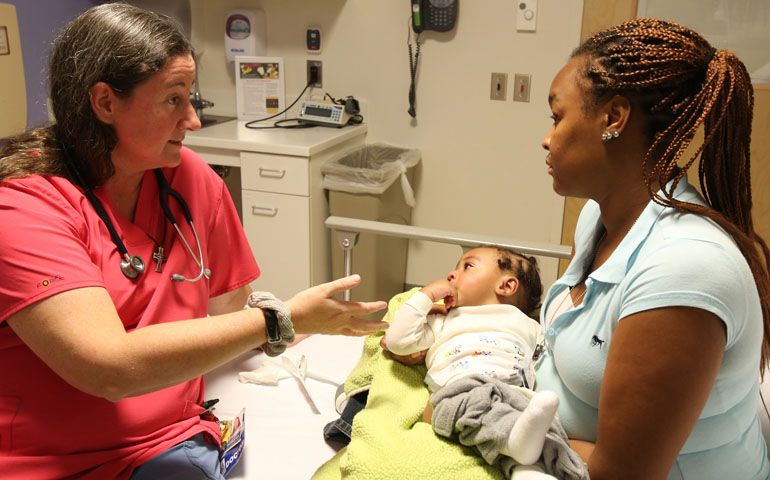 Dr. Karen Schneider, a Mercy sister, talks with the mother of a child in the emergency room at Johns Hopkins Hospital in Baltimore in 2014. (CNS/Bob Roller)

My apologies for no links on Tuesday. My hard drive died suddenly and it took me a day to get a new one. This following is a long list, therefore, but the articles are all still timely.

Christopher Schmidt, writes in The Washington Post on the proposed new division within the Health and Human Services Office for Civil Rights to protect the religious rights of health care employees. He repeats the nonsensical assertion of Louise Melling of the American Civil Liberties Union that this is about "religious objections" versus the "rights of individuals" as if individuals cannot have religious objections, and as if those objections do not enjoy the protection of the First Amendment. Nonetheless, Schmidt raises some interesting points worth considering.

At The American Conservative, Matt Purple on "The Churchill We Misremember." To which I reply: "What 'we,' white man?" Churchill, like all great historical figures, is enormously more complex than some would think, not least because great figures are invoked in later debates as authorities for given positions, whether they really would have backed the position or not. History is as easily manipulated as the present. My rule of thumb: For the great men and women of history — Churchill, Lincoln, Jefferson, Elizabeth, Caesar — once you have completed, say, three biographies of them, you can speak with some authority. Until then, be careful in how you invoke them.

At the Jewish Review of Books, Archbishop Charles Chaput has a fine response to Fr. Romanus Cessario's bizarre defense of the kidnapping of Edgardo Mortara. Of course, the archbishop's ringing endorsement of First Things, where Cessario's article appeared, though indicating the prelate's blinders, nonetheless only adds force to this response. I am never shy about criticizing Chaput and I am delighted to praise him here.

At The Atlantic, Anna Momigliano also looks at the Cessario controversy and makes the point that this is not so much about the church's attitudes towards Jews, as it is about an internal fight within the Catholic Church. We need to be careful about not overstating the case: The residual power of anti-Semitism to raise its ugly head should never, ever be underestimated. But, Momigliano is on to something. This essay by Cathleen Kaveny, that appeared at Commonweal almost a decade ago, calls similar attention to the work of John Murray Cuddihy who looked at the Feeneyites.

And, at The Washington Post, an article about the riff in relations between Poland and Israel after the Polish government enacted a new law forbidding speech about Polish complicity in the Shoah. Who do they think shoveled the ashes and tended the gates at Auschwitz and Birkenau? Who cleaned the ovens at Treblinka? I am half Polish, and I love my Polish heritage, but it is not served by denying complicity in the Shoah, and Poland's future is imperiled if anti-Semitism is allowed to re-emerge into public life.

The National Catholic Register touts itself as presenting the news "from a Catholic perspective." Why, then, run this lengthy interview with Jay Richards of the Catholic University's Busch business school? Richards is Exhibit A in making the case that Catholic social teaching remains the best kept secret in the Catholic Church, trying his best to baptize libertarianism, and failing miserably. And, what to make of this headline at the Register: "How Bishop Athanasius Schneider Became a Leading Voice for Catholic Truth," attached to a sycophantic profile by the Register's Vatican correspondent Edward Pentin. Schneider, one of the few bishops in the world to now be serving for his second stint as an auxiliary (gotta be a story there!) is a leading dissident at the moment, and one who seems to think that the magisterium of the church has moved from Rome to Kazakhstan.

From the "Follow the Money" file and the pages of The Washington Post, the Koch brothers plan to spend $20 million promoting the GOP tax reform. Pretty good return on investment, don't you think? The GOP passes a $1.5 trillion tax cut, the benefits of which go overwhelmingly to the oligarchs, and they spend a mere $20 million to try and convince the American people that this reform was really populist in nature. The Koch brothers are the most sinister people in America, a grave and present danger to American democracy. Yet, Brother Charles gets feted at Catholic University?

In El Nuevo Dia, a look at the vital role grandparents play in raising children. This comes precisely when those pro-family Republicans are trying to end immigration policies that favor family reunification, which they denounce as chain migration. I also think that the implementation of Amoris Laetitia must focus more attention on the importance of the extended family. Conservatives blame the rise in the number of broken families in recent decades on more liberal sexual mores, and there is certainly something to that, but I suspect the decline in the role of extended families has resulted in so much pressure being placed on the nuclear family, that many families can't handle the pressure.

Your thoughts on the reckoning of Catholics and Trump

Your thoughts on AOC as the future of the Catholic Church