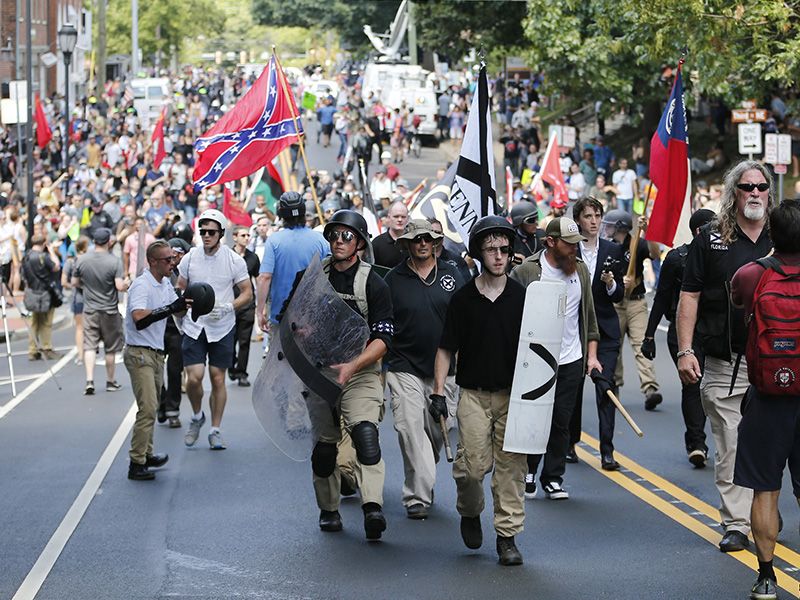 White nationalist demonstrators walk through town after their rally was closed down near Lee Park in Charlottesville, Va., on Aug. 12, 2017. (AP/Steve Helber)

Washington — A group of evangelicals — including a who’s who of Southern Baptist leaders — has written a letter to President Trump calling on him to do more to condemn white supremacists in perhaps the strongest critique to date from a constituency that voted for him in overwhelming numbers.

“We request upon you to join with many other political and religious leaders to proclaim with one voice that the 'alt-right' is racist, evil, and antithetical to a well-ordered, peaceful society,” reads the letter first published by CNN.

“This movement has escaped your disapproval,” it reads.

Without naming names, it further states: “It concerned many of us when three people associated with the alt-right movement were given jobs in the White House.”

The letter comes more than a month after one person was killed and 19 were hurt when a speeding car driven by a white supremacist slammed into a throng of counter-protesters in Charlottesville, Va. Two Virginia State Patrol troopers were killed in a helicopter crash as they were responding to the clashes.

While Trump initially condemned the violence and renounced "white nationalists, white supremacists, the Ku Klux Klan, neo-Nazis and other hate groups” he later said there were "some very fine people" on both sides of the demonstration.”

None of Trump’s evangelical advisors — who have met with the president on numerous occasions and, with the exception of one member who stepped down, have shown unwavering support and confidence in Trump — signed the letter.

The letter concludes by imploring Trump to do more to unify a fractured nation:

"Our country desperately needs unifying leadership again," their letter reads. "We need you, President Trump, to lead us in such an effort. America needs your voice and your convictions to defeat racist ideologies and movements in every form that they present themselves. America is profoundly fractured and divided. We are praying, and call upon God's people to humble themselves and pray that you would take the bold and moral step to denounce the alt-right."

Politics | Evangelical leaders call on Trump to condemn the alt-right