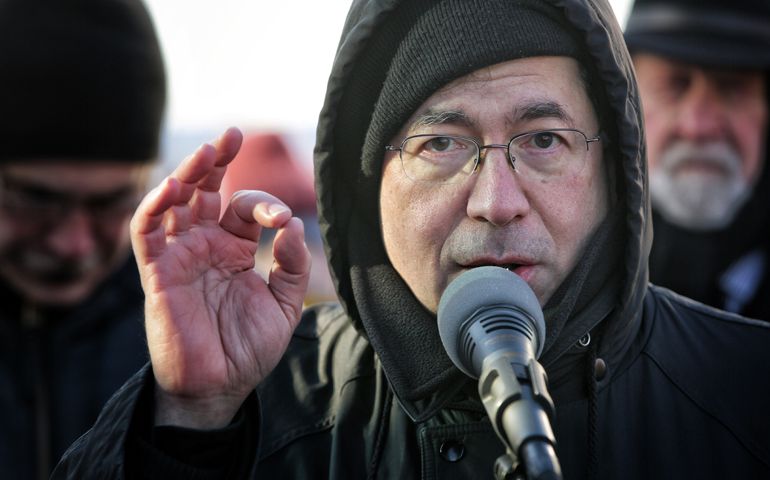 Fr. Frank Pavone speaks during a prayer and protest rally outside of the Planned Parenthood building in Washington Jan. 21, the day before the annual March for Life. (CNS/Lisa Johnston, St. Louis Review)
This article appears in the Election 2016 feature series. View the full series.

Just days before America entered the voting booths, Fr. Frank Pavone placed what he claimed was an aborted fetus on a Catholic church altar, in an effort by the outspoken pro-life priest to illustrate the stark contrasts he saw among the two main presidential candidates when it comes to the issue of abortion.

Pavone, the national director of Priests for Life, broadcast the graphic images Sunday morning through Facebook Live (warning: explicit images). In the video, the priest stands behind the altar with the fetus on the altar and between two lit candles.

"Today I am showing him to you because in this election we have to decide if we will allow this child killing to continue in America or not," he said in a message accompanying the video. "Hillary Clinton and the Democratic platform says yes, let the child-killing continue (and you pay for it); Donald Trump and the Republican platform says no, the child should be protected."

Pavone is a member of Trump's 33-member Catholic advisory council.

In a statement released Tuesday evening, Bishop Patrick Zurek of the Amarillio, Texas diocese, where Pavone is incardinated a priest, said it "deeply regrets the offense and outrage" spurred from the video, which "is against the dignity of human life and is a desecration of the altar. and that it "is not consistent with the beliefs of the Catholic Church."

"We believe that no one who is pro-life can exploit a human body for any reason, especially the body of a fetus," Zurek said.

The bishop clarified that Priests for Life, which is based in Staten Island, N.Y., is not a Catholic, but a civil institution and thereby not under the diocese's supervision. He added that the diocese was opening an investigation of Pavone "about all these matters."

The priest acknowledged at the top of the 44-minute video, which as of Tuesday morning has been viewed more than 356,000 times, that "I'm doing something rather extraordinary." The male child was aborted during the second trimester, Pavone said, and was "entrusted to us" by a pathologist for burial.

"But today we are going to pray with this baby, and let this baby's body bear witness to our nation as we begin the process to elect our next president, our next Senate, Congress, state legislatures, up and down the various levels of government …

"And I am here to present to you today the fact that we have a very simple choice: To elect those who are going to affirm the covenant we have with God, or those who reject it. Those who call the people to obey it, or those who want to rewrite it. And the testimony of Scripture, and the testimony of the life of this child, point to the critical importance of this election," Pavone said.

He continued: "Brothers and sisters, we are about to elect leaders in our country and I am showing you this baby here today because I want to connect this election with the choice of the covenant: with life or with death."

Pavone, along with several other priests and bishops, have argued that, despite misgivings Catholics may hold with both Hillary Clinton and Donald Trump, pro-life issues, like abortion, supersede all other concerns and that Catholics cannot support candidates or political parties who back its use.

Trump, who in the past was pro-choice, says he is now pro-life and against abortion except in cases of rape, incest or the life of the mother is at risk. Clinton, along with the Democratic platform, supports women's health and reproductive rights, which includes access to "safe and legal abortion." She has also pledged to repeal the Hyde Amendment, a longstanding block to federal funding of abortion.

Since its broadcast, the video, part of a nine-day novena Pavone held on Facebook Live leading up to Election Day, has drawn intense outrage.

In a post on the New York archdiocese's blog, titled "A Political Desecration," Ed Mechmann, director of public policy for the archdiocese, said Pavone's actions were "absolutely appalling, and deserves to be repudiated by all of us who consider ourselves to be pro-life in the fullest meaning of that word."

He said the use of graphic images has long been a debate in the pro-life movement, largely focused along the lines of the potential of the images to effect a viewer versus alienation it may cause. In the Pavone video, those actions are beside the point, which Mechmann said turned a body of a human being into an object to be used.

"A human being has been sacrificed and the altar of God has been desecrated, all for politics. Everyone who respects the dignity of every human person should reject and disavow this atrocity," he said.

At Patheos, Scott Eric Alt said "What Fr. Pavone did was a sacrilege," and a violation of canon law.

Pavone has been a lightning rod of controversy in the past, and the video is not the first time he has used an aborted fetus to make a point. In 2013 he held an open-casket funeral for a 14-week-old child who was aborted.

In 2011 he was suspended from ministry outside the Amarillo diocese due to questions about the finances of Priests for Life; at the time, Zurek slammed Pavone's "incorrigible defiance of my legitimate authority as his bishop." During his suspension he continued to raise money for the organization, and lived in a Texas convent where he served as chaplain.

Zurek and Pavone resolved their differences in December 2013. But continued disputes over finances led New York Cardinal Timothy Dolan to cut ties with Pavone and Priests for Life in late-November 2014, two years after the Vatican's Congregation for Clergy said the organization should answer to the New York archbishop.

What does it mean for governance to have an issue-free election?

Abortion number, rate both down, says 'State of Abortion' report