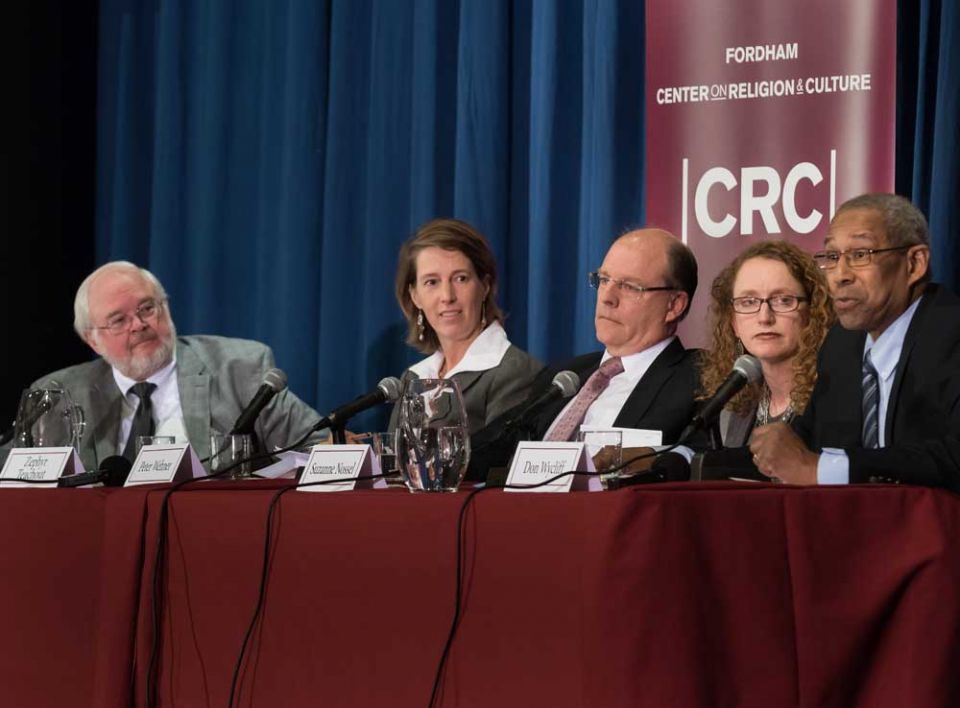 That was the formal theme for a recent panel discussion at Fordham University sponsored by the Jesuit school's Center on Religion and Culture.

It was only a Wednesday (Nov. 29). Yet the week already included the president of the United States retweeting three anti-Muslim videos, employing an ethnic slur against Native Americans while honoring Navajo World War II veterans, and reveling in the downfall of a network news anchor for sex abuse while fighting more than a dozen accusations himself.

That's not even including the peddling of a lie that former President Barack Obama was born in Africa, that the "Access Hollywood" tape America heard with Trump detailing a sexual assault technique somehow was doctored, and reckless rhetoric employed against a nuclear-armed North Korea.

David Gibson, the director of the Center on Religion and Culture, introduced the panel by noting that we live in a time where the nation's leadership has ignored "basic norms of behavior." But it's not all Trump's fault, he said. The election of Trump and the first year of his administration is "more a symptom than a cause." The Fordham panel proceeded to dissect those symptoms.

There were no visible "Make America Great Again" caps among the approximately 500 who nearly filled the Pope Auditorium near Lincoln Center, just a block from Trump's Manhattan hotel and a vigorous walk from Trump Tower itself. If there were Trump supporters in the audience, they were quiet.

John Carr, director of the Initiative on Catholic Social Thought and Public Life at Georgetown University and former U.S. bishops' staffer, argued that Trump uses racism as a political tool. "When Trump is in trouble, it is no coincidence that he tweets about black football players," he said.

Peter Wehner, the lone Republican on the five-person panel, said the nation is in political crisis.

"You can feel it, sense it, and it's in the air," he said. Wehner, senior fellow at the Ethics and Public Policy Center and New York Times columnist, is an evangelical Christian, Republican political activist who worked on Mitt Romney's 2012 campaign, and an anti-Trumper who tried to explain some of the rage that propelled the real estate mogul/reality television star to the White House.

"Any nation that elects Donald Trump has a low view of politics," said Wehner, who commented that Trump adeptly took advantage of a wealth and cultural divide that has alienated middle-class people from politics.

Trump has taken advantage of political factors that already existed, said Wehner, including growing income disparity and a political "Big Sort," in which liberal Democrats have largely clustered on both coasts while the middle of the country and rural America has become more conservative.

Wehner said we have entered a "post-truth" period, illustrated by the White House statement from spokesperson Sarah Huckabee Sanders that gauging the veracity of the video peddled by Trump promoting white supremacy is not important.

Trump, said Wehner, "doesn't want to attack the truth, he wants to annihilate it."

Chicago journalist Don Wycliff said he entered the University of Notre Dame in 1965, inspired to study politics through the examples of the civil rights movement and the idealism sparked by John F. Kennedy. The election of Trump, he said, shook his faith in the political system.

"The question of our moral center is very much in the air," he said, adding that last year's campaign made him wonder if Trump's base supported the American ideal that all people are created equal.

Panelist Suzanne Nossel, executive director of PEN America, an organization devoted to First Amendment rights, argued that the political crisis is aggravated by the promotion of fake news via social media and the White House's assault on the mainstream media reporting on news it doesn't like.

The American public is increasingly seeking out news that reinforces pre-existing viewpoints, with conservatives tuning to FOX News and Breitbart News, while liberals seek out CNN and MSNBC, as well as The New York Times and The Washington Post.

The media polarization makes political compromise impossible and gets in the way of functioning government, she said. Cynicism of motives is a regular part of political life and there is a general ignorance of civics.

Zephyr Teachout, a professor at Fordham Law School, said that she traveled extensively through the Hudson Valley, New York, district where she was the Democratic candidate for Congress last year.

It was a district that went for Obama by 6 percent in 2012 and then went to Trump by 9 percent.

"What I saw was an incredible amount of loneliness," she said, noting that the hollowed-out small towns in the district were bereft of basic stores and services. In many of the towns, there was no shop to buy basics such as socks and underwear, an indication, she said, that corporate behemoths have squeezed out small businesses vital to nurturing small communities.

Carr contrasted the two great political surprises of the century, the elections of Trump and Pope Francis.

"They couldn't be more different," he said, noting the pope's pro-immigrant views and focus on the poor. But they both were outsiders who challenged the status quo.

America's political parties, he said, peddle two kinds of individualism. For Republicans, it's the worship of the free market, for Democrats, it's the exalting of cultural freedom over all other values, he said.

"It leads to tribalism," said Carr, reflected in the Alabama Senate race where a credibly-accused child molester has a more than even chance of being elected.

If American life has lost its moral center, how can it be regained?

Wehner counseled perspective. The U.S. has survived worse, including a Civil War. He urged politicians to argue for the value of politics, to promote the need for negotiation, compromise and working with political opponents for the common good.

Nossel promoted media literacy, helping news consumers judge what is legitimate news and what is not.

Teachout argued that new big business behemoths, such as Google and Amazon, have too much power and should be subject to anti-monopoly laws. The country needs a decentralizing of economic power, she said, and a diminishing of the impact of money in political races.

Carr argued for a "sanity caucus" of Democrats and Republicans of moderate views who can work together and address the concerns of poverty.

The prescriptions differed, but the belief that the U.S. faces a moral crisis was consistent.

"Something has changed," said Wycliff, expressing a sentiment that resonated with his fellow panelists and the Manhattan crowd. They agreed that the road back to a moral center will not be an easy one.

[Peter Feuerherd is a frequent contributor to NCR and a Field Hospital correspondent.]