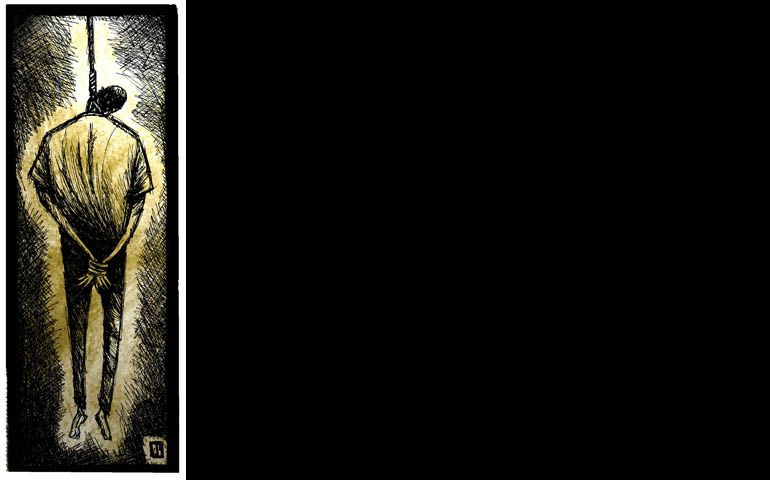 Christians celebrate life and the budding seeds of God's new creation through Easter. We jubilantly celebrate light, life and freedom this liturgical season.

We see light in the darkness of inhumanity because we interpret the world through the cross and suffering of Jesus, who is the seed of new life.

As M. Shawn Copeland observes in Enfleshing Freedom, the cross becomes cheap grace or a simplistic solution to the problem of evil if we do not interpret the cross in light of the "unmeasured suffering and anguish" of lynching in America.

Lynching is inextricably tied to how racial injustice and the death penalty are performed in the United States today.

Copeland invites us to remember, in the words of James Cone, how "the lynching tree can liberate the cross from false pieties of well-meaning Christians. ... The cross can redeem the lynching tree, and thereby bestow upon lynched black bodies an eschatological meaning for their ultimate existence."

Solidarity begins, Copeland rightfully contends, in the intentional remembering of the black victims of lynching, who, with Jesus, are martyrs for freedom in this land.

The Equal Justice Initiative in Montgomery, Ala., finds in its new study, "Lynching in America: Confronting the Legacy of Racial Terror," that "an astonishing absence of any effort to acknowledge, discuss, or address lynching" remains in the communities where this form of racial terror was most prevalent.

Most astonishingly, this includes our churches. Forgetfulness of lynching and the death penalty in America demonstrate an appalling apostasy on behalf of Christians who tolerate this evil.

This legacy endures in the states of Texas, Mississippi, Alabama, Georgia, Florida and my home state of Louisiana.

Scholars call these "Death Belt" states because of the high correlation they find between the history of lynching against African-Americans and today's disproportionate arrests, prosecution, and sentencing to death of African-Americans. We deem these unworthy of life along with the economically poor and people who are mentally or psychologically disabled.

The correlation between the practice of lynching and the death penalty goes down to the parish/county level. Phillips, Ark., leads all counties in the nation with 243 lynchings between 1877 and 1950, and the Louisiana parishes of Caddo, Lafourche, Tensas and Ouachita round out the top five counties nationally.

Today, Caddo leads Louisiana in death penalty convictions. Caddo provides a case in point of the relationship between lynching and the death penalty. It also offers hope.

The following is not the impassioned plea of a death row inmate fighting for his life or an extreme left-winger:

The clear reality is that the death penalty is an anathema to any society that purports to call itself civilized. It is an abomination that continues to scar the fibers of this society and it will continue to do so until this barbaric penalty is outlawed. Until then, we live in a land that condones state assisted revenge and that is not justice in any form or fashion.

These are the words of a former district attorney who routinely and proudly sought the death penalty in Caddo Parish. At least, until he recently recognized that he sent an innocent man to death.

A.M. "Marty" Stroud III, formerly the first assistant district attorney in Caddo Parish, performed a rare, courageous act: He publicly apologized to Glenn Ford for wrongfully convicting him more than 30 years ago and called on the state of Louisiana to provide a modicum of justice by paying restitution.

In a statement published in the Shreveport Times, Stroud forthrightly admits, "We are simply incapable of devising a system that can fairly and impartially impose a sentence of death because we are all fallible human beings."

Ford has claimed innocence ever since he was first arrested and charged with fatally shooting a Shreveport jewelry store owner during a 1983 robbery. Ford was released from Angola's death row on March 11, 2014, after the state admitted its wrongful conviction.

Louisiana's state attorney general, Buddy Caldwell, is denying restitution to Ford. Although Ford is dying of cancer, he is fighting for the compensation in order to pave the way for restitution for future exonerees.

In apologizing to Ford, Stroud said: "I end with the hope that providence will have more mercy for me than I showed Glenn Ford. But, I am also sobered by the realization that I certainly am not deserving of it."

I am sobered with Stroud and wonder: Whose side are we on?

This Easter season, do we stand on the side of the system -- the machinery of death -- or do we live Easter hope by proclaiming "liberty to captives" (Luke 4:18)?

An ultimate question of our faith rests in whether and how we remember Jesus in the condemned of our past and present: the depth of our shared witness to the life, death and resurrection of Jesus Christ.

[Alex Mikulich is co-author of The Scandal of White Complicity in U.S. Hyper-incarceration: A Nonviolent Spirituality of White Resistance.]