Overcharging and underperforming in the clubby world of military contracts 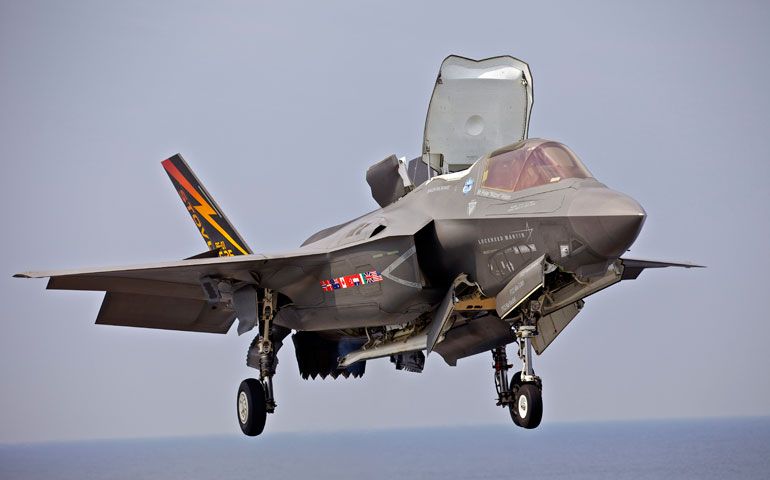 An F-35 Lightning II aircraft hovers prior to landing on the flight deck of the amphibious assault ship USS Wasp in August 2013. (Newscom/Polaris)

As a verb, botch shows up mostly in news stories about messed-up death row executions. But another kind of botching has been on display of late, compliments of Lockheed Martin, the military contractor based in Bethesda, Md. The nation's largest maker of killing machines has consistently botched delivering the F-35 fighter jet to its loyal customers -- the U.S. Navy, Marines and Air Force.

In early July, the missile-firing and bomb-dropping warplane was plagued with so many technical and operational dysfunctions that an embarrassed Pentagon was forced to back out of showboating it at an international arms bazaar in England.

On what Lockheed's growing chorus of critics call "the F-35 glitch list," the problems range from cockpit headrests that obstruct visibility to compression difficulties with the driveshaft. Last year, 719 flaws -- major to minor -- were reported by the Pentagon's inspector general.

Of the plane, which first flew in 2006 after development began several years before, a preening Lockheed executive has boasted: "The F-35 Lightning II will carry on the legacy of two of the greatest and most capable fighter aircraft of all time. Just as the P-38 and the British Lightning were at the top in their day, the F-35 will redefine multi-role fighter capability in the 21st century."

Such bluster could be dismissed as self-serving hype, except that it has been enough to dupe one congressional committee after another, one Pentagon warlord after another, and one White House after another to keep saluting -- and spending.

The estimated cost for building and maintaining more than 2,400 of the turkeys in the next 25 years is $1 trillion. In March 2012, the Government Accountability Office reported a cost overrun of $1 billion for the first 63 F-35s. The original procurement price has nearly doubled, as well as running years behind schedule.

The Department of Defense is all but defenseless against a gouging shakedown artist like Lockheed Martin, with its massive jet-propelled lobbying and PR machine ever ready to defend the plane against pre-emptive strikes to cancel or cut back production. Overcharging and underperforming are all but automatic in the clubby world of military contracts.

As Lockheed Martin consistently gets away with screw-ups and flouting what should be a basic ethic of commerce -- keeping your contractual word -- it excels in another field. The Project on Government Oversight, a Washington nonprofit whose work includes eyeing corporate chiseling, reported that between 1995 and 2009, the company had "50 instances of civil, criminal or administrative misconduct" and paid $606 million in fines and penalties.

In the 1994 book And Weapons for All: How America's Multibillion-Dollar Arms Trade Warps Our Foreign Policy and Subverts Democracy At Home, William Hartung of the New America Foundation exposes the culture of bribery, payoffs and assorted commissions that prevails to enlist customers. He reports that between 1971 and 1975, Lockheed Martin's lust for foreign sales led it to shovel "over $200 million in improper payments abroad to officials in Turkey, Indonesia, Saudi Arabia, Italy, Japan and West Germany."

In a follow-up 2010 book, the equally incisive Prophets of War: Lockheed Martin and the Making of the Military-Industrial Complex, Hartung, in a chapter titled "Bribery," cites A. Carl Kotchian, a former president of the company, on how he rang up sales in the 1970s: "Some call it gratuities. Some call them questionable payments. Some call it extortion. Some call it grease. Some call it bribery. I looked at all these payments as necessary to sell a product. I never felt I was doing anything wrong. ... It was a standard thing."

Whether measured by bloated military budgets or violent interventions abroad, the United States reigns as the world's most militaristic nation. In cozy lockstep is Lockheed Martin, the world's largest weapons maker and exporter, with a staggering backlist ranging from Trident missiles to cluster bombs. Owing in large part to the Obama arms procurement policies, at the end of July, Lockheed Martin's stock had risen 41 percent in a year.

Voices like Hartung, William Blum in Freeing the World to Death: Essays on the American Empire, Amy Goodman on Democracy Now, Gordon Adams in The Politics of Defense Contracting: The Iron Triangle and groups like the Project on Government Oversight deserve immense credit for exposing the reckless collusion between the makers, buyers and users of weapons. If ever the United States chovoses to move in another direction -- less lethal, more rational -- they and other prophets of peace should be thanked.

Column | Overcharging and underperforming in the clubby world of military contracts

Your thoughts on the US bishops' Communion document

Data mining gets religion as campaigns target voters of faith