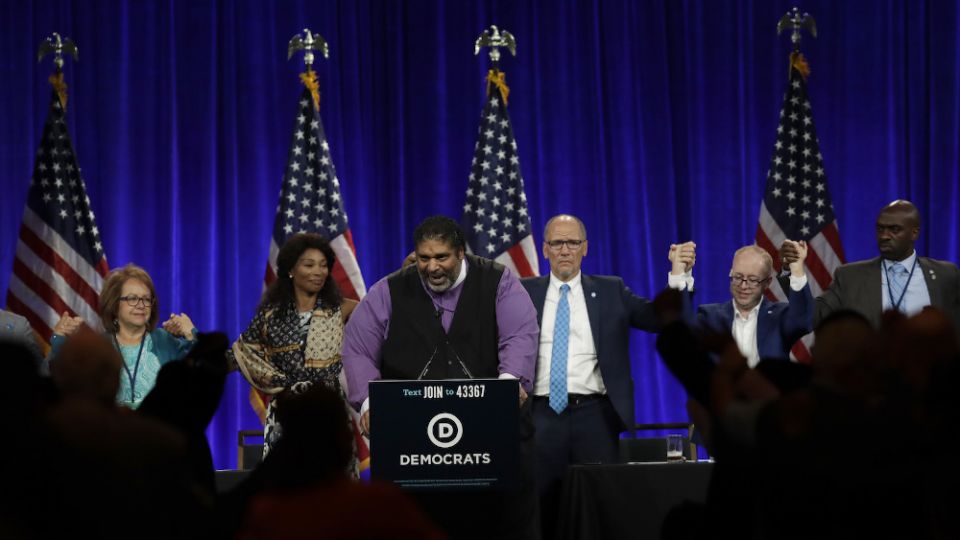 The Rev. William Barber II, a progressive activist and pastor, addressed the executive committee of the Democratic National Committee on Aug. 23, calling on party leaders to host a presidential debate focused on poverty and to do more to address the concerns of poor and low-income Americans.

The co-chair of the Poor People's Campaign, named for the last major campaign of Martin Luther King Jr., Barber insisted that poverty touches all people and regions of the United States and overlaps with related concerns such as racism, voter suppression, healthcare, "ecological justice," militarism and religious nationalism.

"We have to say the word, 'Poverty,'" said Barber, according to a copy of his remarks provided to Religion News Service. "We need to lift up the stories of folks in Appalachia and Kansas and the Mississippi Delta. We need to hold them alongside the folks in our gentrifying cities, some of whom work two jobs and still sleep in their cars at night."

The speech, delivered during the DNC's summer meeting in San Francisco, California, comes as Democratic primary candidates are jostling for votes among the party’s progressive base, for whom Barber has become an increasingly visible leader since speaking at the 2016 Democratic Convention.

When Barber concluded his speech, many in the room leapt to their feet in raucous applause as DNC Chair Tom Perez declared "Let the church say, 'Amen!'" Perez then called on those present to take a moment of contemplative silence.

Officials from the Poor People's Campaign said Barber planned on calling for a Democratic debate on the topic of poverty, but the chances of having such a debate are slim. In June, DNC officials told RNS that the party does not intend to hold single-issue debates. On Aug. 22, the DNC resolutions committee voted 17-8 against holding a debate focused on climate change, sparking outrage among environmental activists.

Asked about a potential poverty debate at a candidate forum hosted by the Poor People's Campaign in June, however, all nine Democratic presidential hopefuls who attended — including former Vice President Joe Biden and Sens. Elizabeth Warren, Bernie Sanders, and Kamala Harris — said they would support it.

The Poor People's Campaign, which now has established chapters in more than 40 states, has long championed the notion of creating a "new electorate" of poor and low-income Americans, who are often less likely to vote than other Americans. If mobilized, Barber and his allies argue, the less well-off could potentially swing elections.

In his address, Barber announced his intention to launch a nine-month, 22-stop "We Will Do MORE" campaign focused on mobilizing, organizing, registering and educating poorer Americans.

In a statement issued before Barber's address, the Poor People's Campaign noted that it was not meant to endorse any party or politician, adding that officials also reached out to the Republican Party but have not yet heard back. In addition, Barber argued in his speech that the issue of poverty is not about "left versus right, but right versus wrong."

Even so, the pastor, who helped lead North Carolina's Moral Mondays protests credited with helping to unseat the state's Republican governor in 2016 — had harsh words for Republican Senate Majority Leader Mitch McConnell, comparing his decision to block efforts to pass voting rights legislation to infamous segregationist Strom Thurmond's decision to filibuster the Civil Rights Act in 1957.

Barber also voiced thinly veiled criticism of the Trump administration's policies and of Christians who support them.

"For too long, faith has been hijacked by those who say abortion and sexuality are the only moral issues," Barber said. "They tell religious people to vote their pro-life/pro-family values, then they use their political power to pass policies that keep families in poverty, separate families at the border, keep families from getting healthcare and endanger the lives of children in schools, worshipers in churches and the planet itself."

He invoked scripture to dismiss claims that polices designed to help the poor would be tantamount to socialism.

"If someone calls it socialism, then we must compel them to acknowledge that the Bible promotes socialism," he said. "This current administration is practicing socialism to corporations and the greedy through tax cuts, deregulation and economic incentives. And then they refuse to bail out communities and human beings."

"When we have 26 presidential debates and not one hour is focused on living wages, we must have a movement," Barber said in his speech, referring to past presidential election cycles.

He later added: "We need a revolution of values in public life, and we need leadership that will draw on our deepest religious and Constitutional traditions to fight not only for what seems achievable, but for what is our moral duty."

Barber and the Poor People's Campaign have already exhibited unusual influence on the 2020 Democratic primary. South Bend, Indiana, Mayor Pete Buttigieg, bearing "silent witness," showed up at a protest Barber and his co-chair, the Rev. Liz Theoharis, held outside the White House in June to decry the Trump administration's policies.

Buttigieg later referred to Barber while speaking at a Black Church PAC event in August. Joe Biden, too, has referenced arguments made by the Poor People's Campaign when making claims about widespread poverty in the U.S.