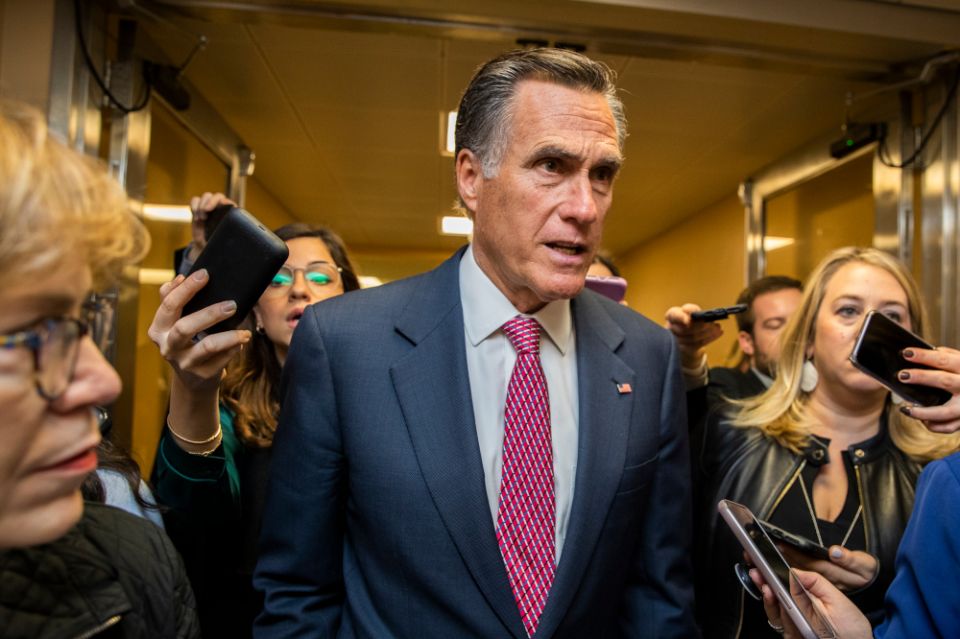 Sen. Mitt Romney, R-Utah, speaks to reporters as he arrives at the Capitol in Washington, Jan. 27, 2020, during the impeachment trial of President Donald Trump on charges of abuse of power and obstruction of Congress. (AP/Manuel Balce Ceneta)

Utah senator and Republican Mitt Romney declared his intention to vote to convict President Donald Trump of abuse of power, explaining he is compelled to do so in part by his faith as a member of The Church of Jesus Christ of Latter-day Saints.

Romney grew visibly emotional on the Senate floor Feb. 5, while discussing the role of his faith in the decision.

“I am profoundly religious. My faith is at the heart of who I am,” he said, taking a long pause to collect himself. “I take an oath before God as enormously consequential.”

Throughout his speech, Romney pointed to the “oath before God” he had made to exercise impartial judgment as a senator-juror in the impeachment trial.

That oath, he said, “demanded” he vote to convict the president on the first of two articles of impeachment: abuse of power.

The senator said it was clear from the evidence presented that Trump had asked Ukraine to investigate his political rival, former vice president and current Democratic presidential candidate Joe Biden, and had withheld military funds from the country to pressure it to do so.

Romney said he supports much of what Trump has done as president and has received many calls encouraging him to side with other Republicans on the impeachment vote.

“But my promise before God to apply impartial justice required that I put my personal feelings and biases aside,” he said. “Were I to ignore the evidence that has been presented, and disregard what I believe my oath and the Constitution demands of me for the sake of a partisan end, it would, I fear, expose my character to history’s rebuke and the censure of my own conscience.”

He also said he knows he will be denounced for his vote by his fellow Utahns and Republicans, as well as the president and his supporters.

“Does anyone seriously believe that I would consent to these consequences other than from an inescapable conviction that my oath before God demanded it of me?” he said.

In a separate interview with The Atlantic conducted before his speech and published after, Romney said he was guided throughout Trump’s impeachment trial by his father’s favorite verse of the church’s scriptures: “Search diligently, pray always, and be believing, and all things shall work together for your good.”

He added: “I have gone through a process of very thorough analysis and searching, and I have prayed through this process. But I don’t pretend that God told me what to do.”

Romney has been vocally critical of Trump for years, calling him a “fraud” in 2016 and accusing him of “twisting the Constitution to limit First Amendment freedom of the press.”

His appeal to faith is likely to find a receptive audience among his fellow members of The Church of Jesus Christ of Latter-day Saints in the Beehive State. Despite being one of the most reliably Republican religious groups in the United States, members of the religious group have long been noticeably hesitant to embrace Trump — especially in Utah.

Trump placed a distant third in heavily Mormon Utah’s 2016 GOP caucus and was unable to garner a majority of the vote in the general election (Trump walked away with 45.1% of the vote, with Democrat Hillary Clinton and Independent Evan McMullin essentially splitting the rest with 27.2% and 21.3%, respectively). By comparison, 72.6% of Utahns supported Romney when he ran for president in 2012.

Only 61% of people who belonged to The Church of Jesus Christ of Latter-day Saints did the same.

The church also took the rare step of issuing a public statement implicitly criticizing Trump in December 2015, when he first proposed banning Muslims from entering the country.

“The Church of Jesus Christ of Latter-day Saints is neutral in regard to party politics and election campaigns,” the statement read in part. “However, it is not neutral in relation to religious freedom.”

Trump’s troubles with the group have persisted throughout his presidency. According to a Democracy Fund + UCLA Nationscape study analyzed by Business Insider, only 58% of voters from the group said they would back the president over Biden. Slightly more than half (52%) have a favorable view of Trump, and 43% have an unfavorable opinion of him.

Romney’s reference to the U.S. Constitution also has religious significance: Members of the church believe the document to be  “divinely inspired.”

Trump: Another unconvincing stab at statesmanship