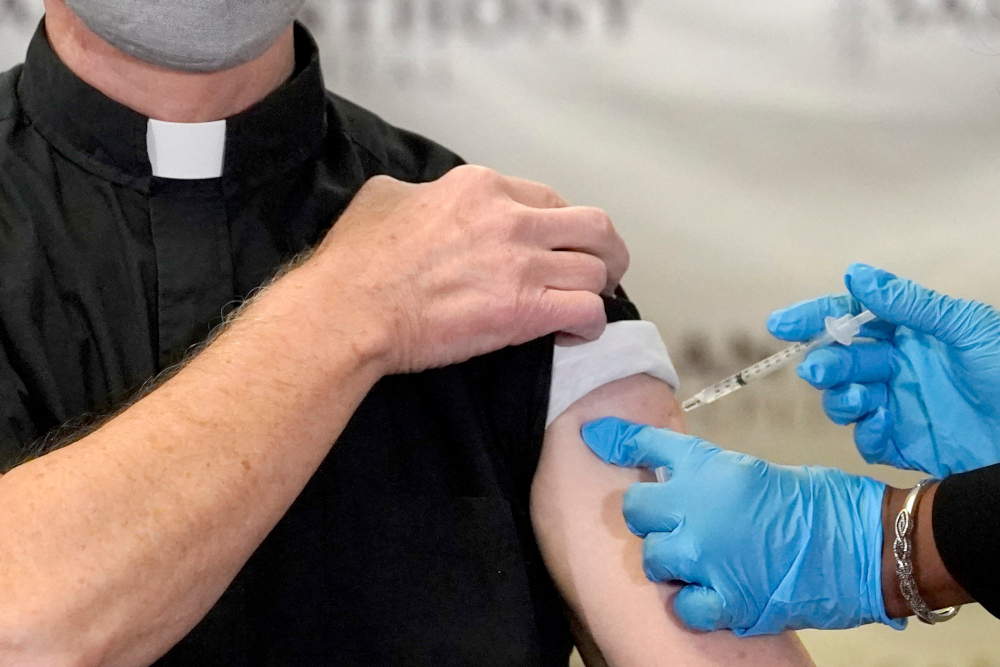 In this Wednesday, Dec. 23, 2020 file photo, a Catholic pastor receives the first of the two Pfizer-BioNTech COVID-19 vaccinations at a hospital in Chicago. In a growing consensus, religious leaders at the forefront of the anti-abortion movement in the United States are telling their followers that the leading vaccines available to combat COVID-19 are acceptable to take, given their remote and indirect connection to lines of cells derived from aborted fetuses. (AP/Charles Rex Arbogast)

When U.S. Trade Representative Katherine Tai announced on May 5 that the White House would back efforts to suspend intellectual property rights for COVID-19 vaccines, it was a victory for Vatican officials and U.S. Catholic groups that had long supported loosening vaccine patents to help expand production of the life-saving shots.

The decision came after a months-long campaign to convince the White House of the wisdom of the move spearheaded by Asian and African nations but aided by the Vatican and U.S. Catholic groups.

And as negotiations continue at the World Trade Organization on what the waivers will look like, President Joe Biden, the second Catholic president in U.S. history, may end up leaning further on Pope Francis and his team at the Vatican.

The proposal to waive the patents was first put before the WTO in October, when India and South Africa called on the organization's 164 member nations to stop enforcing a wide range of patents related to COVID-19 for the duration of the pandemic. The Holy See was among the first to back the proposal, while the Trump administration joined the United Kingdom and other nations in blocking it.

Two months later, during his annual Christmas message, Francis signaled his own support for waiving patents. The pontiff highlighted the vaccines as one of "various lights of hope," but he warned against "forms of nationalism," insisting the shots "need to be available to all."

"I cannot place myself ahead of others, letting the law of the marketplace and patents take precedence over the law of love and the health of humanity," Francis said. "I ask everyone — government leaders, businesses, international organizations — to foster cooperation and not competition, and to seek a solution for everyone: vaccines for all, especially for the most vulnerable and needy of all regions of the planet."

A few days later, the Vatican's COVID-19 Commission, which answers directly to the pope, published a document titled "Vaccine for all: 20 points for a fairer and healthier world." The document invoked Francis' address in a section on vaccine patents, arguing the world should "consider the vaccine as a good to which everyone should have access, without discrimination, according to the principle of the universal destination of goods."

Then, in February, in a speech before the WTO, Archbishop Ivan Jurkovič, the Vatican's permanent observer at the United Nations, spelled out the Holy See's position again, quoting Francis' view that vaccine waivers could benefit "the entire human family."

The pope's position on medical patents dates to long before the pandemic. In November 2015, in a speech to the United Nations office in Nairobi, Kenya, Francis was among the first world leaders to call for international organizations to "be a means for ensuring a minimum of health care and access to basic treatment for all," in part by waiving intellectual property rights.

"The Holy See has the freedom to bring some subjects at the center of the agenda, seeing the implications for the whole human family, not just one particular state," said Carlo Maria Merenghi, legal council for economic and commercial affairs at the Permanent Mission of the Holy See to the United Nations and the World Trade Organization, in an interview with RNS.

As soon as President Biden was inaugurated, Catholics at home began lobbying his administration fiercely about vaccine patents. The pressure mostly came from Network, a Catholic social justice lobby best known for its support of the "nuns on the bus" tour that fought for anti-poverty spending and other liberal causes. Network was part of a small group of advocacy organizations that met with Tai, the trade representative, in April to push for the vaccine waiver.

A Network spokesperson told RNS its chief lobbyist also followed up with Tai separately to press the issue.

"Network has been trying to get this message through to the White House for a very long time," the spokesperson said. 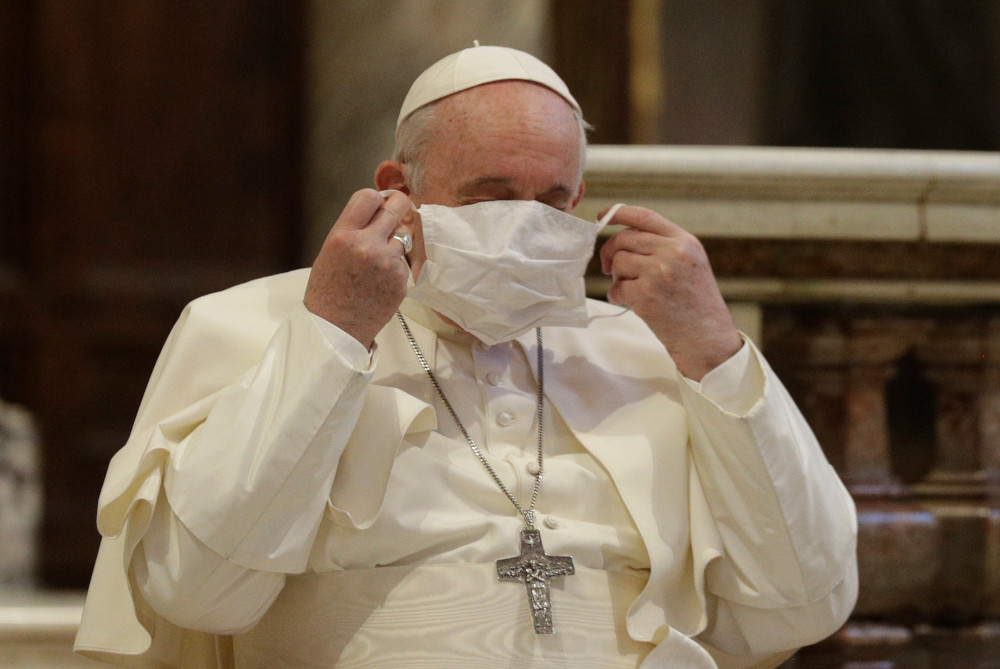 In this Tuesday, Oct. 20, 2020 file photo, Pope Francis puts on his face mask as he attends an inter-religious ceremony for peace in the Basilica of Santa Maria in Aracoeli, in Rome. Pope Francis’ decision to forego wearing a face mask has been noticed, with some concern, by the commission of Vatican experts he appointed to help chart the Catholic Church’s path through the coronavirus pandemic and the aftermath. (AP File/Gregorio Borgia)

They were up against some powerful foes. Pharmaceutical companies lobbied hard against patent waivers, arguing doing so could create shortages of raw materials required to make the vaccines. They also said it would take too long for other countries to build the specialized facilities required to produce the vaccines. Influential voices like Bill Gates also opposed the idea.

The advocacy groups also got no support from the U.S. Conference of Catholic Bishops, despite that group's issued March pastoral message calling for vaccines to be universally available. A spokesperson explained the bishops' conference "was not involved in the advocacy of COVID vaccine patents."

But Sr. Simone Campbell, until recently the executive director of Network and a frequent ally to Biden, pressed contacts to facilitate conversations between the Vatican and the White House and connected members of Congress with bishops sympathetic to the cause.

"It is our moral duty to alleviate the suffering wrought by COVID-19," Campbell wrote with Paul Farmer, the Catholic co-founder of Partners In Health. "Only a people's vaccine that is accessible to all will end the pandemic."

When Tai announced the next day that the White House would advocate to waive the patents, it was greeted as a game-changer.

"If the United States begins to lead this process, we believe the world will follow," Sr. Alessandra Smerilli, a member of the Vatican's COVID-19 Commission, told RNS. "We welcome this news with joy."

But Vatican officials were already thinking about next steps. Smerilli — who also serves as an undersecretary of the Dicastery for Promoting Integral Human Development — expressed concern that the vaccine-makers be ready to transfer their know-how to countries so they begin producing vaccines immediately should WTO negotiations result in patent waivers.

The Rev. Augusto Zampini, one of the directors of the Vatican's COVID-19 Commission, urged that the negotiations focus specifically on the COVID-19 vaccines instead of the broader array of intellectual property rights mentioned in the original proposal offered last year.

"Rather than discussing all medicines, we would like to focus on the COVID vaccine in particular, because otherwise you end up discussing and not agreeing on anything," he said.

Zampini said the Vatican plans to continue pressuring nations on the issue — particularly at the WTO. During an online conference last week, the Vatican brought together an array of health experts, including Biden's top medical adviser, Dr. Anthony Fauci, and the CEOs of Pfizer and Moderna, to discuss vaccine hesitancy, distribution and production.

When it comes to vaccine patents, "Pope Francis is very involved," said Zampini.

Indeed, the pontiff personally waded into the debate on May 8 during a pre-recorded video message to a vaccine-related fundraising concert sponsored by Britain's Prince Harry and singer Jennifer Lopez, saying God "instills in our hearts" a "generous spirit" of justice that "mobilizes us to ensure universal access to vaccines and the temporary suspension of intellectual property rights."

Francis may have surprised some of his own staff: Zampini expressed doubts during his interview with RNS that the pope would speak out specifically about vaccine patents.

But the pontiff was unequivocal in his remarks over the weekend, making clear just how seriously he takes the issue.

"A variant of this virus is closed nationalism, which prevents, for example, an internationalism of vaccines," Francis said. "Another variant is when we put the laws of the market or intellectual property over the laws of love and the health of humanity."