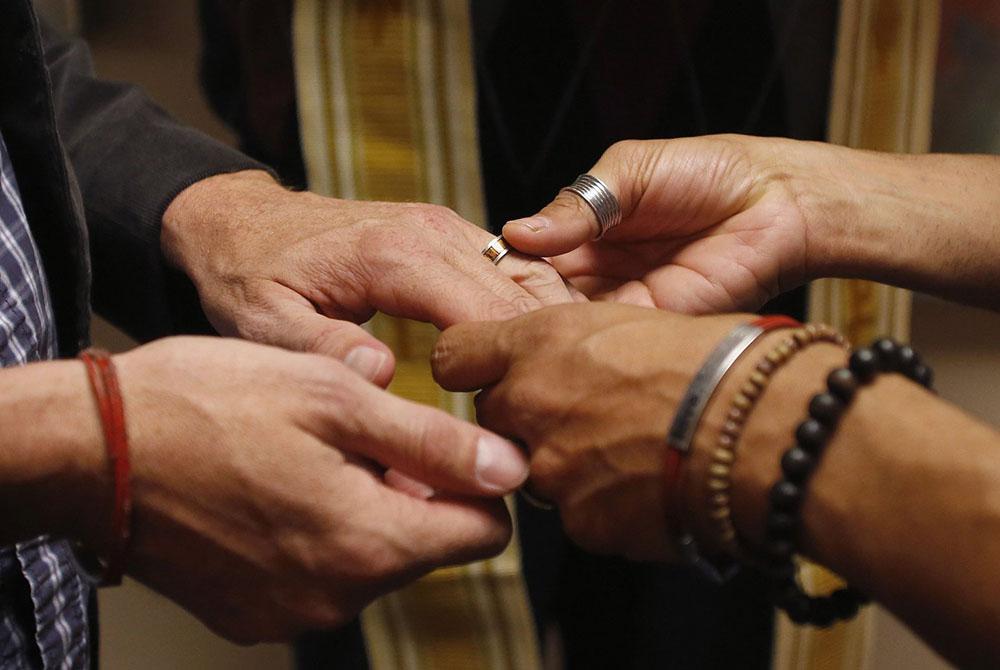 A same-sex couple is pictured in a file photo exchanging rings during a ceremony in Salt Lake City. In a new documentary, Pope Francis expressed openness to the idea of laws recognizing civil unions, including for gay couples, to protect their rights. (CNS/Reuters/Jim Urquhar)

While Pope Francis has supported civil unions for same-sex couples for years, his comments in a new documentary that gay couples "have a right to be part of the family" and that civil unions are a way to legally protect their relationships have been hailed a major step forward by LGBT Catholics, while others note that there has been no actual change to church doctrine.

"This is wonderful news for the LGBT community and for their families," said Jeannine Gramick, a Sister of Loretto who has been involved in a pastoral ministry for lesbian and gay Catholics since 1971. "What Pope Francis is telling us is that lesbian and gay people are part of families. He's holding up family values and this is so important."

Gramick told NCR that the pope's comments were in response to a "beautiful letter" from a gay couple who wrote to him inquiring how they should raise their children and live as a married couple in a church that ultimately does not accept their marriage.

"You are a normal family. You have to do what Catholics do," was effectively the pope's response, she said in describing the context.

"What Pope Francis is telling us is that lesbian and gay people are part of families. He's holding up family values and this is so important."
—Sr. Jeannine Gramick

J.R. Zerkowski, the executive director of Fortunate Families, a ministry for LGBTQ+ Catholics and their families, concurred with Gramick saying that "Pope Francis has recognized the justice that is given to gay couples by virtue of civil unions."

"I'm delighted that he said the words and that he spoke out as a matter of justice for gay people," he said, while adding "I believe it's nothing outside of Catholic social teaching. Shocking as it is, it's sort of not shocking as well. Obviously it's not the first time he's spoken about the topic."

Some noted that the immediate frenzy around the pope's comments was to be expected, given how the pope made headlines in 2013 when he said "Who am I to judge?" in response to a reporter's question about a gay priest.

Lisa Fullam, a professor of moral theology at the Jesuit School of Theology of Santa Clara University, California, warned that any time a pope talks about sex, he's going to get attention.

"When something new comes out from the pope, people look for changes in teaching. I think they saw this as a change of teaching, even though the pope has spoken this way in the past," she said.

"Sexual issues in the church of any kind are the subject to a kind of neuralgic response that is out of keeping with the actual importance of sexual issues in Catholic tradition generally, in comparison to, say, Christology," Fullam told NCR. "Every time that it is reiterated that the pope has said something that might change what some regard as bedrock Catholic doctrine then it gets people excited."

Fullam said that the fact that his comments are being heard two weeks from a heated presidential election in the United States, in which social issues have galvanized voters, has helped fuel the discussion, adding that it's important to remember that his comments were made in an interview, not a papal document.

"What I find notable as a theologian is that what this, in effect, does is passes off the question of lesbian and gay people's relations to the civil sphere," she said. "It kind of cuts the church off from recognition of same-sex relationships."

"If you look only at the civil sphere, you could think of civil unions as perhaps a step toward marriage equality, but in the church sphere I think this is ducking the question," said Fullam.

Peter Cajka, a visiting assistant teaching professor at the University of Notre Dame who focuses on Catholic intellectual history, told NCR that the pope's comments continue a trend that has been in motion since the early 20th century of "the church leaving certain big decisions to secular states and no longer trying to say that the Catholic Church should make those moral decisions."

He said that there has been a "long running evolution of hands-off approach to letting democratic states make certain decisions legally," and Francis is following that direction.

"He's not so much liberalizing [Catholic] tradition as he is extending it," said Cajka.

"Catholics place a huge premium on the family as the union that properly develops the individual and what he's saying is that gay couples have a right to be members of families in a sense of building those relationships in that specific community then in which to raise children," Cajka told NCR.

"He's also saying that every individual is a member of God's family, has dignity, therefore, deserves protection from the civil state under the law," Cajka noted. He also said that he expects there will be a "big debate" over what this means for church teaching in the same way in which the church continues to grapple with issues like contraception, divorce and remarriage and employment issues affecting gay married people who work for Catholic institutions.

As that debate continues to play out, many LGBT Catholics and other allies and activists see the pope's words as progress.

Samantha Power, former U.S. ambassador to the United Nations,* took to Twitter to predict that the pope's comments will "have a profound impact on how gays and lesbians are treated around the world."

"The Pope's views, heard by the over 1 billion Catholics worldwide, have incredible power," she added.

Alphonso David, president of the Human Rights Campaign, echoed those sentiments in a statement, saying, "Pope Francis took a significant step for inclusion and acceptance in the Catholic Church by embracing unions for same-sex couples and affirming that LGBTQ Catholics are a part of their religious family."

"While we at the Human Rights Campaign acknowledge this moment," he added, "we continue to push the Catholic Church, and all religious leaders, to fully embrace LGBTQ people and endorse marriage equality for same-sex couples, our right to have families, and to be full members of our faith communities."

Dignity USA, one of the nation's leading advocacy groups for LGBTQ Catholics, also said that while encouraged by his comments, they see the pope's words as hard to square with the Catholic catechism.

While most members of the U.S. hierarchy have yet to comment on the pope's words, Bishop Thomas Tobin of Providence, Rhode Island, said in a statement on Wednesday that the pope's words "clearly contradicts what has been long-standing teaching" and that the church "cannot support the acceptance of objectively immoral relationships."

Bishop David Zubik of Pittsburgh also issued a statement saying Francis' comments "no way signal a departure from the teaching of the Catholic Church concerning marriage or homosexuality. It speaks, rather, of a pastoral approach to these issues."

"From the amount of phone calls, emails, texts and Facebook messages I've received already today, I would say that gay Catholics that are reaching out to me feel hope-filled."
—J.R. Zerkowski

Yet for grassroots activists like allies Gramick and Zerkowski, they see this as a sign that their work — long subject to criticism from much of the hierarchy — is being recognized and that the pope has their back, giving them forward momentum in their efforts to push for greater inclusion in the church.

"From the amount of phone calls, emails, texts and Facebook messages I've received already today, I would say that gay Catholics that are reaching out to me feel hope-filled," said Zerkowski. "They understand that the evolution of doctrine is a painfully slow process, but everyone one of them has expressed gratitude and tremendous hope that we are at least moving forward, that we're not stuck. That gives them hope."

"Progress takes time and this is a step in the right direction," said Gramick. "I am elated that Pope Francis is making this public statement. He's speaking from his heart. If we let our heart speak, then our minds will be changed. We have to lead from the heart and that's what he's doing."

A version of this story appeared in the Nov 13-26, 2020 print issue under the headline: Pope on civil unions? It's complicated.