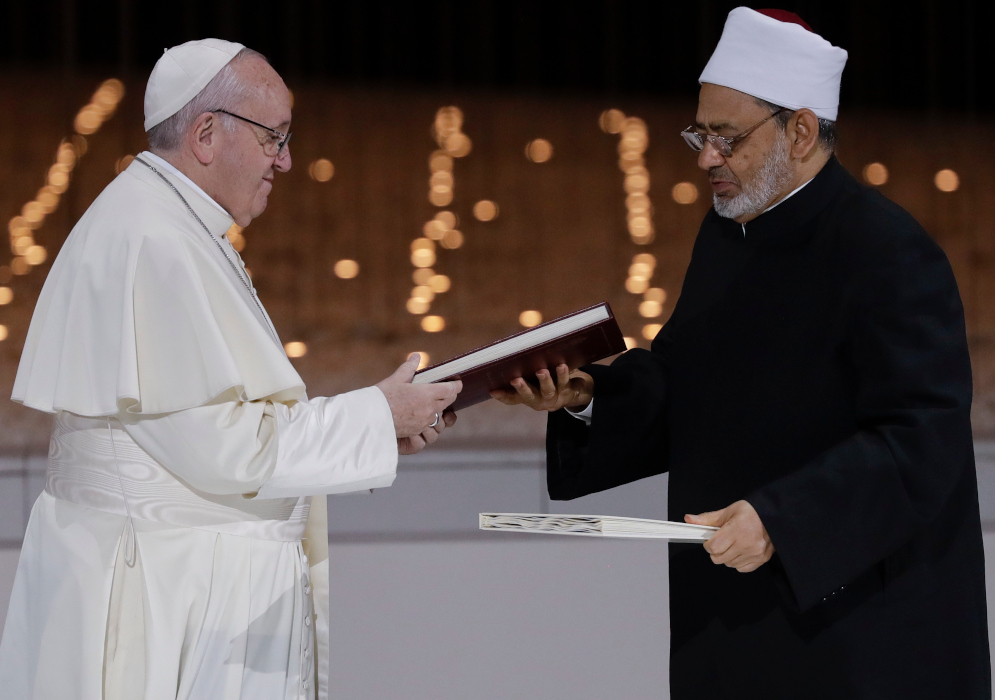 Pope Francis, left, and Sheikh Ahmed el-Tayeb, the grand imam of Egypt's Al-Azhar, exchange a joint statement on "human fraternity" after an interfaith meeting at the Founder's Memorial in Abu Dhabi, United Arab Emirates, Monday, Feb. 4, 2019. Pope Francis has asserted in the first-ever papal visit to the Arabian Peninsula that religious leaders have a duty to reject all war and commit themselves to dialogue. (AP/Andrew Medichini)

When John Lennon wrote his hit song "Imagine," eliminating religions and the divisions they entail was in his view a necessary condition for "living life in peace." A meeting of religious representatives in Rome this week made the case for shifting that paradigm.

Many peacemaking efforts have failed because they didn't consider the religious implications of their initiatives, according to Sam Brownback, the U.S. ambassador-at-large for religious freedom, who also attended.

"I think the world is crying for this movement," Brownback told Religion News Service in an interview on Thursday (Jan. 16), adding that even though the world might not want to talk about religion, the matter cannot be ignored.

"If we'd involved the religious actors 30 years ago in the Middle East peace negotiations and discussions, saying 'OK, this is what we are thinking about, what do you think? Help us build the peace,' we might be somewhere today," he said.

"We still don't have peace in the Middle East and the prospects don't look particularly good."

Brownback underlined that Christian, Muslim and Jewish faithful all source back to Abraham, creating a communality that can be built upon. "I just think the people who would divide have gotten out ahead of the people who would unite. We've got a lot of catching up to do," he said.

In its final statement Thursday, the AFI members vowed "to seek to serve those of other faiths and no faith" and condemned those who "use the name of God, or the teachings of Abraham, to incite bloodshed or to oppress others."

The AFI meeting, organized by the Multi-Faith Neighbors Network, built upon a legacy of documents that have promoted efforts by various religions to avoid bloodshed and model peace. These include the 2016 Marrakesh Declaration on the Rights of Minorities in Muslim Majority Countries, as well as the Washington Declaration and its successor the Charter for the New Alliance of Virtue, signed in 2019 by world religious leaders.

Participants at the event met with Pope Francis on Wednesday and in their final statement they quoted his Document on Human Fraternity for World Peace and Living Together, signed in February last year with the grand imam of Al-Azhar, Ahmed el-Tayeb, in the United Arab Emirates.

"As Pope Francis told us last night, our focus should be on how to build fraternity, meaning bonds of friendship," said Rabbi David Rosen, international director of interreligious affairs of the American Jewish Committee and director of AJC's Heilbrunn Institute for International Interreligious Understanding, speaking to RNS on Thursday.

Francis' message of fraternity, which Rosen described as "remarkable, especially coming from a Catholic religious leader," has garnered considerable pushback from conservative Catholic circles who view it as watering down religious beliefs for political gain.

But a focus on practical action, rather than dogma, is key to bringing about lasting results, according to Rosen. During the audience with the pope, religious leaders presented several joint courses of action, from creating a network of religious agencies to address immigration or combat poverty, to establishing a symbolic delegation to model respectful collaboration in conflict areas.

Far from being a contributing factor for conflict and violence, religions are essential to create an enduring and meaningful peace, Rosen said, adding that the Rome gathering "could potentially be historic" by bringing together the religious, political and diplomatic realms, which so far have seen "some mutual alienation."

"Speaking about Jerusalem, I think leaders have ignored the religious dimension, which is part of the problem," he said. "If you just deal with conflicts purely on a territorial basis, as real estate — even if the issue is real estate — it's not enough, because there are intangibles there that relate to people's historic attachment and spiritual identities.

"That's something politicians haven't understood yet, so maybe this is a way to open the door to that understanding," he added.

Hailing from the multicultural country of Indonesia, which has the largest Muslim population in the world, the prominent Muslim cleric Yahya Cholil Staquf knows a thing or two about building peace and harmony among religions.

"With all that is developing globally, we see all kinds of threats to the harmony of our society," he told RNS on Thursday, "so there is no choice for us to also engage globally."

Staquf is the secretary-general of the world's largest Islamic organization, Nahdlatul Ulama, which counts 90 million adherents even though as many as 110 million identify as members.

"Now the choice is for the people," he said. "Do we want our religion to stay part of the problem or do we want to activate the noble potentials within our traditions to be part of the solution?"