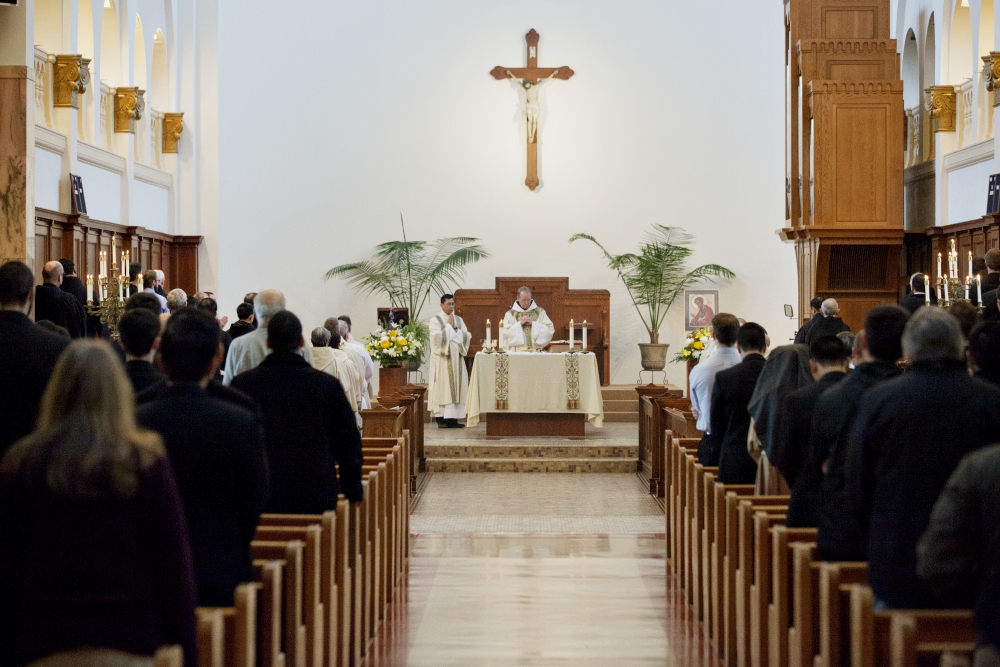 This is the fourth part of a series focusing on seminaries in the United States. Every priest, including those accused of sexual abuse or those who disagree with Pope Francis, attended seminary. How are priests being formed? Who is teaching them? How are seminaries adapting to the new wave of abuse crises and condemnation of clericalism from the papacy? NCR will attempt to answer these questions and more.

But where does clericalism start? How is it nurtured? Who or what is to blame?

While current Mount Angel seminarians do not have personal perspective on past generations' education and training, in a series of interviews with NCR, they adamantly contend the school is far from a petri dish for clericalism today.

Their faculty, formation directors and administrators say that is on purpose.

"The seminary environment itself does not engender a sense of clerical superiority, privilege or self-righteousness," said Dean Marshall, student body president and a transitional deacon for the Sacramento Diocese.

"Our formation environment is such that they outright discourage" clericalism, continued Marshall. "We're also involved in things that orient us towards service, towards serving others. And rather than encouraging us to look inward, they encourage us to look outward, towards our brothers, towards the community, and supporting each other, and really serving others in the service of Jesus Christ. ... I just don't see the seminary as being the impetus for developing clericalism, at least not here at Mount Angel."

Marshall admitted, "That does not mean a seminarian might not arrive with personal issues" that "engender those seeds." 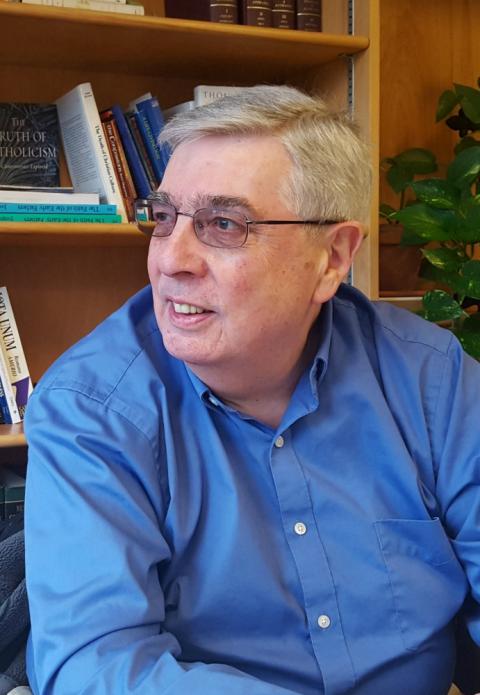 Deacon Owen Cummings, a faculty member for 22 years, concurs: "You can't control how a man develops his own interiority. It is possible for someone to say all the right things all the time and mask a growing clericalism in his own heart. There may be people like that, but I certainly don't notice it as a major issue here."

Seminarian comradery is obvious to a visitor. Does that "brotherhood" — developed as men share their lives in a seemingly self-contained environment while pursuing a common goal — act as an agent for clericalist wagon-circling?

"My experience is that seminary is precisely where I have seen the solution, in a sense, to the problem of clericalism," Dominic Sternhagen told NCR.

"I've seen here more than anywhere else how essential it is to understand the role of baptism in the church and how all of us are called through our priestly and prophetic mission to be equally part of this community of the baptized. So, for me, seminary precisely helps me to be freed from that clericalism mentality," said the Salt Lake City Diocese theology student.

Anthony Rosas, a pre-theology seminarian of the Diocese of Orange, California, said an understanding of priests "as above the laity and having a natural prerogative" for dictatorial authority "is manifestly not the case" at Mount Angel.

"There is a distinct humility" displayed by "the priests here and back home," he said, alluding to them as "men of humor and humanness … teaching us to be well-formed, and modeling it well."

"We are always on the lookout for trace elements of clerical attitudes," said Fr. Terrence Tompkins, Mount Angel vice rector, whose duties also include teaching religious studies and being a formation director for 16 second-year theology students. "I don't think it is something that is going to be acquired here. I don't see much of it, but we are on watch for it among many other things."

Francis has been a frequent critic of clericalism. In a "Letter of His Holiness Pope Francis to the People of God," issued Aug. 20, 2018, he wrote, "Clericalism, whether fostered by priests themselves or by lay persons, leads to an excision in the ecclesial body that supports and helps to perpetuate many of the evils that we are condemning today. To say 'no' to abuse is to say an emphatic 'no' to all forms of clericalism."

Speaking to a gathering of religious superiors in November 2013, Francis called it "one of the worst evils."

Asked about the anecdotal "little monster syndrome" in which newly ordained priests wreak havoc and run roughshod when taking a parish's reins, Las Vegas Bishop George Thomas said, "The onus for attaining high-quality seminarians is on the bishops."

"It is the responsibility of the bishops to do our pre-placement homework if we are going to have successful seminary training … and stay out of the numbers game," said Thomas, long familiar with Mount Angel in his former roles as the Seattle Archdiocese's vicar general and as bishop of Helena, Montana.

The bishop and others underlined that best-practices screening and vetting protocols for seminary candidates are in place. The battery of tests, background checks and interviews provide insight into candidates' development and maturity in areas including social skills, psychosexual maturity and personality tendencies.

Thomas, who served most of his priesthood in Washington and Montana, said Mount Angel reflects Northwest culture and does "an exceptional job of preparing men to serve in the Northwest and West."

"I particularly like the fact that their pastoral program is very sensitive to the poor and disenfranchised," he added.

Screening combined with a robust formation program that emphasizes collegiality, collaboration, self-awareness and bridge-building are an antidote to clericalism, said interviewees.

Assessment tools and a mandate to use them were little present when Cummings started teaching in seminaries 45 years ago, he said.

"In terms of human formation," Cummings said, "everybody knew in the past from faculty conversations and chitchat and gossip and so on who were the guys who had issues in terms of ordinary human development, but unless there was something really egregious, nobody did anything about it. It was sort of hoped it would get sorted out as the years went by, you know?" 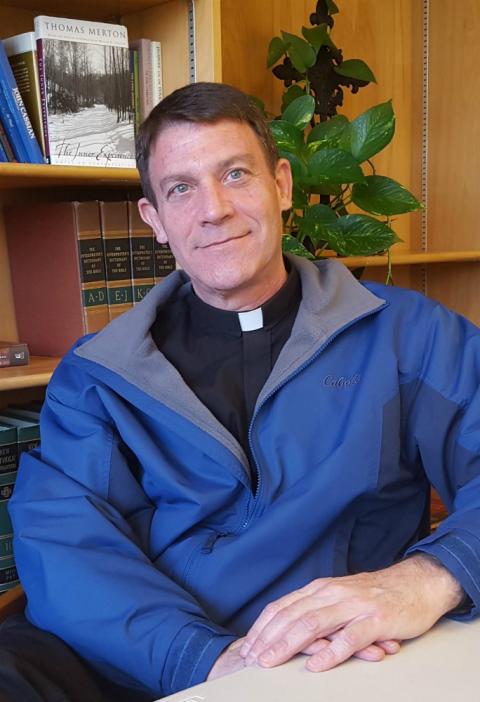 "There was kind of an inchoate awareness decades ago that these should all blend together," he explained. "But an active awareness of that is the case now."

If a clericalist bent does exist in a priest-candidate, chances are good it will surface in pastoral assignments, indicated Fr. Steve Clovis, who directed pastoral formation at Mount Angel for five years before moving to human formation for the current school year.

More than 70 options exist for off-campus seminarian pastoral assignments, said Clovis, and include ministry to the incarcerated, elderly, disenfranchised, mentally ill and hospitalized.

"We want to give our students an opportunity for deeper understanding of what Pope Francis is speaking about in terms of accompaniment," Clovis emphasized.

'We are not isolated'

Founded in 1889 by the Mount Angel Benedictine monastery, the seminary, along with the 55-member monastic community, retreat center and library, sits like a 46-acre cap on the top of a large hill owned by the Benedictines. As with many Benedictine abbeys that sit on a hill, the campus is frequently referred to as "the Hilltop."

Even if clericalism is set aside as a serious issue, doesn't the campus' apparent seclusion buffer seminarians from real life?

An isolated seminary life has been faulted by various detractors of priestly formation programs. On Jan. 23, a contingent of Boston College theologians and ministers called for a "serious reconsideration" of how priests are educated and trained.

Based on a two-year study, the declaration contends that an "enclosed setting of seminaries separates candidates for the priesthood from lay and religious men and women who are also preparing for church ministry."

Last March, the Association of U.S. Catholic Priests, a 1,200-member national organization, sent the U.S. bishops a 5,000-word critique of U.S. priest training and education, including a depiction of "the typical seminary community" as "significantly buffered, if not largely isolated from the larger world and the parish-level."

"The diocesan presbyterate and parish communities" provide "better community contexts for forming a candidate for servant priesthood," the association argued.

Such pronouncements can make Hilltop residents grimace. On one hand, they appear to agree that parishes and veteran clergy can be key sources of formation. They agree with engaging the ambient culture.

On the other hand, they counter that Mount Angel seminarians:

There are a handful of 18-year-olds, but the bulk of seminarians are ages 24-35. Several arrived with graduate or advanced degrees.

"Anyone who would pass any time here would know that we are not in any way isolated, and being 'on top of a hill' doesn't make it more isolated," said Driscoll, the school's chancellor.

"I would suggest it offers perspective. And we are in many ways more conveniently connected to the variety of settings that are important for a future priest to be exposed to than seminaries who are embedded in a suburb where it takes hours to get out, or seminaries in the heart of a city that provide little pastoral variety of the type to which our future priests need to be exposed."

Driscoll has experienced "a prejudice against monasticism," as well as "failure to see that real life and real people's existence take place in many kinds of settings, with advantages in every difference."

"In any case," he added, "there is also some value to the peace and quiet of the atmosphere in which the seminarians study and think and pray and prepare. In Catholic tradition of preparation for the priesthood, distance for reflection and developing a prayer life is not considered as distance from people. It is at the service of people."

"Our location and atmosphere" on a 46-acre campus in the picturesque Willamette Valley contribute to a student developing into "a reflective, thoughtful person, a person of prayer," Driscoll said.

"Mount Angel is considered a real center of ecclesial culture in this whole region," the abbot said, pointing out the campus is a frequent site for civic, cultural and church events.

Benedictine Br. Israel Sanchez says that "to say 'shut it down' " for seminaries like Mount Angel "does not pay attention to stories like mine and so many others."

Like others, Sanchez, a third-year theology student and monastery resident, appreciates "the environment here, the space and time created for me to discern my vocation. It is a place to encounter Christ and the church."

Driscoll, Thomas and seminarians also pointed out that "many of our future priests will be ministering in the settings that we are immediately surrounded by," in Driscoll's words.