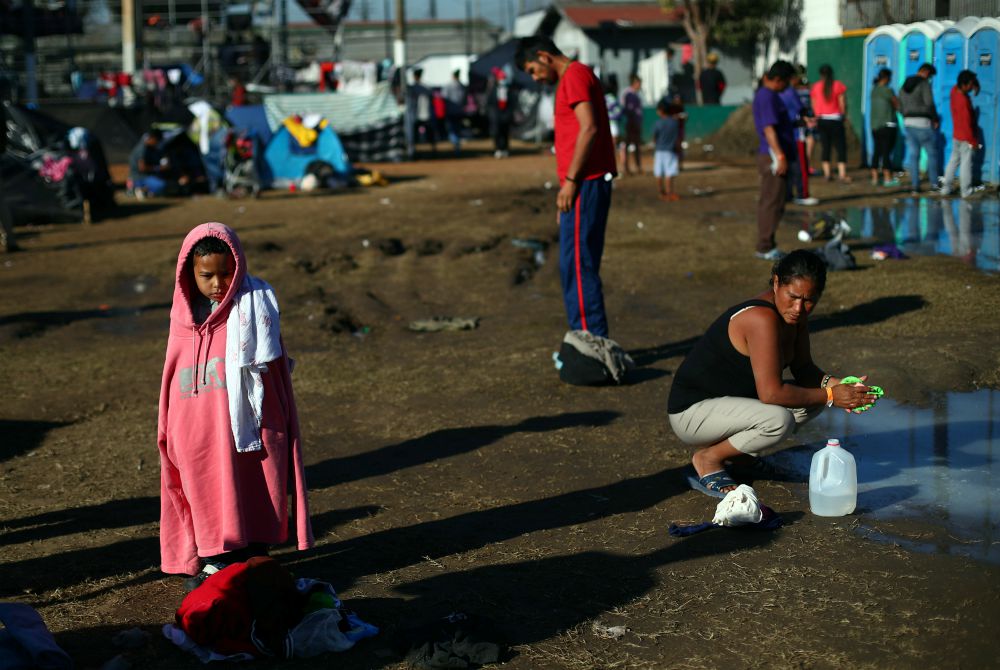 Part of a caravan of Central American migrants trying to reach the U.S. are seen in a temporary shelter Nov. 25 in Tijuana, Mexico. (CNS/Reuters/Hannah McKay)

From his office window, Camilo Perez-Bustillo can see immigrant children playing soccer in the courtyard.

Until recently, this image was unfamiliar on the grounds of the El Paso, Texas, Diocese, where the office of the Hope Border Institute, an organization that promotes justice and solidarity in the border region, is located. Perez-Bustillo serves as the institute's director of advocacy, leadership development and research.

But after Immigration and Customs Enforcement started releasing unusual numbers of migrants from detention without helping them make travel arrangements, local shelters were overflowing and "Bishop [Mark] Seitz decided that the diocese needed to step up," Perez-Bustillo said. An overflow shelter, administered by the Annunciation House network of migrant hospitality houses, is now located next to Hope Border.

The situation in El Paso is just one example of how Catholic groups are adjusting to meet the needs of asylum-seeking families from Central America who arrive fleeing violence in their home countries. But as faith-based groups on both sides of the border address humanitarian concerns, the U.S. and Mexican governments often react to the migrants in ways that make things more difficult for asylum seekers and threaten to overwhelm those who support them.

Farther west and on the other side of the border, legal advisors from the U.S. and Mexico struggle to spread reliable information, document human rights abuses and provide legal consultations for thousands of members of a migrant caravan and others waiting in Tijuana, Mexico, to be admitted to seek asylum at the San Ysidro port of entry in San Diego, California.

"I'm from this region, and I've never seen anything like this," said Luis Guerra, a strategic capacity officer for the Catholic Legal Immigration Network who has been traveling to Tijuana daily to help organize legal support. "It's just chaos. People are getting anxious and depressed and they're losing hope because, long story short, they're being denied access to seek asylum, essentially."

Guerra noted that the approximately 30 shelters in Tijuana are also overflowing, with many migrants housed in a makeshift shelter in a stadium where, after recent rains, those who didn't have tents likely "slept in mud last night." Shortly after Guerra spoke with NCR, conditions in the stadium became so bad that officials shut it down and moved migrants to a new shelter farther south.

Immigration experts say scenes of Catholic service providers scrambling to provide aid in chaotic situations are largely caused by the policies of the U.S. and Mexican governments, whose responses — or lack of responses — to arriving migrant caravans have overburdened charitable organizations and made it more difficult to access the right to asylum.

They're concerned immigrants will be further endangered and resources will be stretched even thinner if the U.S. and Mexico proceed with a reported agreement to require asylum seekers to remain in Mexico until their cases are complete, shifting more of the enforcement and humanitarian burden onto unprepared Mexican communities. But the crisis has also caused Catholic dioceses on both sides of the border to unite in support of migrants.

Several experts emphasized that U.S. policy decisions are a major cause of the current situation in Tijuana.

U.S. law says migrants must be allowed to seek asylum whether they present themselves at a port of entry or cross without permission between ports of entry. But policies like "zero tolerance" — which resulted in the family separation crisis — and a Nov. 9 presidential proclamation barring migrants from seeking asylum if they cross between ports have sought to funnel migrants to ports of entry. (A federal court has prevented the bar from being enforced until at least Dec. 19.)

Yet the U.S. hasn't made things easier for asylum seekers who attempt to enter through ports. Using a practice called "metering," officials at ports admit a limited number of migrants each day and tell others they must wait to enter and apply for asylum, sometimes for days, weeks or months.

While the U.S. cites capacity issues to justify metering, "under any reasonable scrutiny that justification rings hollow," said Angelo Guisado, a Center for Constitutional Rights staff attorney working on the East Bay Sanctuary Covenant v. Trump case, which challenges the Nov. 9 proclamation. "The U.S. can and still does release people on supervised release or ankle bracelets," so capacity to detain them isn't necessary.

President Donald Trump has made it clear that he doesn't want caravan members to enter the U.S. in any way and has demanded that countries they pass through halt the group. Although this didn't stop thousands of migrants from reaching the U.S. border, many did turn back or decide to apply for asylum in Mexico instead of continuing to the U.S. 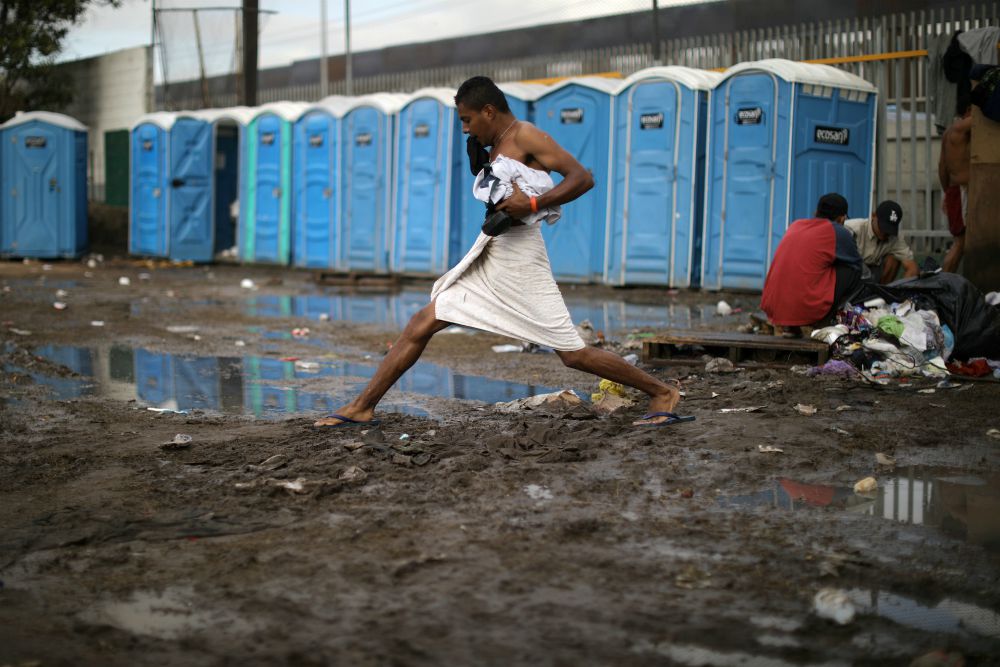 A migrant who is part of a caravan of thousands from Central America trying to reach the United States steps across mud after taking a shower Nov. 28 at a temporary camp in Tijuana, Mexico. (CNS/Reuters/Lucy Nicholson)

Since partway through President Barack Obama's second term, Mexico has accepted much of the enforcement burden for immigrants heading north, exceeding the U.S. in the number of Central Americans it "deterred, detained [and] deported" said Perez-Bustillo. Now, by encouraging asylum applications, Mexico is serving the Trump administration's interests by taking more responsibility for the "humanitarian dimension" as well.

It's not clear that Mexico is equipped to adequately care for migrants' needs, several advocates said. According to Perez-Bustillo, the asylum system in Mexico has little capacity to process applications compared to the U.S. and "has not been handling asylum effectively in a way that respects people's rights." Mexico also struggles to protect even its own citizens, he pointed out; thousands of Mexicans seek asylum in the U.S. each year.

Several people familiar with the border area also believe it's unsafe for migrants who could eventually be admitted to the U.S. to be forced to wait in Mexico.

They were especially concerned by a Nov. 24 Washington Post report that the U.S. was discussing an agreement with the incoming Mexican government, which came into power Dec. 1, to make asylum seekers remain in Mexico for the duration of their asylum cases, which can take months or years to process.

"I'll be honest with you; border towns in Mexico are still extremely dangerous. Migrants are routinely preyed upon, assaulted, beaten, raped, abducted, all the horrible things you can imagine, and so I would loathe to see such an agreement put in place, and I also think that it violates federal and international law," said Guisado.

"The United States has an immediate duty to process an individual, giving them access to the asylum process, and that's whether they present at a port of entry or whether they're apprehended after crossing in between ports of entry."
—Angelo Guisado

His organization's position is "that the United States has an immediate duty to process an individual, giving them access to the asylum process, and that's whether they present at a port of entry or whether they're apprehended after crossing in between ports of entry," Guisado said.

"Many people are in extreme danger currently in Mexico," said Guerra. "If your persecutor was finding you in Central America or anywhere else, they know that you're stuck in Tijuana somewhere. There's major security issues and people will just be sitting ducks, unprotected, and I can't even imagine the consequences of something like that."

'Refugee camp' with no resources

Aside from the danger of violence, having to wait in Mexico without adequate means of support might be untenable for some migrants, effectively denying them the possibility of seeking asylum in the United States.

The group of migrants staying in a Tijuana stadium was similar to "a refugee camp in the middle of a major urban area," Perez-Bustillo said, except without the funding, resources and infrastructure of an official U.N.-administered camp. "It's produced really negative consequences for people who have to live under these conditions." 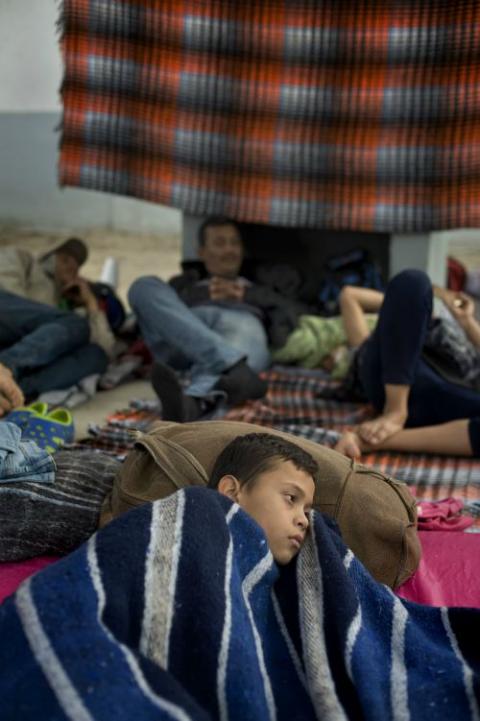 A boy rests at a shelter at a sports facility in Tijuana, Mexico, set up to for people arriving Nov. 15 in a caravan of Central American migrants at the U.S.-Mexico border. The shelter opened the previous night and had more than 750 people, but dozens more lined up outside waiting to enter. (CNS/David Maung)

"What I see is the majority of the migrants that are in Tijuana right now will voluntarily self-deport when they realize there's not the slightest way to peacefully cross to the United States," said Adrian Castro, who accompanied the caravan from the Mexico-Guatemala border to Mexicali, Baja California, on Mexico's northern border to provide medical care as part of a mission with the Misioneros de Cristo Resucitado religious order.

Conditions for migrants are difficult because negative social media and television coverage have turned parts of civil society against them, said Castro. Much of the population has "abandoned them to the shelters financed by the Catholic Church and some other churches, because the government isn't helping at all."

While communities of faith are willing to help, taking the majority of responsibility for assisting migrants is "doing the job that governments are not interested in doing or are incapable of doing, and I think that's a deeper problem," Perez-Bustillo said.

U.S. Catholics are also taking responsibility for migrants' care as various border towns see more being released from detention in what some theorize is an effort to clear space for the caravan. Their work has become more difficult, and it's hard to move migrants to their next step as quickly, because officials have stopped providing migrants opportunities to contact family and plan travel before being released, Perez-Bustillo explained.

Global Sisters Report has been compiling stories from Catholic sisters who are supporting asylum seekers in places like El Paso and McAllen, Texas. In San Diego, Appaswamy "Vino" Pajanor, executive director of Catholic Charities for the diocese, said officials have dropped off approximately 50 to 70 migrants per day at bus stops or shelters since late October without giving them the normal I-94 document that grants permission to work.

His organization is part of a local coalition helping migrants with health care, temporary shelter, case management and transportation, sometimes housing as many as 300 migrants when their previous capacity was 150.

He's in communication with groups that are working across the border and says that people in San Diego are also offering aid to migrants in Mexico. While he doesn't have firsthand knowledge of the situation in Tijuana, Pajanor has been hearing reports that "the resources are nowhere near to the need there; they are very strained."

"That's what we are fearing, is that if the system breaks in Tijuana or in Mexicali then we'll be having a crisis across the border. And I believe the crisis is already starting to happen there."

A version of this story appeared in the Dec 28, 2018-Jan 10, 2019 print issue under the headline: Cross-border crisis underway.