Carrying out 100-percent policy splits up families, including asylum seekers

by Maria Benevento
Justice
This article appears in the Families Separated at the Border feature series. View the full series. 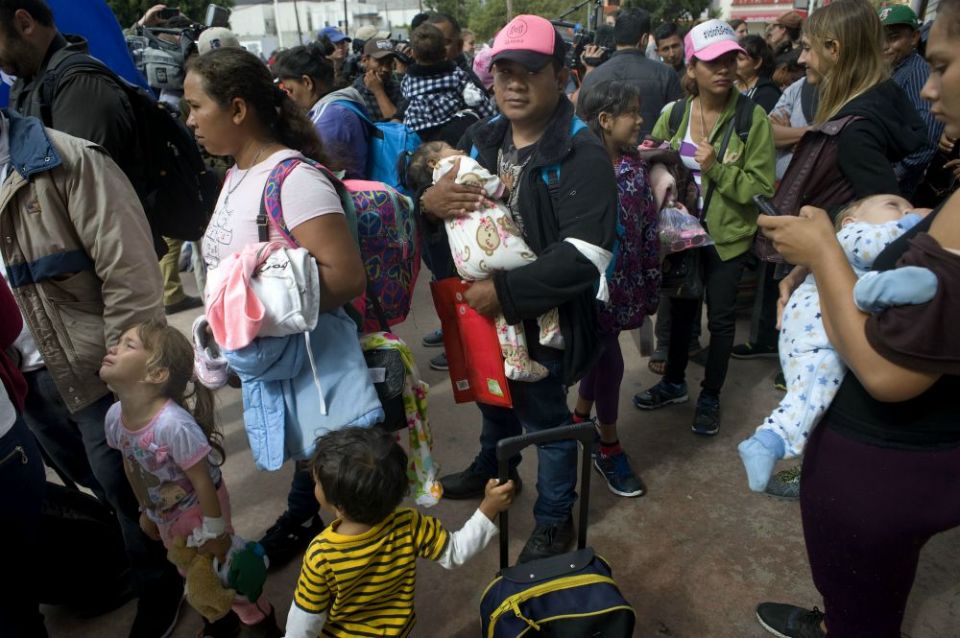 Calling a new policy that will lead to the separation of more families at the border cruel and unjust, Catholic advocates and asylum experts condemned a plan they say will cause immigrants added pain and trauma without deterring them from seeking refuge in the United States or addressing the root causes of migration.

"When you dehumanize immigrants rhetorically as this president has done, it makes it easier to rationalize a cruel policy such as family separation," said Kevin Appleby, senior director of international migration policy at the Center for Migration Studies. "It creates an atmosphere where people lose their moral bearings because they start to believe the rhetoric that these people are less than human and do not have rights."

Attorney General Jeff Sessions announced May 7 that the Department of Homeland Security will refer 100 percent of illegal border crossing cases to the Department of Justice, which will begin prosecuting 100 percent of those cases. Asylum seekers are not excepted from the policy, although it doesn't apply if they turn themselves in at ports of entry.

The policy isn't being presented as a family separation effort but will necessarily split up more families. Children cannot accompany parents to criminal jails while the parents wait to be prosecuted or serve a sentence of up to six months for the misdemeanor of illegal entry.

So far this fiscal year, nearly 36 percent of migrants apprehended at the southern border were unaccompanied minors or family units, and the vast majority of those children and families came from the violent "Northern Triangle" countries of El Salvador, Guatemala and Honduras.

"Government officials are responsible for the foreseeable results of the actions they take and what flows from that," said Camilo Perez-Bustillo, director of advocacy, leadership development and research at the Hope Border Institute in El Paso.

The new policy was piloted in the El Paso sector July to November 2017 before it was applied to the whole nation; during that time period, apprehensions of family units actually increased, although not as dramatically as in other sectors during the same time period, even though overall apprehensions were down.

Officials have recognized that increased family separation will result from the policy. Assisting anyone, even one's own minor child, to enter the U.S. illegally, is considered smuggling.

"If you're smuggling a child, then we're going to prosecute you, and that child will be separated from you, probably, as required by law," Sessions said in his announcement. "If you don't want your child separated, then don't bring them across the border illegally. It's not our fault that somebody does that."

Some Catholics pushed back against officials' claims that they are only following the law; in the past, people seeking asylum usually had those cases processed before officials decided if prosecution was necessary.

"I can't imagine where this idea of following the law, which is supposed to be a matter of justice, can take precedence over the injustice of essentially putting children in a jail of their own where they have no access to the parents who love them enough to risk their lives to come all the way to the United States," said Natalia Imperatori-Lee, a professor of religious studies at Manhattan College.

Legally, immigrants are allowed to seek asylum whether they come to a port of entry at the border or cross between ports and end up in Border Patrol custody, multiple advocates pointed out. And while crossing between ports of entry is technically illegal even for asylum seekers, that doesn't mean the law requires 100-percent prosecution, said Ashley Feasley, director of policy at the U.S. bishops' conference Migration and Refugee Services Office.

Feasley pointed out that even aside from humanitarian and child welfare concerns, the government is spending an estimated $620 per night detaining the average separated family rather than using its discretion to divert those resources to combatting real threats.

When families are separated, children are taken under the care of the Department of Health and Human Services Office of Refugee Resettlement while the parents are placed in the custody of the U.S. Marshals. 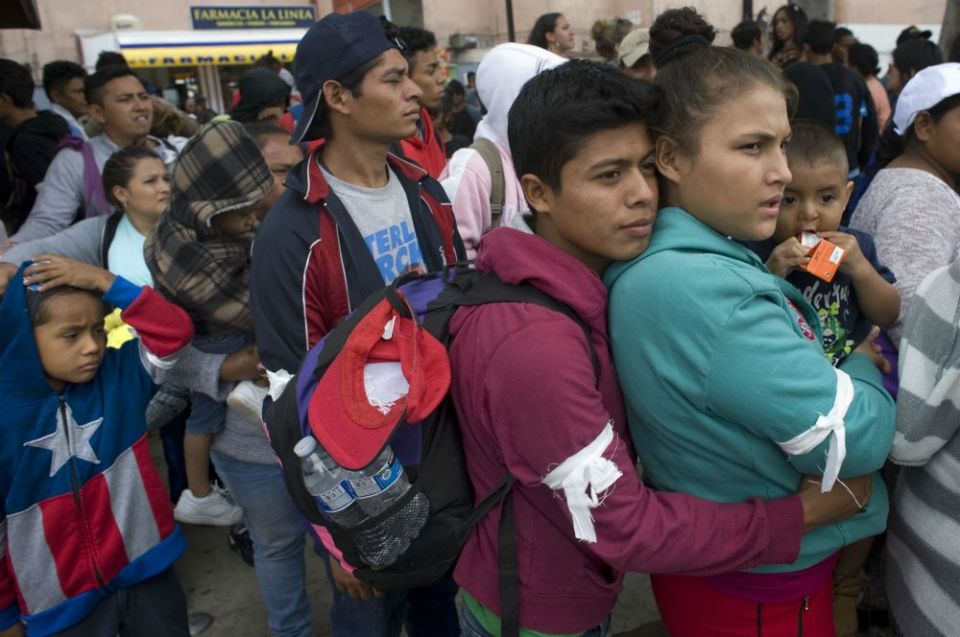 As documented in a Joint Complaint on Forcible Separation of Families in Customs and Border Protection Custody from several immigrant rights organizations, during this separation it can be very difficult for parents to learn where their children are and even more difficult to communicate with them. This can complicate court cases when some family members have documents or information that others need, said Feasley.

While the families can be reunited after the parents are released, there's no government mechanism to ensure that this happens, Feasley added, leaving the burden of navigating multiple agencies to social services providers, attorneys and extended family. In some cases, parents are even deported before being reunited with their children.

Increasing advocates' concerns is the worry that HHS isn't keeping children safe. In late April, shortly after a New York Times article documented around 700 cases of family separation since October 2017, HHS admitted it had lost track of nearly 1,500 unaccompanied minors who were placed in foster care; several of those minors were discovered being trafficked.

The fact that the administration implemented a policy that will increase family separation right after those pieces of information became public is "really disturbing" said Perez-Bustillo.

"There's no reason to assume that we know what happens when children are separated in this way. What does it mean if you're one of those children that they have 'lost track of?' " he asked. "What does that do to your emotional and psychological health and development? What are the lingering effects of this? How do you ever undo that damage? And then let's multiply it as the policy is intensified."

Gerald Gray, a clinical social worker who serves as a consultant for the Hope Border Institute and has decades of experience working with refugee survivors of torture, described this form of indefinite and uncertain separation as a form of "forced disappearance" which he also called torture.

"It's an induced pain, it's not for the benefit of the person who's disappeared or their caretakers, and it's not wanted," said Gray. "It's not as if this is a medical procedure. It's an attempt to terrify, usually whole communities, certainly families, and put them in great pain, sometimes unending pain. I can't say more about its nature as torture."

Forced disappearance, like others forms of torture, often results in depression and post-traumatic stress disorder — manifesting in children through symptoms such as developmental regression, difficulty maintaining interpersonal relationships, and emotional issues such as aggression and suicide, Gray said.

Although parents might also be traumatized by the separation, effects are especially severe for children, particularly if that trauma is compounded by past traumatic experiences, said Gray. "We know in clinical work with torture that those sorts of collection of traumas last for years if obtained during childhood."

Against the common good

Because, in Catholic teaching, families are the "basic cells of civil society" added Boston College theology professor Kristin Heyer, "policies that separate families at the point of detention not only traumatize minors and parents themselves, in violation of their human dignity, they also threaten the common good."

Christianity calls people to recognize others' human dignity and face migrants' real struggles, Imperatori-Lee added. "The church should be not just a place of comfort but a place where we confront our discomfort. We sit there in the pews and stare at a crucified body. The least we could do is turn our attention to the people who are being crucified in our midst today."

Imperatori-Lee and others expressed concern that the government was taking the opposite approach, trying to deter asylum seekers instead of recognizing that they flee from genuine threats.

"The deterrent factor is once again in complete violation of Catholic social teaching which holds that people have a right to migrate," said Imperatori-Lee, "… They're leaving genuinely violent, dangerous, life-threatening circumstances. So to deter that is essentially to condemn people to death."

The desperation migrants experience may mean that the policy is not even effective as a deterrent, Appleby pointed out. "The forces that are driving families to come to the U.S. are much stronger than any deterrence policies that the admin could employ. When you're facing death … you're going to take your chances."

"One thing we know, is that when conditions are bad enough, nothing will stand in the way of people fleeing and seeking safety, especially for members of their family," said Perez-Bustillo. "… It's like the incentives don't work in that context."

A more effective and more humane tactic would be to focus on addressing root causes, many of which can be traced to U.S. policies such as the war on drugs, free trade, supporting corrupt governments and being the source of guns and gangs, advocates said.

"Until we address the root causes in these countries, in the Northern Triangle, the violence, the economic depravity and the political corruption in these countries, you're not going to solve the problem," said Appleby. "The problem is that Washington doesn't have the patience for that. Politicians want an immediate fix."

"This could be the opportunity for those deeper questions to be asked, and for issues to be reframed, and for the focus to be on what are the causes that produce these flows and how U.S. policy contributes," Perez-Bustillo concluded. "Hopefully we can take that path. But the administration seems committed to a very different path, which means intensifying the current pattern of serious human rights violations."

A version of this story appeared in the June 15-28, 2018 print issue under the headline: Catholic advocates denounce US plan for prosecution .