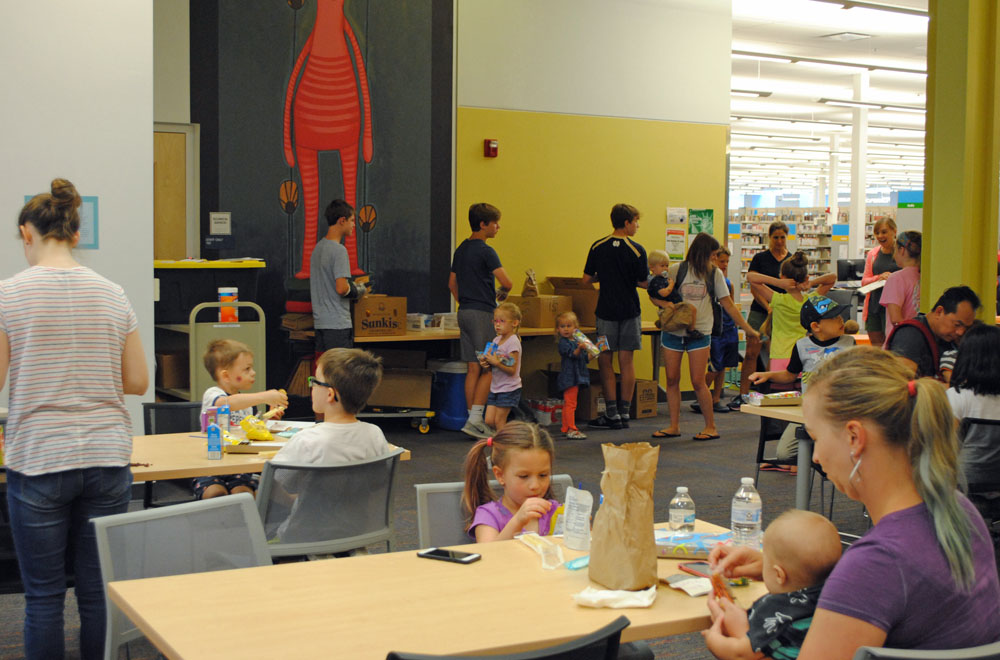 "I like it. The food's good. It's free. It's at the library and I like the library," shared Greta, a child receiving lunch from Catholic Charities of Northeast Kansas, which sponsors a summer meals program at the Johnson County Central Resource Library in Overland Park, Kansas.

Her mother, Wendy Gick, explained that the meals, available to Greta and her two siblings five days a week, help relieve a financial burden.

For much of the year, millions of children depend on free or reduced price school meals. When school lets out in the summer months, that source of affordable and nutritious food disappears.

But the children's need doesn't disappear. A study conducted by the No Kid Hungry campaign, Deloitte Consulting and the Arby's Foundation, found that nearly a third of low-income families reported not having enough food during the summer. Families spent an average of $316 per month more on food, and many had to choose between paying for food or utilities (69 percent) or food and medical care (66 percent).

The U.S. government has a solution to this issue. A summer meals program funded through the Richard B. Russell National School Lunch Act reimburses sites for every qualifying meal they serve to someone 18 or under during the summer. Funding is unlimited, there are no apparent threats to the program's continuance and sites located in low-income neighborhoods can serve any child who shows up, no questions asked.

The only catch is that the federal government doesn't automatically create sites where they are needed. It depends on state and local agencies, schools and private charities to actually establish, run and publicize meal sites.

According to No Kid Hungry, only 12 percent of children's summer food needs are met. Catholic groups are among the many organizations that are working to fill gaps in awareness and availability that prevent children from getting fed.

While state agencies, such as Departments of Education, administer the programs, intermediate groups such as non-profits, school districts, or parks and recreation departments often serve as program sponsors, providing food and taking charge of paperwork for a variety of locations that actually host meals.

Nutritional Development Services of the Philadelphia Archdiocese has been sponsoring summer meals for around 45 years.

Last year, they provided about 725,000 meals at nearly 400 sites, including YMCAs, church camps, police stations and hospitals "as well as just neighborhoods and individual volunteers graciously willing to pop up a table tent and chairs and see the need in their community to feed the children who may not have a nutritious meal otherwise," said Brooke Mullen, assistant director of community relations.

As part of a group of sponsoring organizations that provide a total of around 3 million meals, they still meet less than half of the need in Philadelphia and are constantly trying to reach more children, Mullen said.

Many agencies that provide summer meals are working to increase awareness and calling on Congress to make changes to the program that could help feed children, especially in rural areas, who aren't well-served by the current model.

Although there are exceptions in some rural areas, several experts agreed that lack of sites willing to serve meals isn't the main difficulty.

"It's less about not having the food there for kids but more just making sure the kids are there for the food," said Kathy Saile, California director of No Kid Hungry.

In the short term, the quickest way of increasing access is to promote awareness and ensure that people who do live near meal sites know exactly where and when to get food, said Derrick Lambert, senior manager of the Center for Best Practices for No Kid Hungry.

In 2013, No Kid Hungry established a hotline that allows anyone to text "food" or "comida," to 877-877, enter an address or zip code, and receive the location and serving times of the nearest meal sites.

After families become aware of meal programs, difficulties can still remain. One concern is making immigrant families feel comfortable accessing programs, Saile said. Church participation can help immigrants and others feel safe, as can the fact that the families don't have to submit personal information.

"Programs are most successful when they are operated by and promoted by organizations that families know and trust," Lambert said. "That can apply to a lot of organizations. Definitely faith communities fall into that category."

Access can also be complicated by something called the "congregate meal requirement," which says children must eat meals at the site that serves them.

"In many places that works really well," Lambert said. "If there's already an activity in place or there's learning opportunities or a chance for socialization, that may not be as much of a challenge and it may even have some significant benefits to have a child remain on site."

At the Overland Park library, volunteers, many of whom are children or young teens themselves, facilitate activities such as origami, limbo, face-painting or making paper airplanes, said Catholic Charities summer volunteer Barbara Kirby. Although the federal program doesn't cover meals for adults, Catholic parishes have stepped in to provide food so parents can eat with their children. 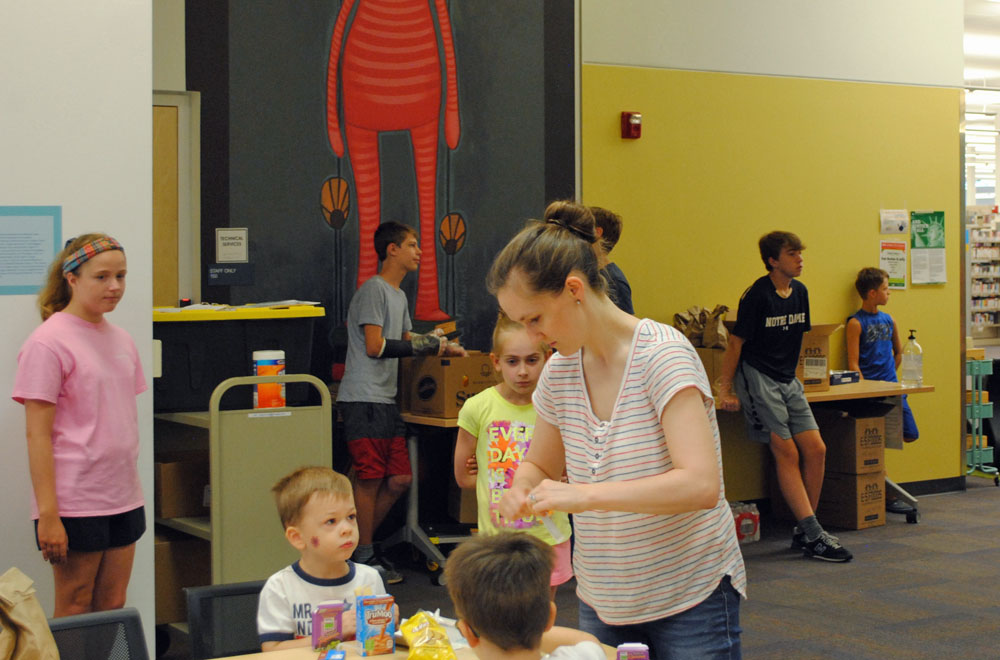 Multiple parents at the program mentioned they first learned it existed while already at the library for other activities, and they appreciated the whole experience.

"It's convenient, it's healthy, it's something different than we might have at home," said Adriane Ammerman, who attended with her three children, ages 5, 3 and 3 months. "And it just kind of provides a chance for fellowship and opportunity to meet other families."

But for others, the congregate requirement only complicates meal delivery.

"We do know in rural communities where you don't really have the economy of scale to serve a large number of children, those programs may not be financially sustainable" or may not work logistically for families, Lambert said.

Denise Ogilvie, vice president of outreach and grants management at Catholic Charities of Northeast Kansas, sees these challenges firsthand. Although some of the 32 sites her organization sponsors are in the Kansas City metro area, 18 of the 21 counties they serve are rural.

The meals program website cites Department of Agriculture data that says only 7 percent of Kansan children's need for summer meals is met. When the Catholic Charities program began in 2015, Kansas ranked 49th out of all the states in feeding children over the summer. It has now risen to 45th, Ogilvie said.

She recently testified in front of the House Committee on Education and the Workforce to share challenges of working in a rural area, and suggest possible solutions such as giving children meals for the whole week when they come into town for church on Sundays.

Other possibilities include allowing sites to deliver meals or let families pick them up, Lambert suggested. He also praised electronic benefits transfer — giving families extra nutrition assistance in the summer — which in a pilot program was shown to reduce children's food insecurity.

Whether dealing with urban or rural challenges, Catholic organizations are committed to increasing access to summer meals.

"Hunger doesn't take a break for children during the summer when school's out of session," Mullen said, "So we continue to work on a daily basis to reach as many children as possible."