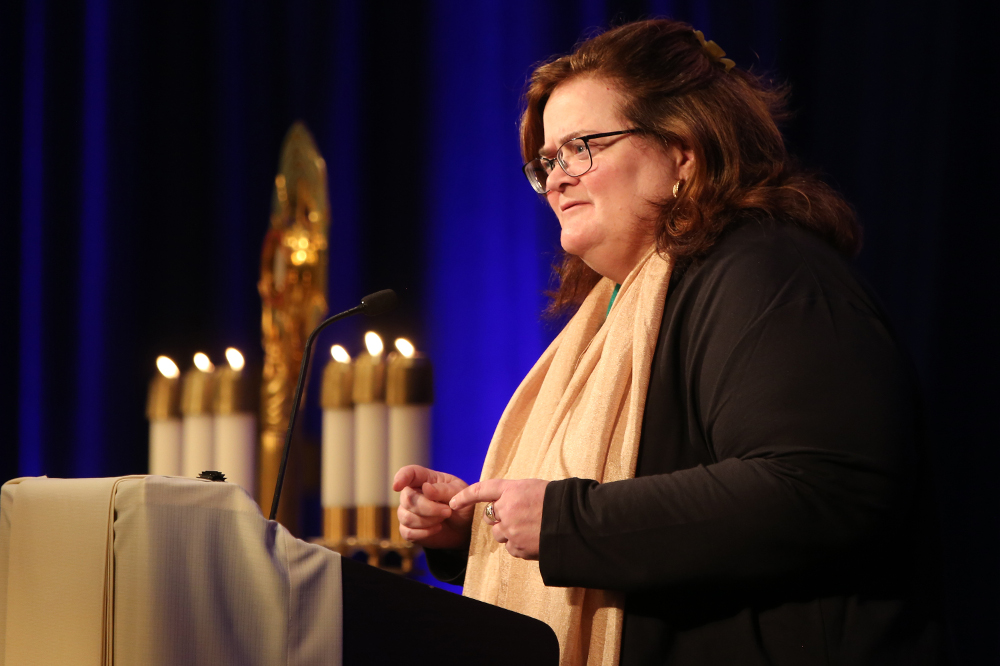 Teresa Pitt Green, an abuse survivor, speaks to bishops in the chapel during a day of prayer Nov. 12 at the fall general assembly of the U.S. Conference of Catholic Bishops in Baltimore. (CNS/Bob Roller)

The two survivors who addressed the annual meeting of the U.S. bishops both expressed "deep disappointment" about the delay of voting on proposals to address clergy sex abuse.

"I love Pope Francis, but he breaks my heart," Teresa Pitt Green, who was abused by a series of priests during her youth and teen years, told NCR.

Green and Luis A. Torres, Jr. addressed the U.S. bishops during the "day of prayer" Nov. 12 at their annual meeting in Baltimore.

"Things move so slowly. It's painful," Torres told NCR, adding that every day of delay "is a struggle."

During his presentation to the bishops, Torres had urged them: "You need to fix this now."

Just hours before the survivors' presentations, U.S. bishops' conference president Daniel DiNardo announced that the planned votes would be delayed, per a Vatican request, on a new code of conduct for bishops and creation of a "special commission" to review complaints made against bishops.

Green said that while those proposals were "not perfect," she had been hopeful that, if passed, they would constitute a step forward.

"These bishops are clearly ready to take big steps further," she said, "and now they have to wait."

Torres and Green said the bishops responded effusively to their presentations, which both contained strong admonishments about the effect of some of the prelates' actions.

"The Lord has cried more tears on his cross because of the decisions some of you have made," she said, adding, "I will continue to pray for you."

Torres said bishops' words and actions have caused "further harm" and led to a feeling of "ongoing betrayal" by victims, their families and the larger church community.

Torres and Green are both cofounders and directors of Spirit Fire, an organization dedicated to "Christ-centered restorative justice" for adults, families and parishes wounded by child abuse and trauma.

Torres, an attorney who has served on the Brooklyn Review Board, compared abuse of a child to murder. "When a child is abused by someone they trust … you have mortally wounded the soul and spirit of that child," he said in his presentation. "That is particularly true when the abuser is a priest."

He pointed out that survivors are not the bishops' adversaries. "We are your children," he said. "We bear the shame of a crime to which our only contributions were trust, faith and innocence," he said.

To Torres, the delay "feels like politics overriding faith," he told NCR. "And we can't have that anymore. The line between good and evil, between right and wrong, is very clear.  When we push politics, we lose track of that."