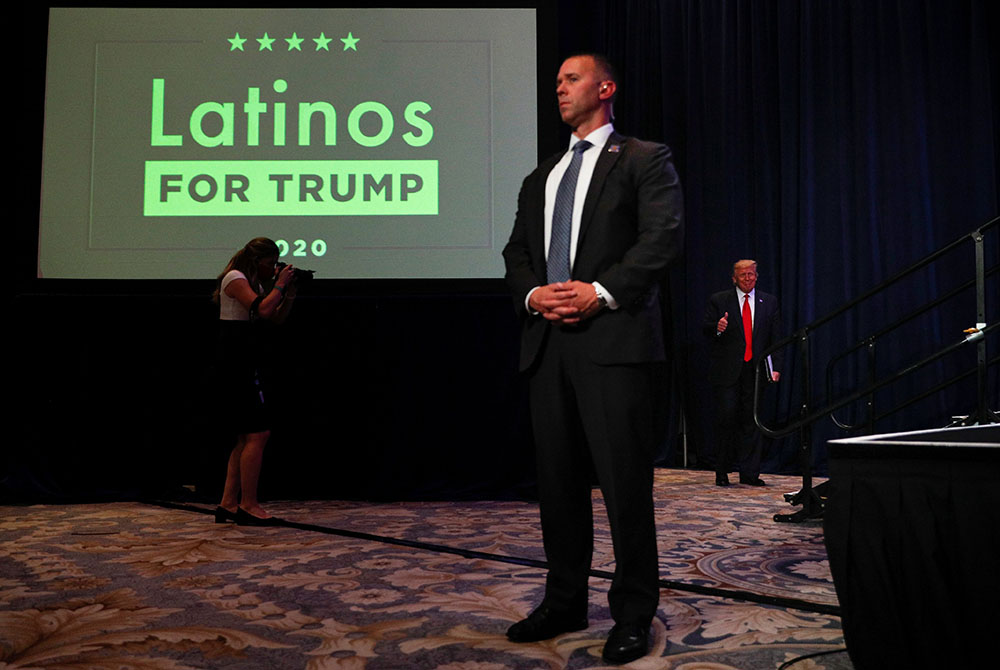 Each presidential election year, the nonprofit Hope Border Institute in El Paso, Texas, has counted on parish halls and other church spaces to register new voters, particularly Latinos, so that their voices and interests can be properly represented.

But this time around, the coronavirus pandemic has dampened the organization's efforts in that mission, even as Texas finds itself a swing state in one of the most heated presidential elections in recent history. The nonprofit Center for Election Innovation and Research said new voter registration was down 24% in the first seven months of the year in the Lone Star state, compared with the same period in 2016.

"We've been challenged by the pandemic because we don't have the same access to the community," said Dylan Corbett, the institute's executive director in a Sept. 28 interview with Catholic News Service.

And yet the voice of Latinos, he believes, is more important than in years past.

"It's a population that's been directly impacted by everything that's happening right now, from poverty in the community, food insecurity, health care ... the coronavirus has really deepened existing inequalities and you really see that in border communities," Corbett said. 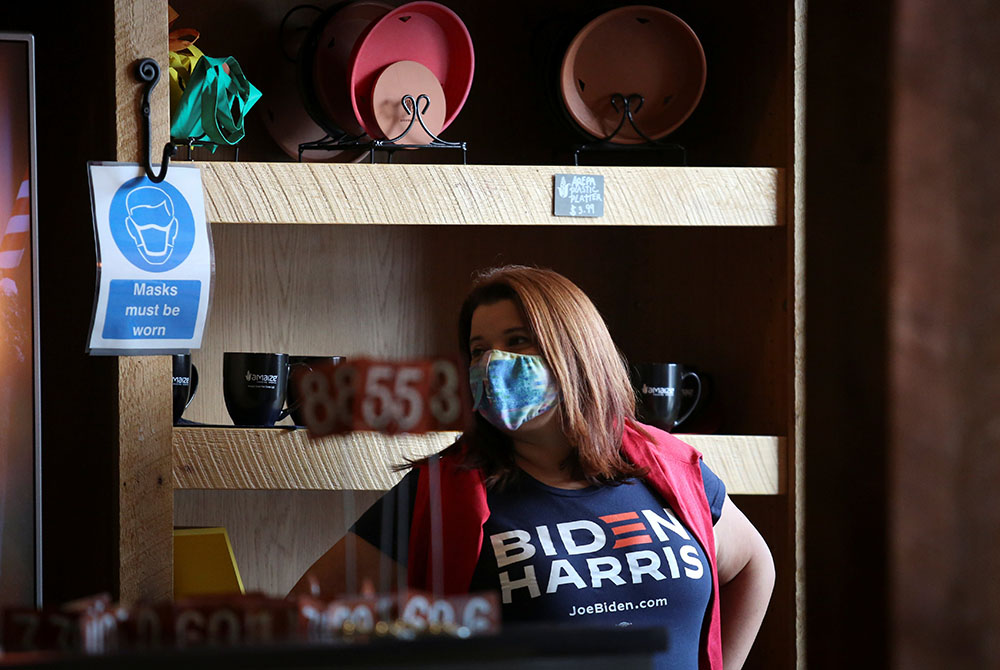 A woman in a Miami restaurant listens to Democratic vice presidential candidate Sen. Kamala Harris during a campaign event Sept. 10. Miami is a majority Latino city, with Hispanics making up 70% of its population of about 471,000. (CNS/Marco Bello, Reuters)

It's exactly those issues that the Pew Research Center said Sept. 11 were at the top of the list in a poll of eligible Latino voters: the economy, health care and COVID-19.

Pundits and others often dismiss what some call "the Latino vote," saying it doesn't exist because Latinos don't vote uniformly and have members with a wide range of views. But both presidential candidates find themselves courting specific Latino constituencies in battleground states rich in electoral votes such as Arizona, Florida, Nevada, North Carolina, Pennsylvania and Texas.

In Florida, Donald Trump is targeting older Cuban American voters who backed him in 2016 and seem ready to do so again. In Texas, Joe Biden has wooed Latinos, many of them Mexican Americans and that effort seems to be paying off as he leads Trump with 66% of the Latino vote against Trump's 25%.

Though neither effort on its own would carry either candidate to victory, in a tight race, a matter of a few percentage points from Latino voters, whose numbers continue to increase in the electorate, could make the difference between winning or losing.

In states such as Nevada, once a GOP stronghold, the Latino vote in 2016 managed to turn a once red state from purple to blue in the last presidential race when Hillary Clinton carried the state and much credit went to union organizing efforts to turn out the Latino vote there.

Even so, the high-profile blog FiveThirtyEight, which focuses on politics, among other topics, declared in a Sept. 22 headline: "There's No Such Thing As The 'Latino Vote.' "

Related: It's time to bury the idea that demography is destiny, once and for all

At the 17th annual Immigration Law and Policy Conference in late September, panelist Eduardo Porter, an economics reporter for The New York Times, said that technically, outside of the U.S., "Hispanics don't exist," because they are defined by the country they come from. So, he said, they're Mexicans, Salvadorans or Venezuelans, and each has a distinct way of looking at the world that affects how they or their descendants vote once they enter the U.S. electorate.

"You can't create a strategy to go after all these different individual groups," Porter said. "To go after it politically ... you're bound to run into all sorts of trouble because they are definitely not a group, there is no cohesive there there."

But to organizations such as the Hope Border Institute, what's important is to get Latinos eligible to vote to do so, said Corbett, particularly so they're not disenfranchised in communities such as El Paso, where they are the majority.

"Our older voters here in El Paso definitely realize that they're standing on the shoulders of giants who have blazed trails making sure that Latinos have a seat at the table," Corbett told CNS. "That was a fight older Latinos were engaged in."

The challenge today, he said, is to get young Latinos engaged in that battle. To do that, and given the physical restrictions brought about by the pandemic, the Hope Border Institute has joined other organizations in registering Latino voters at food distribution centers hosted by the area's Catholic parishes and churches.

This year, the organization is continuing its "Aquí estamos" ("We are here") effort to register Latinos and to get those who already are registered "to work with them to identify issues important to them," so they can confidently walk to the ballot box with information, but also to get religious voters to reflect on "how faith connects to working for a more just society," Corbett said. 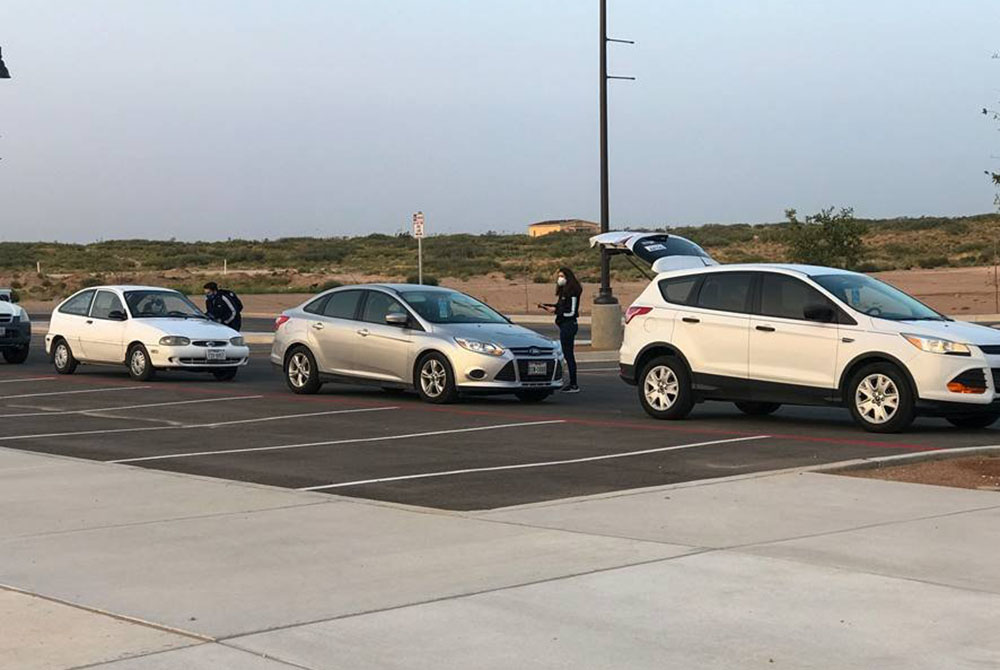 Younger Latino Catholic voters, he said, have responded to Pope Francis' message, particularly as they see the inequalities that go back generations and that still are not resolved and include his teaching on the environment, the sanctity of life, inequality and exclusion.

"Young people see how issues of racism and issues of exploitation are related to the economy and how they push people to the margins," he added.

Though once overlooked, candidates now are paying attention to the intricacies of the second-largest ethnic group that makes up the Catholic Church in the U.S., particularly as they seek a path to victory built on coalitions.

On the Sept. 8 feast of Our Lady of Charity of El Cobre, the Biden and the Trump campaigns sent greetings via Twitter to those celebrating "la cachita," an affectionate nickname for Cuba's patron saint, who was celebrated in grandeur by Cuban-American Catholics in Florida, even during a pandemic.

It remains to be seen how the candidates will engage other Latino Catholic constituencies in states at play that also have healthy Latino populations. 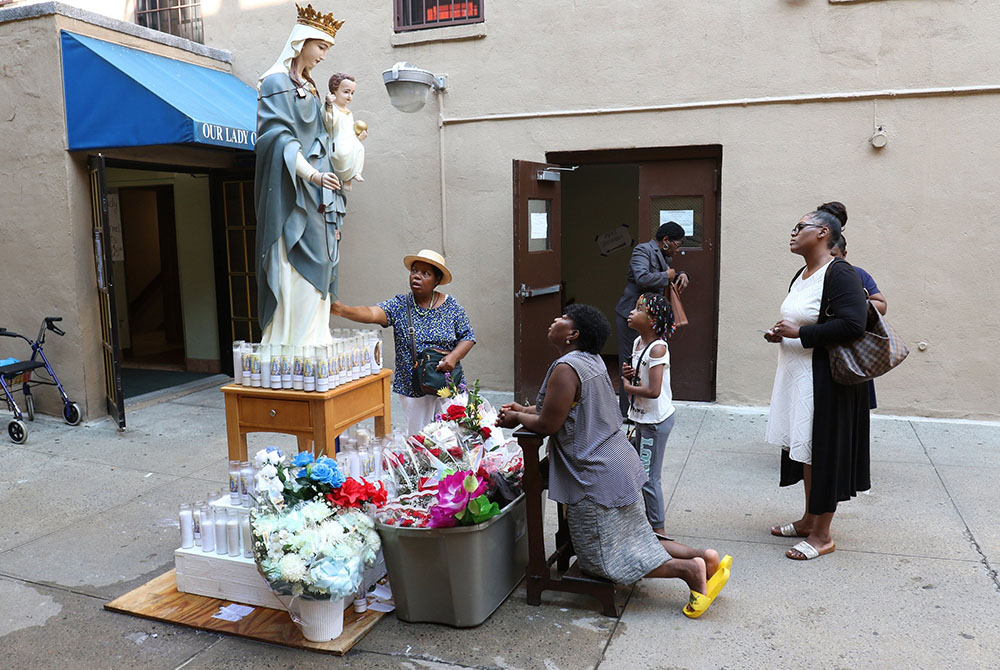 By and large, Latino Catholics, for the moment, tend to swing toward one party.

Figures from a 2016 election poll by the nonpartisan Public Religion Research Institute showed Catholics overall voted for then-candidate Donald Trump 52% to 45%. But a breakdown of that vote showed that while 60% of white Catholics voted for Trump and 37% did not, among Latino Catholics, 67% voted for his Democratic opponent, Hillary Clinton, and 26% did not.

Though Democrats seem to have a steady hold on that emerging population, a similar pattern going forward seems uncertain.

At the Immigration Law and Policy Conference, panelist Ronald Brownstein, senior editor at The Atlantic, said that "there's a chance that he will run better among [Latinos] than he did last time." Despite, he said, some of the concerns and vitriol against Trump that had emerged from some Latinos in the country following images of minors placed in detention in cages; Trump saying an Indiana-born federal judge who ruled against him couldn't be impartial because he was "Mexican"; and the president saying Mexico didn't send its best people, when it came to immigrants.

"Even pollsters who specialize in Hispanic voters will say ... there's a segment that responds to his message, his style, his, really, kind of a tough guy belligerent persona," Brownstein said.

Biden, on the other, has not seemed to make as many inroads as the party had hoped with Latino voters who might help in places such Texas or to get Latino voters out in larger numbers at the polls — a feat that has eluded other candidates.

"He may not be the person to unpick this lock," Brownstein said. "Community groups have been struggling for years to figure out how to meaningfully move those turnout numbers."

The pandemic also has added a layer of complexity, mainly just getting a population ravaged by COVID-19 to physically go to polling stations after thwarted efforts to increase mail-in voting in Texas and elsewhere.

Corbett said organizations such as his Hope Border Institute are "working diligently to educate the community that there are ways that those who can vote (can do so safely)."

But in a community where the social aspect is so ingrained in the culture, some, like Brownstein, worry that the pandemic will take its toll on the Latino vote where it counts: at the voting booth.

"I'm personally skeptical ... with the pandemic and all of its impact on door-to-door and person-to-person organizing, which is very, very, important in the Hispanic community," he said.

This story appears in the Election 2020 feature series. View the full series.
A version of this story appeared in the Oct 16-29, 2020 print issue under the headline: Latinos might hold key to this election.