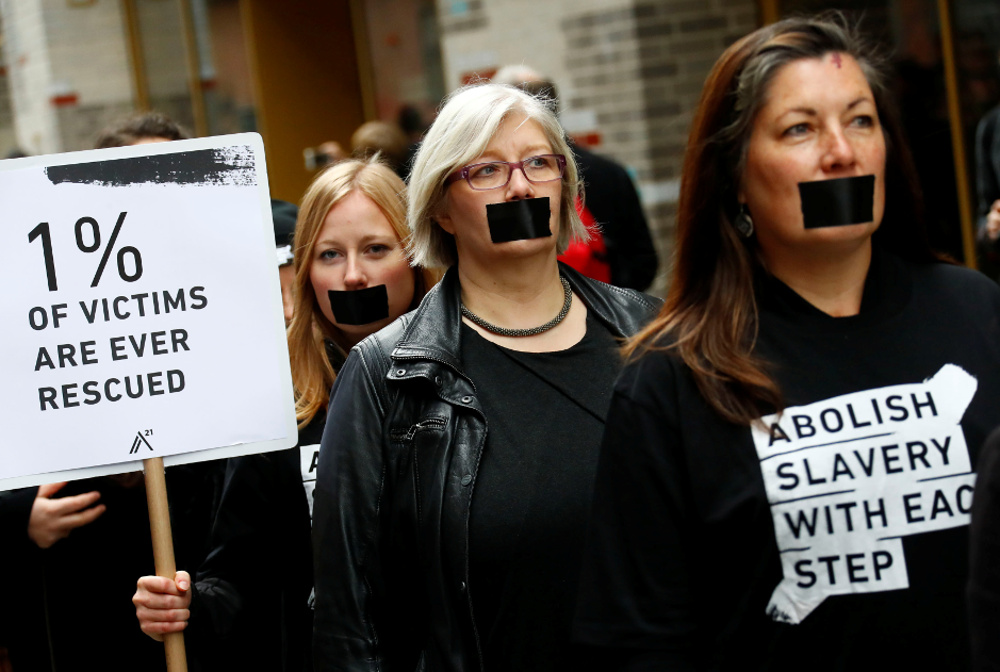 Activists take part in a "Walk for Freedom" in 2018 to protest against human trafficking in Berlin. (CNS/Reuters/Fabrizio Bensch)

Nationwide efforts to confront human trafficking received a boost in the new year as President Donald Trump signed a bill reauthorizing federal expenditures for prevention and assistance programs across the federal government.

The president of the U.S. Catholic Sisters Against Human Trafficking welcomed the Jan. 8 signing of the law, for which it had advocated with members of Congress.

"This comprehensive bill allocates funding for a number of projects that address the acute need for increasing awareness across a variety of sectors, prevention efforts and services for victims of both commercial sex and forced labor trafficking," Sister Anne Victory, a member of the Sisters of the Humility of Mary, told Catholic News Service Jan. 9.

Rep. Chris Smith, R-New Jersey, introduced the legislation and shepherded it through Congress. Both houses of Congress overwhelmingly approved the measure.

Smith said in a news release that federal spending under the law will reach across international borders through several government agencies.

The bill was named for the prominent 19th-century African-American civil rights social reformer and abolitionist.

The law provides $18 million to the departments of Justice and Homeland Security to fund the International Megan's Law, which since 2016 has mandated a visual identifier to be placed on the passports of people convicted of sex offenses involving a minor. The law also requires convicted offenders to notify law enforcement 21 days before traveling abroad.

Since the International Megan's Law was passed, 3,442 people have been denied entry into the U.S. or other countries, according to Smith's office.

The newly signed U.S. law also authorizes $315 million to the Department of State for an array of prevention efforts internationally including collaboration with overseas law enforcement agencies and nongovernmental organizations, and the creation of a complaint procedure in U.S. embassies to be better aware of traffickers exploiting the U.S. entry system.

Another $78 million will be allocated to the Department of Health and Human Services for age-appropriate education for children on trafficking prevention. The department also will continue to operate the National Human Trafficking Hotline at (888) 373-7888.

Funding is set aside for shelter, therapy and reintegration of trafficking victims into society.

Another $20 million is authorized for the Department of Labor to facilitate trafficking-free supply chains in private businesses and government purchases and to inform the Department of Homeland Security of imports that may contain trafficked products to block entry into the country.

In addition, $1 million will be used for training airport personnel, flight attendants and pilots to recognize potential trafficking victims in transit.

The law is the fifth anti-human trafficking law authored by Smith. It received support from a cross section of organizations including the U.S. Conference of Catholic Bishops, National Center for Missing and Exploited Children, Alliance to End Slavery and Trafficking, and National Domestic Workers Alliance.