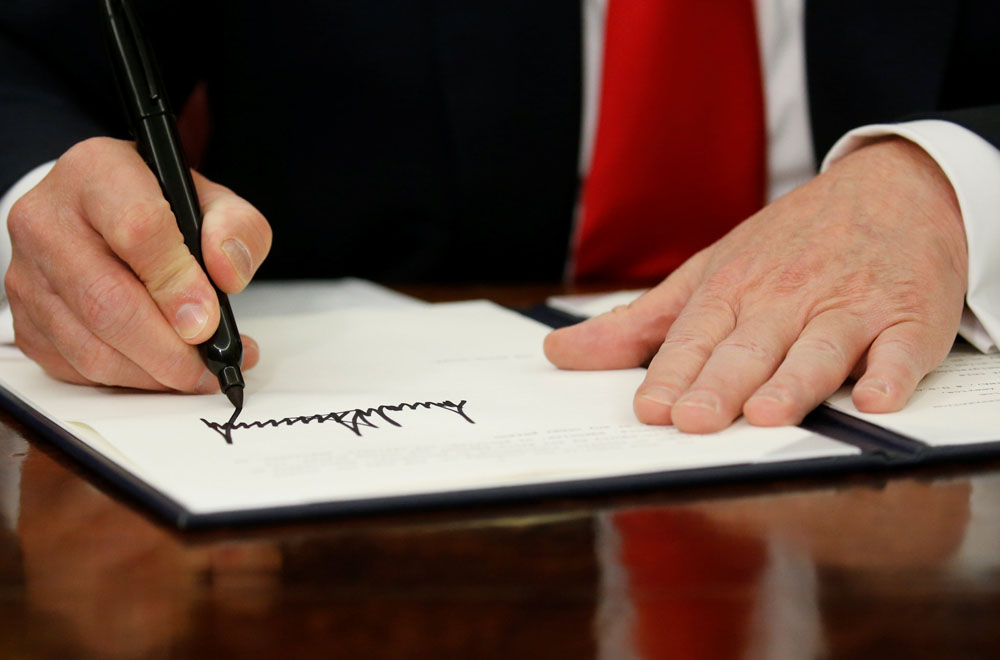 President Donald Trump signed an executive order Wednesday that will allow immigrant families to remain together while continuing his administration's zero tolerance policy to prosecute all people who enter the country illegally.

The order states it is the policy of the administration "to maintain family unity, including by detaining alien families together where appropriate and consistent with law and available resources," meaning immigrant families would still be held in detention facilities while the parents were prosecuted for illegal crossings. It adds the administration will continue to "rigorously enforce our immigration laws" and that the only legal way to enter the country is at designated ports of entry at appropriate times.

The move comes as an about-face after Trump and officials in his Cabinet and the White House spent days defending the zero tolerance policy against sharp public outrage, falsely claiming that they were only enforcing laws passed by Democrats and that Congress alone could end the practice through new legislation.

The order does not say anything about reuniting families who have already been separated.

"You're going to have a lot of happy people," Trump told reporters as he signed the order in the Oval Office. The president said he "didn't like the sight or the feeling of families being separated." 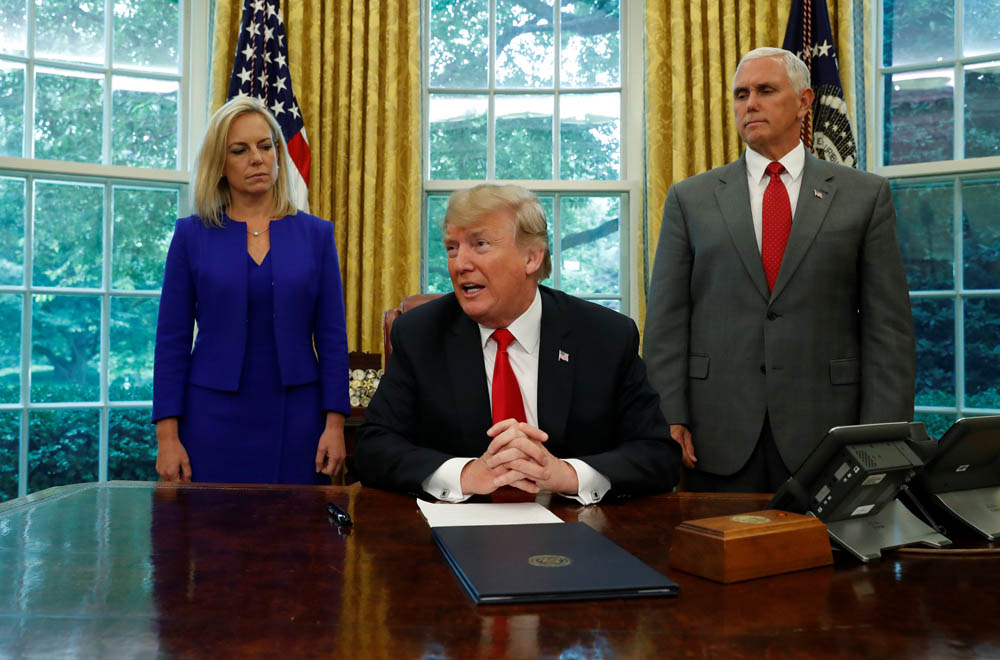 President Donald Trump is seen with with Secretary of Homeland Security Kirstjen Nielsen and Vice President Mike Pence at the White House June 20, prior to signing an executive order to halt the separation of families. (CNS/Leah Millis, Reuters)

"So we're keeping families together, and this will solve that problem," Trump said. "At the same time we are keeping a very powerful border. And it continues to be a zero tolerance. We have zero tolerance for people that enter our country illegally."

Since the zero tolerance policy's introduction in early May, more than 2,300 children had been separated from their parents, according to the administration.

Los Angeles Archbishop José Gomez said on Twitter "I welcome the President’s executive order ending the cruel family separation policy." He also called on Congress to pass bipartisan legislation that provides a path to citizenship for immigrants brought into the country illegally as children, also known as Dreamers, and that also secures the border.

In a statement, Bishop Michael Olson of the Fort Worth, Texas, Diocese said he was "grateful" for the executive order that placed a priority on the safety of vulnerable migrant children and placed "a preference for keeping families together as they await a more prompt adjudication of their cases."

He joined Gomez in saying the situation still requires action from Congress to address comprehensive immigration reform and "to provide a plan to address the needs for the 2,000 children already separated from their parents during the past seven weeks."

"The Catholic Diocese of Fort Worth and Catholic Charities Fort Worth remain prepared to assist those children in need of foster care and immediate relief during these difficult times," Olson said.

Faith in Public Life, a national network of tens of thousands of clergy and faith leaders, called the order "morally deficient" and said it replaces "family separation on the southern border with indefinite incarceration of immigrant families."

"Children belong with their families, not in cages or in even worse conditions. Merely stopping the inhumane practice of ripping children from their parents’ arms is insufficient," said Jennifer Butler, CEO of Faith in Public Life, in a statement. "The Trump administration must end its wrongheaded ‘zero tolerance’ policy that subjects asylum seekers and immigrant families to indefinite detention. The administration must also immediately reunite the families it has shattered."

Public furor toward the zero tolerance policy, as well as another policy severely restricting the ability of migrants to claim asylum to flee domestic or gang violence, swelled in recent days as footage showed children held in chain-linked, caged areas at border detention facilities, and audio was released of their cries for their parents. Tent cities popped up in southern Texas to house migrant children, as did a former Walmart in Brownsville.

Earlier in the day, Pope Francis placed his papal support behind the stance of the U.S. Conference of Catholic Bishops, who a week earlier called the policy of separating families "immoral."

At a demonstration Tuesday outside an Immigration and Customs Enforcement detention facility in El Paso, Msgr. Arturo Bañuelas denounced the policy: "Our children are being separated from their parents. This is wrong, it is immoral, it is unjust, and it is cruel."

Bañuelas, pastor of St. Mark Catholic Church and longtime immigration advocate, called it hypocritical for the government to use the Bible "to promote unjust, sinful and cruel policies that traumatize and torture families" — a reference to comments from U.S. Attorney General Jeff Sessions in which he quoted St. Paul that people should "obey the laws of the government because God has ordained them for the purpose of order."

"The Bible says administer true justice," the pastor said. "Show mercy and compassion to one another. Do not oppress the widow or the foreigner or the poor. Do not plot evil against each other. Also, it says you must treat the foreigner living among you as native born and love him and her as yourself."

Bañuelas continued: "Our president goes across the world and shakes hands with a murderous dictator, then comes to our country and closes the door to freedom for immigrants escaping violence and death, handcuffs them, snatches children from their parents, sending them to baby prisons to endure torture by being separated from their parents. This is shameful, it's a disgrace and it has to stop."

That same day, Trump told a meeting of small-business leaders in Washington that the only options available to him were to either release all illegal immigrant families or arrest the adults for illegal entry. He asked for Congress to provide a third option: "the legal authority to detain and promptly remove families together as a unit."

"We want to solve family separation. I don’t want children taken away from parents. And when you prosecute the parents for coming in illegally, which should happen, you have to take the children away," he said.

Catholic organizations, including women religious congregations, have been among those who publicly rebuked the family separation policy, with dozens of U.S. bishops issuing individual statements and affirming stances of the bishops' conference.

The Center for Applied Research in the Apostolate referred to data from the 2016 American National Election Study that showed roughly two-thirds of Democratic and politically unaffiliated Catholic adults, along with half of Republican Catholics, supporting immigrants without proper documentation to remain the country and eventually qualify for U.S. citizenship.

Overall, two-thirds of the country opposed the separating immigrant families at the border, according to a CBS News poll.

In a series of tweets Wednesday, in both English and Spanish, Chicago Cardinal Blase Cupich welcomed the pope's support of the U.S. bishops who called the policy "contrary to our Catholic values."

Cupich reiterated that the administration "could, if it so desired, end these wanton acts of cruelty, today" and said every day it continues "deepens the stain on America's soul and reputation."

"Every so often, history presents circumstances that test the soul of a nation. We are living in one of those moments," Cupich said. "Whatever this nation of immigrants does for the least of these brothers and sisters of ours will define us for decades to come, in the world’s eyes, and in God's."

As word spread that the president was preparing to issue an executive order, Congress continued to explore possible legislative fixes to the nation's immigration system. While the Senate was looking at ways to address the family separation situation in the short term, two bills in the House of Representatives sought more sweeping changes.

Both bills contain provisions "that cause us serious concern," said Bishop Joe Vasquez, chair of the U.S. bishops' Committee on Migration. He said the bishops "cannot, in good faith, endorse" a bill proposed by House leadership that would raise hurdles for asylum applicants to claim a credible fear, eliminate protections for unaccompanied minors and lead to an increase in the number of children and families held in detention.

"We believe that any such legislation must be bipartisan, provide Dreamers with a path to citizenship, be pro-family, protect the vulnerable and be respectful of human dignity with regard to border security and enforcement," Vasquez said.

In a column June 19 for his archdiocese's newspaper, Gomez condemned the cruelty of tearing immigrant children from their parents and holding them in "large warehouses being used as child internment camps" where rules restrict shelter workers from touching or holding the distraught.

"It is hard to write these words. I cannot believe this is happening in our country. But this is where 25 years of bipartisan failure on immigration reform has led us," wrote Gomez, himself a Mexican immigrant.

"We are now a nation where 'zero tolerance' means no mercy. We seem proud to announce that we will no longer grant asylum to victims of domestic abuse and gang violence. In the name of protecting our borders, we are willing to break up families and shatter the lives of innocent children."

"What we are doing now is wrong — on the borders, in the cruel partisanship and self-interested political calculations of our immigration debates.

"Our national conscience has been darkened by fear, by economic insecurity and by years of 'dehumanizing' rhetoric about immigrants from politicians and media figures," said Gomez, who was set to lead a novena ahead of a special Mass for immigrants on June 24.

This story appears in the Families Separated at the Border feature series. View the full series.
A version of this story appeared in the June 29-July 12, 2018 print issue under the headline: After days of outrage, Trump orders end to family separation at border.