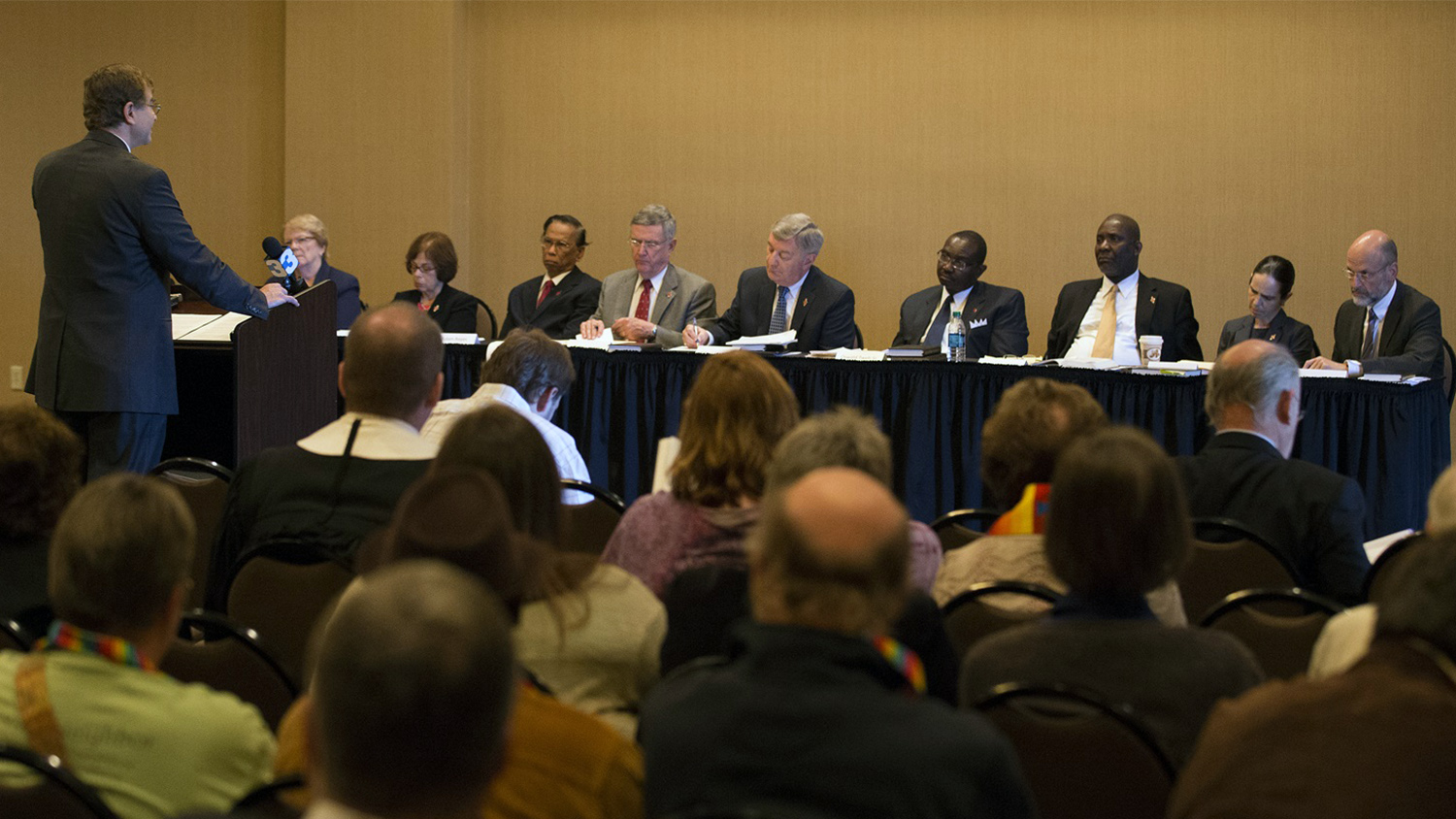 Documents filed with the United Methodist Church's top court are shedding first light on specifics of long-awaited proposals to avoid schism in the second-largest Protestant denomination in the United States.

The three plans were published July 17 as part of the docket for the United Methodist Church Judicial Council's October meeting. The denomination's Council of Bishops is asking its top court for a decision on whether those plans and related petitions are constitutional.

"We are asking for this so that we can gain greater clarity about constitutional issues within the three plans, and in service to and support of the delegations, who will do extremely important work in a very limited amount of time," Bishop Kenneth H. Carter, president of the Council of Bishops, said in a written statement last week.

The Rev. Maidstone Mulenga, director of communications for the Council of Bishops, described the request in an email as "a pre-emptive move by the bishops."

The three plans were expected to be made public earlier this month as part of the Commission on a Way Forward's report to the upcoming special session of the General Conference on sexuality, but their release was postponed until they could be translated into all the official languages of the global denomination's General Conference: English, French, Kiswahili and Portuguese. That work is expected to be complete by July 30, but the Council of Bishops noted on its Facebook page that it has "no control over the Judicial Council procedures and deadlines."

At the 2016 General Conference in Portland, Ore., delegates had voted to defer all proposals on issues related to sexuality to a specially appointed commission and left the door open for a special session.

The denomination's rulebook, the Book of Discipline, states that "the practice of homosexuality is incompatible with Christian teaching" and "self-avowed practicing homosexuals" cannot be ordained as ministers, appointed to serve or married in the church. But United Methodists long have been divided on their beliefs about sexuality.

The Commission on A Way Forward concluded its work earlier this year, and bishops recommended one of the three plans it put forward: the so-called One Church Plan. Its report to the special session of the General Conference, scheduled for February 2019, also includes the Connectional Conference Plan and Traditional Plan, as well as proposed legislation to put each into effect.

Here is a brief summary of each plan:

The first of 17 petitions that would enact bishops' recommended plan begins with the words, "We agree that we are not of one mind regarding human sexuality."

The One Church Plan acknowledges "persons of good conscience" can interpret what Scripture says about sexuality differently. It affirms both those who believe it does not "condone the practice of homosexuality" as well as those who believe it "calls us to reconsider the teaching of the church with respect to monogamous homosexual relationships."

Related petitions would amend the Book of Discipline to remove the language about incompatibility with Christian teaching and marriage being limited to a man and woman. They would allow regional decision-making bodies called annual conferences to determine whether to ordain LGBTQ clergy and allow individual churches to vote whether to perform same-sex marriages in their buildings. They also would clarify that no clergy would be required to perform a same-sex marriage and would allow them to transfer or be reassigned if their beliefs conflict with those of their churches.

Bishops could not prevent or require a pastor or church to perform a same-sex marriage under the plan, and they would not be required to ordain LGBTQ clergy, who could be ordained instead by the larger jurisdictional conference's College of Bishops.

The Traditional Plan would clarify what is meant in the Book of Discipline by a "self-avowed practicing homosexual." That would include those who have publicly stated or told clergy they are "a practicing homosexual," or those in a same-sex marriage, domestic partnership or civil union.

It would make a way to recommend a bishop for an involuntary leave of absence or retirement and a Council Relations Committee to hear those requests, creating a "process by which the Council of Bishops may hold one another accountable." And it would strengthen current complaint procedures and penalties in the Book of Discipline.

It also would include language that bishops are not allowed to consecrate, ordain or commission "self-avowed homosexuals" even if they have been elected or approved by the appropriate church body, and it would require bishops to sign a statement certifying, "I will uphold United Methodist standards on marriage and sexuality in their entirety." If they do not, they would be subject to review by the Council Relations Committee.

As part of the process to determine whether to ordain a candidate, the plan says the Board of Ministry "shall conduct an examination to ascertain whether an individual is a practicing homosexual, including information on social media."

The plan would include sections regarding sexuality in the parts of the Book of Discipline that those connectional conferences could change or adapt to "more fruitfully accomplish our mission in various contexts."

The so-called Traditional Connectional Conference would define marriage as between one man and one woman, would not allow same-sex weddings or LGBTQ clergy and would express a "covenantal commitment to a more traditional understanding of the doctrinal and moral standards of the church with enhanced accountability." Like all proposed connectional conferences, it would choose its own name later.

The Unity Connectional Conference would acknowledge members "are not of one mind regarding biblical interpretations related to human sexuality." Clergy would be allowed, but not required, to perform same-sex weddings. Similarly, annual conferences could decide to ordain LGBTQ clergy, and local churches could decide to receive them.

In the Progressive Connectional Conference, all clergy would perform same-sex weddings, all annual conferences would ordain qualified LGBTQ clergy and all churches would welcome LGBTQ pastors who "match the needs of the congregation and its ministry."

A version of this story appeared in the Aug 10-23, 2018 print issue under the headline: United Methodist Church addresses human sexuality.