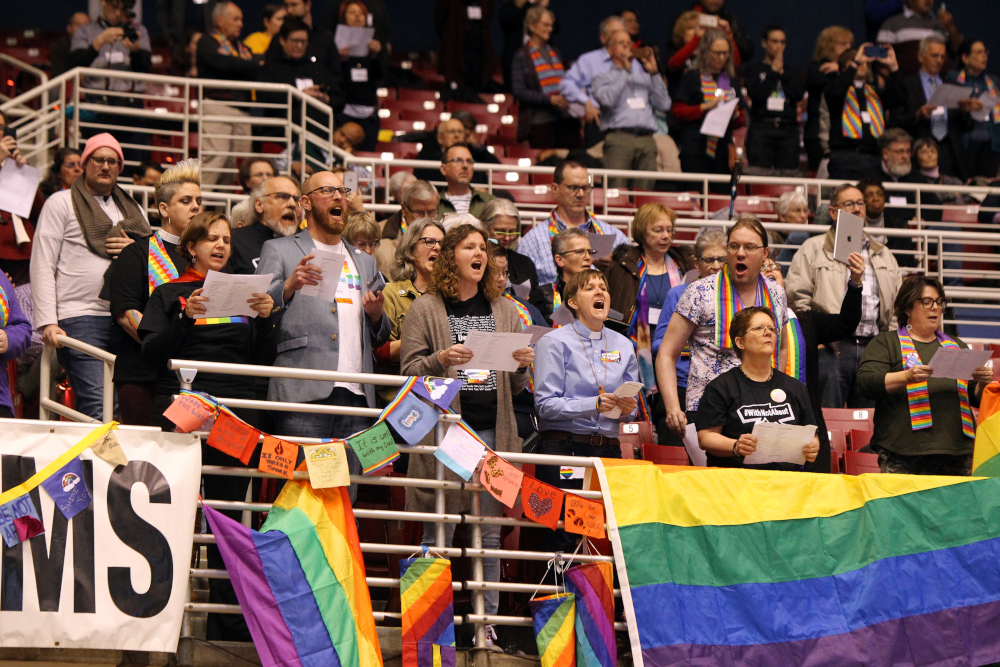 LGBTQ advocates react to the Traditional Plan being adopted at the UMC General Conference on Feb. 26, 2019, in St. Louis, Mo. (RNS/ Kit Doyle)

A special session of the United Methodist Church decided Feb. 26 to strengthen the denomination’s ban on the ordination and marriage of LGBTQ people.

Delegates to the General Conference, the global denomination’s decision-making body, passed the Traditional Plan by a vote of 438-384.

The Traditional Plan was one of three proposals for the church to move forward together despite deep divides over the inclusion of LGBTQ members that were presented to the conference by a specially appointed Commission on a Way Forward.

Those divides were on display during the three-day special session of the General Conference dedicated to sexuality at The Dome at America’s Center in St. Louis.

The Rev. Ken Carter, president of the denomination’s Council of Bishops, said the United Methodist Church — which counts both Hillary Clinton and Jeff Sessions as members — always has included diverse points of view. That was clear in St. Louis, Carter said.

"We are a church that includes people with different visions of the kingdom of God," he said. "I believe that’s the body of Christ."

The bishop also admitted that United Methodists in the United States have not always been able to get along. At other times, he said, they’ve found ways to work together.

Passage of the Traditional Plan left both its supporters and opponents alike worried about the future of the nation’s second-largest Protestant denomination.

But the Rev. Karen Oliveto of the Mountain Sky Conference, the only openly LGBTQ bishop in the United Methodist Church, tweeted afterward that the plan can’t "erase" LGBTQ people from the denomination.

"For children will receive the waters of baptism & know God claims them," she tweeted. "Some will hear a call to ministry. Some will be queer. And then it starts all over again"

Constitutional issues
Earlier in the day, a last-ditch effort to pass an alternate proposal, known as the One Church Plan, failed. That plan, recommended by the denomination’s Council of Bishops, would have allowed individual churches and regional annual conferences to decide whether to ordain and marry LGBTQ members. 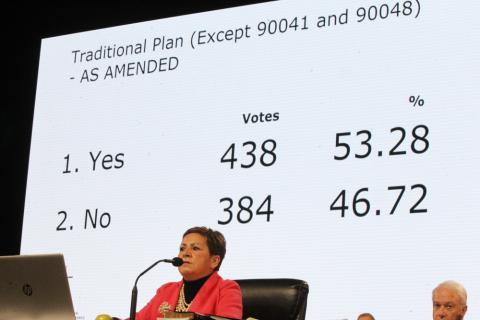 Earlier in the day, the United Methodists' top court ruled that parts of the Traditional Plan were unconstitutional, requiring delegates to amend them. Only one of those petitions was amended before it passed after hours of passionate and sometimes rancorous debate.

Much of the discussion as amendments were proposed and debated took aim at the way the petitions that made up the plan singled out LGBTQ people. Some opponents attempted to delay the vote with a series of amendments.

"We’re going to amend until the Monster trucks roll in!" said the Rev. Mark Holland, a delegate from the Great Plains Conference.

Holland, whose Mainstream UMC group had advocated for the One Church Plan, was referring to the next event scheduled at the conference center where the Methodists were meeting: Monster Jam. The General Conference general session had a hard stop at 6:30 p.m. local time, due to that event.

As the Traditional Plan passed with 53 percent of the vote, observers supporting the full inclusion of LGBTQ members in the church began to sing the hymn "Blessed Assurance." A number of delegates, some wearing rainbow-colored stoles, circled at the center of the conference floor.

Following the vote, a motion to appeal the vote on the Traditional Plan to the denomination's top court, the Judicial Council, passed. Petitions offering an exit plan to churches that want to leave the denomination also passed.

The General Conference continued as observers in the stands shouted, "Stop the harm!" and people streamed into the lobby outside the doors to the conference floor where delegates were seated, chanting and singing hymns.

The Judicial Council will review the Traditional Plan at its next scheduled meeting: April 23-25 in Evanston, Ill. Any piece of legislation declared unconstitutional at that meeting will not be included in the Book of Discipline, said the Rev. Gary Graves, secretary of the General Conference, according to United Methodist News Service. All other changes will take effect Jan. 1.

A 'historic' day for supporters

Throughout the day, supporters of the Traditional Plan defended their interpretation of Scripture and stressed that, despite what some had expressed to the contrary, they love the LGBTQ people in the church.

"We all have friends and family in the LGBTQIA community that we love and we do value as beloved brothers and sisters," said delegate Aislinn Deviney of the Rio Texas Conference, who referred to herself as a young evangelical.

At the same time, Deviney said, many young people "fiercely believe marriage is between one man and one woman."

Mark Tooley, president of the conservative Institute on Religion and Democracy, called Tuesday a "momentous" and "historic" day. Approving the Traditional Plan signals the denomination is "moving from its USA liberal Mainline identity to a new global identity rooted in Christian orthodoxy," Tooley said in an email.

"The church is following a very different path from its sister USA Mainline denominations, all of which are fast declining," he said. 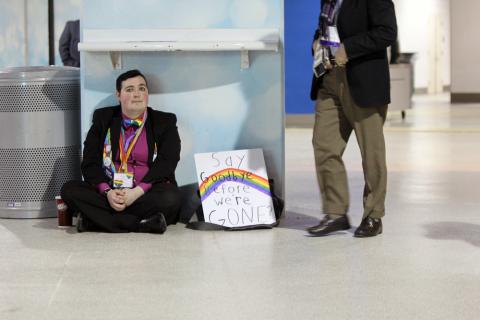 Alexander Dungan, of Garrett-Evangelical Theological Seminary near Chicago, sits near an exit of the America’s Center after a vote to adopt the Traditional Plan at the UMC General Conference in St. Louis on Feb. 26, 2019. (RNS/ Kit Doyle)

Tooley acknowledged some parts of the plan already had been ruled unconstitutional by the Judicial Council and were not amended before they were passed. Still, he said, the decision was important.

"Passage of even part of the plan that is constitutional is a symbolic great step forward into the church’s emerging global role," he said.

Tooley expects there will be additional legislation at the next regular meeting of the General Conference, scheduled for 2020 in Minneapolis.

"Overall, the church’s future, although with many bumps ahead, looks bright," he said.

The Rev. Pamela Lightsey, associate professor of constructive theology at Meadville Lombard Theological School in Chicago, feared the Traditional Plan could "usher in a host of greater evils."

"People are not yet talking about leaving, though we feel as though the church is attempting to leave us," Lightsey said before all the votes were finalized.

LGBTQ United Methodists and those who support their full inclusion in the church have to decide what comes next, said the Rev. Gregory Gross, a delegate from the Northern Illinois Conference and organizer with the Queer Clergy Caucus. 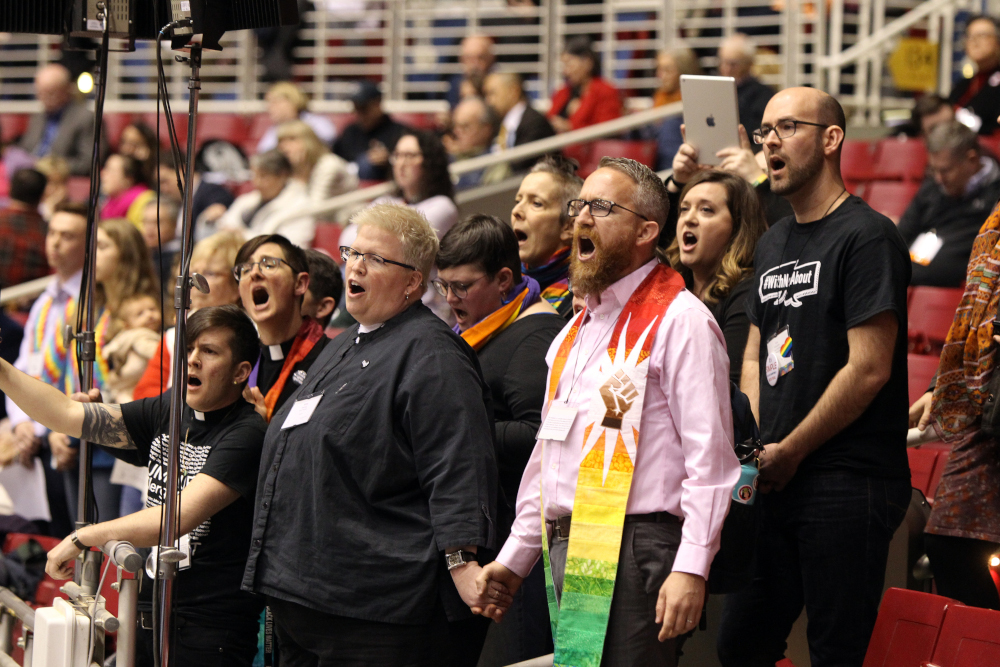 A group of LGBTQ advocates protests the vote to adopt the Traditional Plan during the UMC General Conference on Feb. 26, 2019, in St. Louis. (RNS/ Kit Doyle)

There may no longer be room for them in the denomination, he said. So LGBT Methodists may have to envision "a new expression of Methodism."

"It’s sickening how much people clearly dislike us — clearly do not like — LGBTQ people and must be threatened by us," Gross said. "It’s sickening and disheartening, and yet at least we finally know where people are."

The Rev. Jerry Kulah, a delegate from the Liberia Conference and dean of the Gbarnga School of Theology in the capital, Monrovia, said he was not worried about the plan now going before the Judicial Council.

"We have a Judicial Council that’s there for all of us to perfect whatever we do that may not be consistent with the Book of Discipline," Kulah said.

He had spoken in favor of the Traditional Plan earlier in the day from the conference floor, saying the church in Africa is growing "leaps and bounds" because of its commitment to "biblical Christianity," which he said supported the idea that marriage should be reserved for one man and one woman.

The United Methodist Church has more than 12.5 million members worldwide. About 58 percent of the delegates to the General Conference were from the U.S., where the United Methodist Church claims nearly 7 million members. Nearly 41 percent were from central conferences outside the U.S., including growing churches in African countries and in the Philippines. No breakdown was available on how delegates from each country voted.

For some delegates, the special session was a painful experience, no matter what side they were on.

During a lunch break on Tuesday, North Carolina Conference delegate LaNella Smith said she was struggling to decide how to vote during the special session.

She felt the pain in the room, Smith said. She also felt the fear. But the decisions seemed to fall along the same lines they have for years, she said.

The delegate said that the denomination's rules on sexuality were not a top priority at her church.

"For those of us in the black church — I was just talking with some friends of mine — this is not a black church issue, so it’s not an issue we discuss," Smith said. "It’s not an issue that we deal with. We’re dealing with our people having housing and jobs and food and child care, a young man not getting shot on the street. This issue is so far down the list of issues for us."

Jorge Lockward, a delegate from the New York Conference who wore a rainbow stole Tuesday, said that during the special session, United Methodists were honest about their divisions. Now, he said, it’s time to pray.

"Stay hopeful!" Lockward told a group of university students on the sidewalk after the General Conference had adjourned.

Coming into General Conference, Lockward said he hoped to see "the movement of the Spirit." That happened on Tuesday when delegates gathered in the center of the floor and bishops came down to pray with them.

Despite Tuesday’s results, Lockward said God was still at work in the United Methodist Church.

"What I know is that the wind of the Spirit is blowing and that we need to have our weather vanes nicely oiled … so we can follow it," he said.

A version of this story appeared in the March 8-21, 2019 print issue under the headline: United Methodist Church keeps LGBTQ ban.