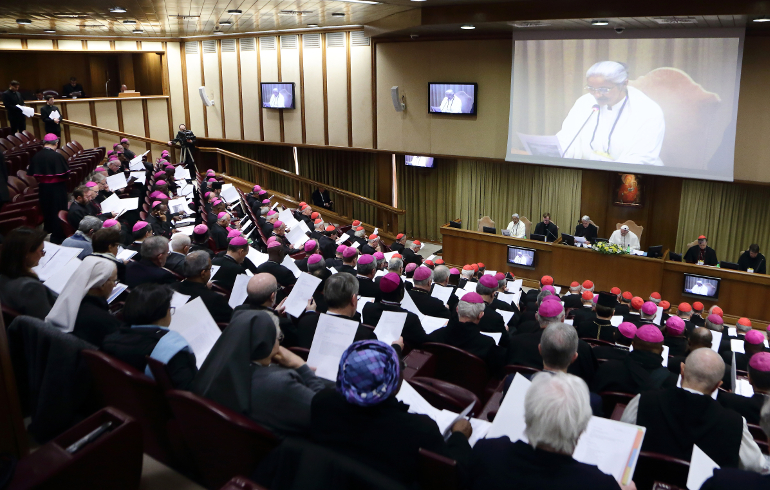 Pope Francis leads the opening session of the meeting on the protection of minors in the church at the Vatican Feb. 21. (CNS photo/Evandro Inetti, pool)

Presentations during the second day of Pope Francis' highly anticipated global summit on clergy sexual abuse focused widely on how Catholic bishops should police one another for signs of questionable conduct, while also making room for the "essential role" of laypeople in rooting out abuse.

Although the main speeches from Indian Cardinal Oswald Gracias and Chicago Cardinal Blase Cupich on Feb. 22 mentioned various issues facing the global Catholic Church in confronting the abuse crisis, they both stressed a desire for prelates to watch over each other.

Gracias, the first of the day to address the first of its kind summit, asked the 190 cardinals, bishops and heads of religious orders taking part at one point: "Do we really engage in an open conversation and point out honestly to our brother bishops or priests when we notice problematic behavior in them?"

The cardinal then said the prelates need to better develop a culture of "correctio fraterna," which recognizes criticism "as an opportunity to better fulfill our tasks."

Cupich began his own talk by outlining four broad principles under which the church should act in regards to abuse, underscoring in particular the need to listen to victims and to incorporate lay people "into every effort to identify and construct structures of accountability."

The Chicago cardinal later offered twelve different concrete steps that could be taken to ensure prelates who abuse or mishandle allegations are held to account. He brought forward aspects of a proposal he has previously made for the Vatican to empower metropolitan archbishops to examine accusations made against bishops in their regions.

Cupich called the proposal "a framework for constructing new legal structures of accountability in the church."

"We must move to establish robust laws and structures regarding the accountability of bishops … to supply with a new soul the institutional reality of the church’s discipline on sexual abuse," said the cardinal.

Francis' abuse summit is continuing through Feb. 24. The pope addressed the event briefly at its opening Feb. 21, but is not expected to speak publicly again until he delivers his concluding remarks.

The second day of the summit has been focused of the theme of accountability. Each day of the event begins with a prayer service and includes three presentations, and then time for working in small language groups.

Although canon lawyers and theologians have praised the idea as corresponding with how the church handled such issues in earlier centuries, abuse survivors and advocates have questioned whether prelates would sincerely investigate one another, even if the process included consultation with lay experts.

One of the other bishops taking part in the summit has also said he is not a fan of the proposal. "It's Caesar judging Caesar," Australian Archbishop Mark Coleridge characterized it in a wide-ranging Feb. 20 NCR interview.

Gracias focused in the beginning of his talk on the need for bishops to work with one another in handling abuse cases. He also emphasized that it is not a problem that is limited to any particular region of the world.

"No bishop may say to himself, 'This problem of abuse in the Church does not concern me, because things are different in my part of the world: This is just a problem for the USA, Europe or Australia,'" said the cardinal.

"This, my brothers and sisters, is just not true," he said. "I daresay there are cases all over the world -- also in Asia, also in Africa."

Both Gracias and Cupich mentioned the need for church leaders to admit that they have failed in the past to properly handle abuse.

"We all make mistakes and we need to learn from them," said Gracias. "We must repent and do so together, and collegially, because along the way we have failed. We need to seek pardon."

Cupich said some bishops had made "grave and callous errors" in handling abuse. He said that it was laypeople who "pointed out movingly and forcefully how gravely incompatible the commission, cover-up and toleration of clergy sexual abuse is with the very meaning and essence of the Church."

The Chicago cardinal said that creating structures of accountability that did not include laypeople would "inevitably deform the church and dishonor our God."

In his outline of twelve concrete steps that included the metropolitan proposal, Cupich said that "due attention should be given to including competent lay women and men with expertise in the process from beginning to end."

At a briefing later in the day Feb. 22, Maltese Archbishop Charles Scicluna praised Cupich's proposal to the summit, but also stressed the importance for laypeople to be involved in any accountability process.

"Participation of the laity in our discernment, in our structures of accountability is not an optional, it is not an appendix, [and] it is not an extra," said Scicluna. "It is fundamental to the well-being, but also to the being, of the church."

Also taking part at the briefing were Cupich himself and Boston Cardinal Sean O'Malley. They were both asked for an update on the progress of the Vatican's investigation into ex-cardinal Theodore McCarrick's rise through the ranks of the church hierarchy despite now proven rumors of sexual misconduct.

O'Malley said that the dioceses where McCarrick served are communicating with the Vatican for the investigation, adding: "I'm told that in the not too distant future there will be a report given."

The Boston cardinal, who also serves as the head of the Pontifical Commission for the Protection of Minors, was asked by NCR about a list of 21 action items Francis handed the participants of the summit for their consideration at the end of his speech Feb. 21.

Survivors have since criticized the list for not including a promise of zero tolerance for abusers.

"Those 21 points are just sort of a point of departure," said O'Malley. "I never interpreted that as going against zero tolerance."

The cardinal referred to Pope John Paul II's promise during his 2002 address to U.S. cardinals at the apex of the reporting on abuse scandals in Boston that "there is no place in the priesthood and religious life for those who would harm the young."

"That has to be a line in the sand," said O'Malley. "That's something that is so important for all of us."

The Vatican summit began Feb. 21 with five video testimonies from abuse survivors. The participants heard another testimony in the evening of Feb. 22 and will take part in a penitential liturgy Feb. 23.

Some survivors have expressed concern about Gracias' role in speaking to the gathering after a Feb. 21 BBC report criticized how the cardinal reacted to one accusation of abuse in 2015.

At an evening vigil with dozens of survivors outside Rome's Castel Sant'Angelo Feb. 21, one young Italian man cried as he recounted his own story of abuse.

"We must stop this," said Alessandro Battaglia. "All of us need you to act."