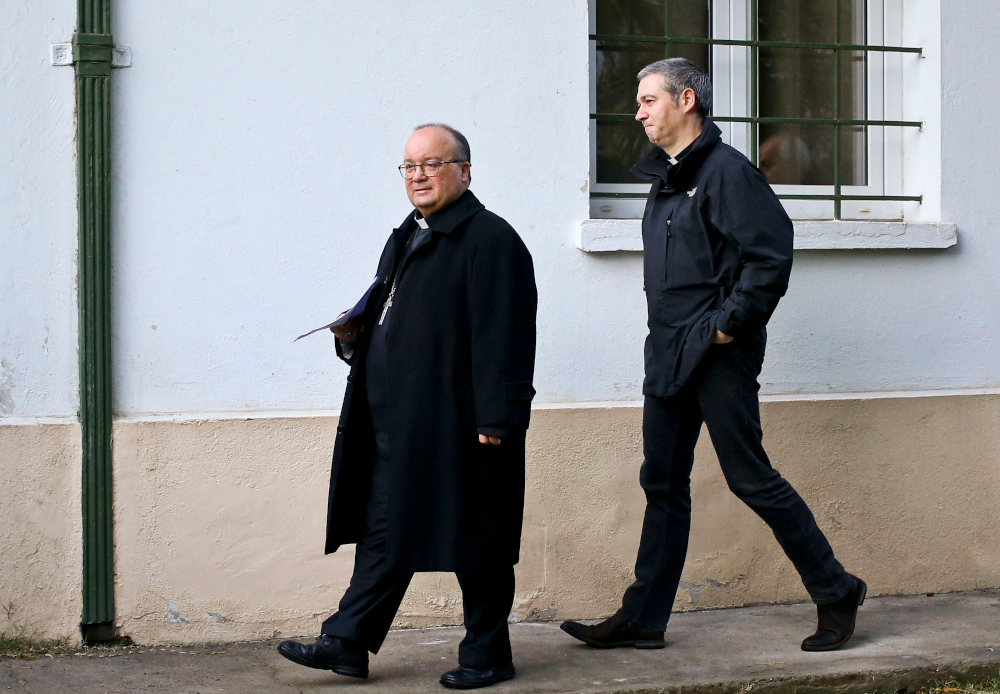 In this June 19, 2018 file photo, Archbishop Charles Scicluna, left, and Spanish Monsignor Jordi Bertomeu, right, walk in for a press conference, in Santiago, Chile. The Vatican announced Monday, March 2, 2020, that is sending Scicluna and Bertomeu, its top two sex crimes investigators, to Mexico on a fact-finding and assistance mission. (AP/Esteban Felix File)

The Vatican is sending its top two sex crimes investigators to Mexico on a fact-finding and assistance mission as the Catholic hierarchy in the world's second-largest Catholic country begins to reckon with decades of clergy sex abuse and cover-up.

Archbishop Charles Scicluna and Monsignor Jordi Bertomeu teamed up in 2018 to investigate the Chilean church and its wretched record of protecting pedophile priests — a bombshell expose that resulted in every active Chilean bishop offering to resign.

Their new mission to Mexico, due to take place March 20-27, was announced Mar. 2 in Mexico and at the Vatican. Officials stressed it was not an investigation per se but an assistance mission to help the Mexican church combat abuse.

Nevertheless, the Vatican embassy in Mexico City expressly asked victims to come forward to speak with the two prelates, offering victims an email address to arrange meetings or send their testimony, a phone number to call and total privacy and confidentiality. It stressed that Scicluna and Bertomeu would be "at the disposition of all those who want to share their experiences or to receive direction or assistance."

When Scicluna and Bertomeu went to Chile in 2018 to investigate a single old case of cover-up, they were stunned as more than 60 abuse survivors came forward to speak with them about a variety of cases around the country, providing enough testimony and evidence to fill a 2,600-page dossier.

Their report was crucial in helping Pope Francis realize he had completely misread the problem of sex abuse and cover-up in the church. The Argentine Jesuit apologized repeatedly and has taken measures in particular to try to ensure more accountability among bishops.

Scicluna and Bertomeu will meet with Mexican bishops, the superiors of religious orders in Mexico, as well as any survivors who choose to speak to them.

The Mexican bishops conference said it asked for the mission, saying it would benefit children and the most vulnerable in Mexico.

"We are certain it will help us respond better to these cases, looking for civil and canonical justice under the principle of 'zero tolerance' so that there is no impunity in our church," the bishops said in a statement.

The mission comes as the Mexican hierarchy is being forced to reckon with decades of sex abuse and cover-up, admitting recently that it had investigated 271 priests in the last 10 years for sexual abuse.

The admission, though, was belated and came as Mexican civil authorities have begun to ratchet up pressure after long deferring to the church, which wields enormous influence in Mexico. But earlier this year, Mexican lawmakers discussed several initiatives including removing the statute of limitations for child sexual abuse cases. Final approval is still pending.

In addition, two senators presented a legislative initiative to create an independent investigatory commission into clerical sex abuse in Mexico. It's fate, however, is unclear. The senators belong to the Morena party of President Andres Manuel López Obrador, but there is no timetable for voting and other party lawmakers have spoken out against the proposal.

Mexico is the second-largest Catholic country after Brazil, and Vatican officials have long known that the number of abuse cases that were being reported to the Vatican were a fraction of the total. The Mexican church though is powerful and well-entrenched, and victims have long been cowed into silence.

They are beginning to come forward, however, none more vocally than Ana Lucia Salazar, a Mexican TV personality who was molested repeatedly as a child by a Legion of Christ priest in Cancun. Her case was covered up for three decades until she went public last year, drawing so much attention to the problem that she forced Mexico's bishops and the Vatican ambassador to denounce the Legion publicly.

Scicluna, the Vatican's longtime sex crimes prosecutor, is intimately familiar with the Legion and the mechanisms of power in the Mexican hierarchy: The Maltese archbishop conducted the 2002-2003 investigation into the Legion's late founder, the Rev. Marcial Maciel, that resulted in him being forced to retire to a life of penance and prayer for having raped and molested his seminarians.

The Legion scandal has resurfaced anew recently, with the Salazar case spurring other Legion victims to come forward. Earlier this year, a group of former Legion priests prepared a list of 30 Mexican Legion priests who were accused of abuse and presented it to the Vatican ambassador. The number far exceeded the 33 priests worldwide that the Legion has admitted were abusers.

In a statement, the Vatican spokesman Matteo Bruni said the mission was one of technical assistance to help the Mexican church "confirm the steps it has already taken in the right direction to provide a correct response to victims of sexual abuse."