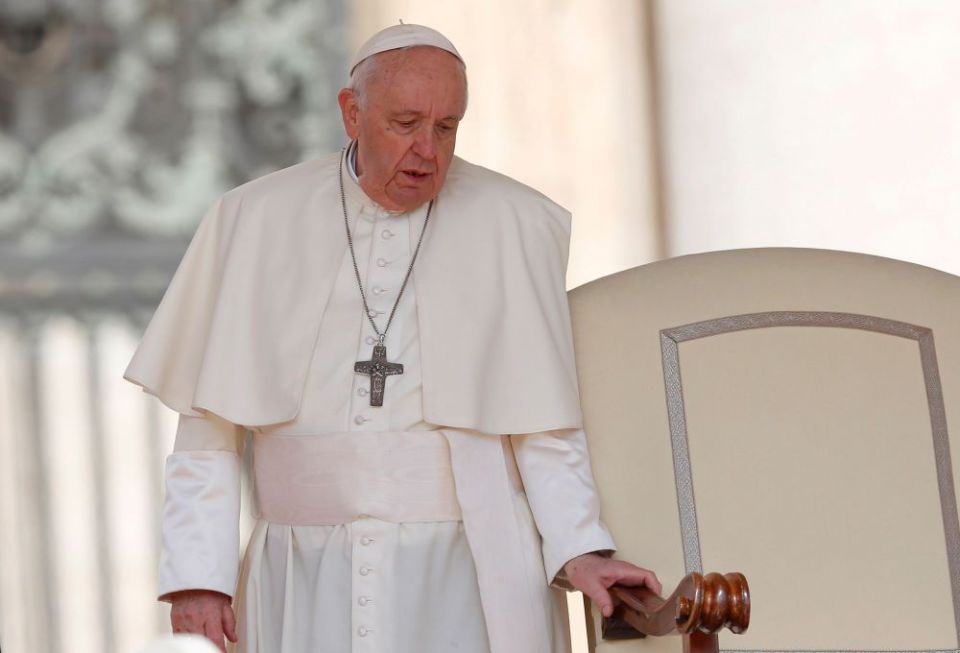 Pope Francis holds onto the arm of his chair as he arrives for the general audience in St. Peter's Square at the Vatican April 20. Since February, the pope, who has long suffered from sciatica, has repeatedly had difficulty walking, resulting in a number of modifications to his public schedule. (CNS/Paul Haring)

Rome — Argentine journalist and doctor Nelson Castro, who has become a friend of Pope Francis, says the Roman pontiff's knee pain would be greatly improved by losing weight, something Francis has told him he is trying to do.

"His [being] overweight is a key part in improving the pain he is suffering from his knee," Castro said in an interview with NCR.

Since February, the pope, who has long suffered from sciatica, has repeatedly had difficulty walking, resulting in a number of modifications to his public schedule. Francis was forced to cancel a Feb. 27 day trip to the Italian city of Florence and his plans to celebrate Ash Wednesday Mass to mark the start of Lent.

On April 22, Francis suspended his public appointments to undergo a necessary medical checkup following a demanding Holy Week schedule at the Vatican. 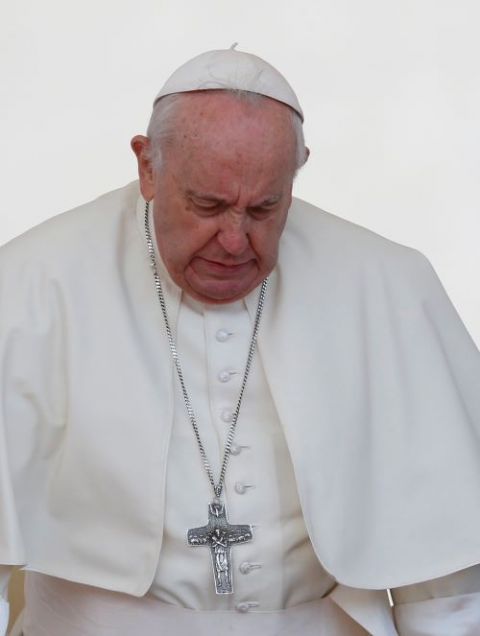 Pope Francis grimaces in pain as he gets up from his chair during the general audience in St. Peter's Square at the Vatican April 20. The pope told the Argentine newspaper La Nación his limited mobility and pronounced limp are due to a torn ligament. (CNS/Paul Haring)

Castro, who last visited Francis at the Vatican Feb. 14, said the pope told him at the time that he had lost just over 3 pounds.

In 2015, the Italian news agency ANSA reported that doctors had advised he cut back on his pasta intake.

"That's a real problem for him, because he likes eating," he joked, "And I know that his cook is very good."

Castro is the author of the 2021 book La Salud de Los Papas (The Health of the Popes), which details the health of the pontiffs from Pope Leo XIII to Pope Francis. The book, which Francis encouraged him to write, includes a 2019 interview between the pope and the physician.

In an April 22 interview with the Argentine daily newspaper La Nación, Francis said he is suffering from a torn ligament in his right knee, which he noted is being treated by icing and painkillers.

"Ligament recovery is slow at this age," the pope said, adding that doctors have assured him it will improve over time.

Castro said that based on the information the pope told him at the time, there is not a clear medical solution to the pope's knee problem. He said surgery could be an option to treat a rupture, but it would not necessarily be effective for inflammation.

In July, Francis faced the greatest health challenge to his nearly decade-long papacy when he was hospitalized for 10 days after having intestinal surgery during which doctors removed half his colon.

In his estimation, Castro said, the pope was "recovering very well from that operation."

"The day I saw him, his walking was very good and he wasn't in pain at that moment," he reflected.

Castro said that in footage of the pope during the Vatican's Holy Week events Francis appeared pleased to be out among the crowd of tens of thousands of pilgrims in St Peter's Square.

The pope already has a full summer travel schedule, with likely visits to Africa, the Middle East and North America.

"There is no question that should the pain worsen and worsen, it will be a difficulty for him to travel," Castro said.

While Popes John Paul II and Benedict XVI relied, at times, on a cane and a wheelchair for assistance in moving around, Castro doubted that Francis would be eager to go that route.

"He told me that he is following all of the advice of his physicians, and so far he hasn't received that kind of advice," Castro added.

En route to Rome after a two-day visit to Malta earlier this month, Francis acknowledged to reporters that his health is unpredictable, but said he remains optimistic.

A version of this story appeared in the May 13-26, 2022 print issue under the headline: Argentine doctor: Losing weight would ease Pope Francis' knee pain .