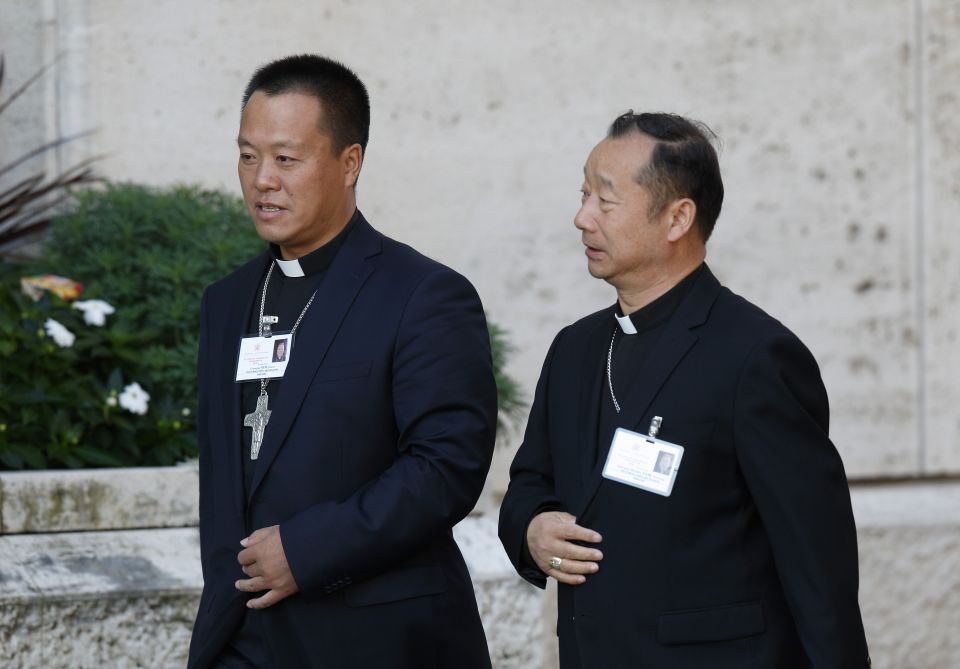 Bishop Joseph Guo Jincai of Chengde, China, and Coadjutor Bishop John Baptist Yang Xiaoting of Yan'an, China, arrive for a session of the Synod of Bishops on young people, the faith and vocational discernment at the Vatican Oct. 8. (CNS/Paul Haring)

Rome — The Catholic Church is one throughout the world, and Pope Francis' agreement with the communist government of China is a sign of that, Bishop John Baptist Yang Xiaoting of Yan'an told members of a Rome parish.

The 54-year-old bishop is one of two bishops from mainland China attending the Synod of Bishops on young people, the faith and vocational discernment.

He and the other synod delegate, 50-year-old Bishop Joseph Guo Jincai of Chengde, concelebrated Mass Oct. 7 at the Rome parish of Santa Maria ai Monti with Cardinal Francesco Coccopalmerio. The parish supports a charity that funds mission work throughout Asia, according to SIR, the news agency of the Italian bishops' conference.

Invited to say a few words, Yang started with the day's Bible readings about the creation of man and woman and about Jesus' teaching about marriage.

"Just as a family constituted by a husband and wife is always one, so is the church, which is one, holy, catholic and apostolic," the bishop said, according to SIR. "In Italy, in China or in any other country, Christ's love is the same."

The wisdom of the Vatican's provisional agreement with China, signed in late September, has been hotly debated; some view it as an essential step in ensuring the unity of Catholics in China with the universal church, while others view it as an unacceptable concession to the Chinese government and a betrayal of Chinese Catholics who have risked their lives for decades by refusing to allow the government to control the church.

Because the agreement was signed so close to the synod's opening Oct. 3, the two Chinese bishops were unable to clear an entire month from their calendars, said Paolo Ruffini, prefect of the Vatican Dicastery for Communication. So although they had government permission to attend the synod, they informed the pope they could not stay until it ends Oct. 28.

Yang, who studied in Rome, spoke to parishioners in Italian and told them that China's Catholics were hopeful that Francis, "and you, too," could visit China one day.

"In the love of Christ, in the love of God, we are always one family; the universal church is always like a family," he said. "Even if we live in different countries and even if there is diversity between our cultures, liturgies and other things, our faith in the Lord is always one."

The Catholic Church in China, he said, continues to need the prayers and support of Catholics outside the country. "Our church is like a child, it's not very mature, so we need your accompaniment, your help and your prayers, always in the love of the Lord."