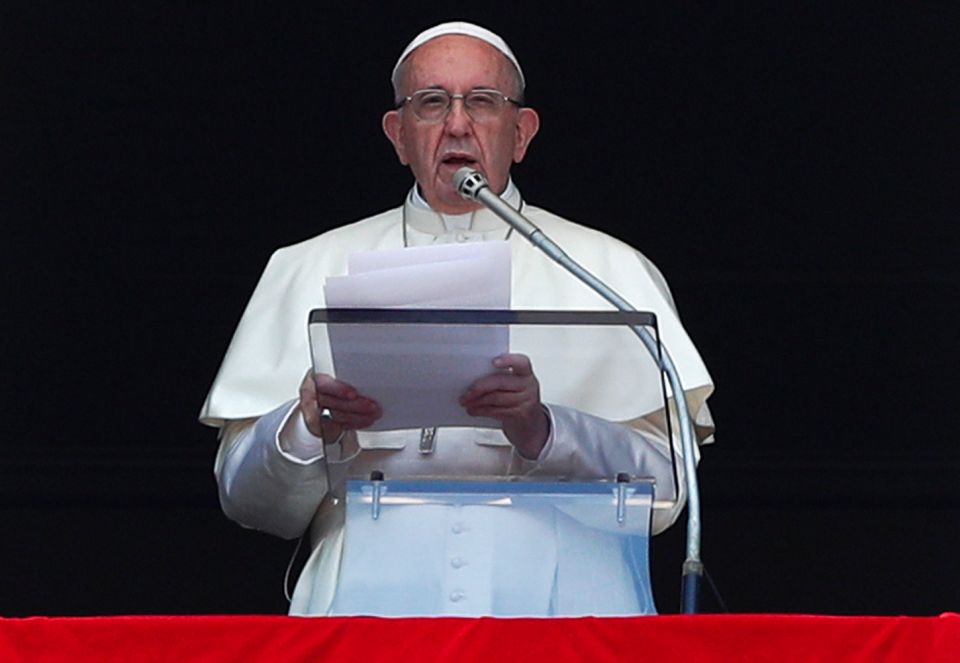 Pope Francis leads the Angelus from the window of his studio overlooking St. Peter's Square Aug. 5 at the Vatican. (CNS/Reuters/Max Rossi)

Washington — Doing God's will means first of all believing in Jesus and allowing love for him to translate into love for one's neighbors, Pope Francis said.

The Gospel story of the multiplication of loaves demonstrates the concern Jesus showed for people's daily physical needs, the pope said, but the passages that follow show how "it is even more important to cultivate our relationship with him, reinforcing our faith in him who is the 'bread of life' come to satisfy our hunger for truth, our hunger for justice, our hunger for love."

Before reciting the Angelus prayer Aug. 5 with visitors in St. Peter's Square, Francis offered a commentary on the day's Gospel reading, John 6:24-35, which tells of the crowds fed by Jesus following him and asking him what it means to do "the works of God."

Jesus answers, "This is the work of God, that you believe in the one he sent."

With his reply, the pope said, Jesus wants the crowd to take a further step in faith and "ask themselves the meaning of the miracle (of the multiplication of the loaves) and not just profit from it."

Jesus "wants to satisfy not only their bodies but also their souls, giving them the spiritual food that can satisfy their deeper hungers," Francis said.

The people thought that if they performed certain specific acts, God would respond with miracles like the feeding of the crowd with only five loaves and two fish, the pope said, but Jesus wants the people to know that God loves them as his own children and wants a relationship with them.

"This is a common temptation: to reduce religion to just following the laws, projecting onto our relationship with God the image of the relationship between slaves and their master," he said. "Slaves must do the tasks their master has assigned in order to receive his favor."

Telling the people that doing God's work means believing in Jesus shows that "faith in Jesus allows us to do the works of God," the pope said. "If we let ourselves be engaged in this relationship of love and trust with Jesus, we will be capable of doing good works that have the perfume of the Gospel for the good and the necessities of our brothers and sisters."

Vatican | Faith is a relationship, not a set of rules, pope says at Angelus