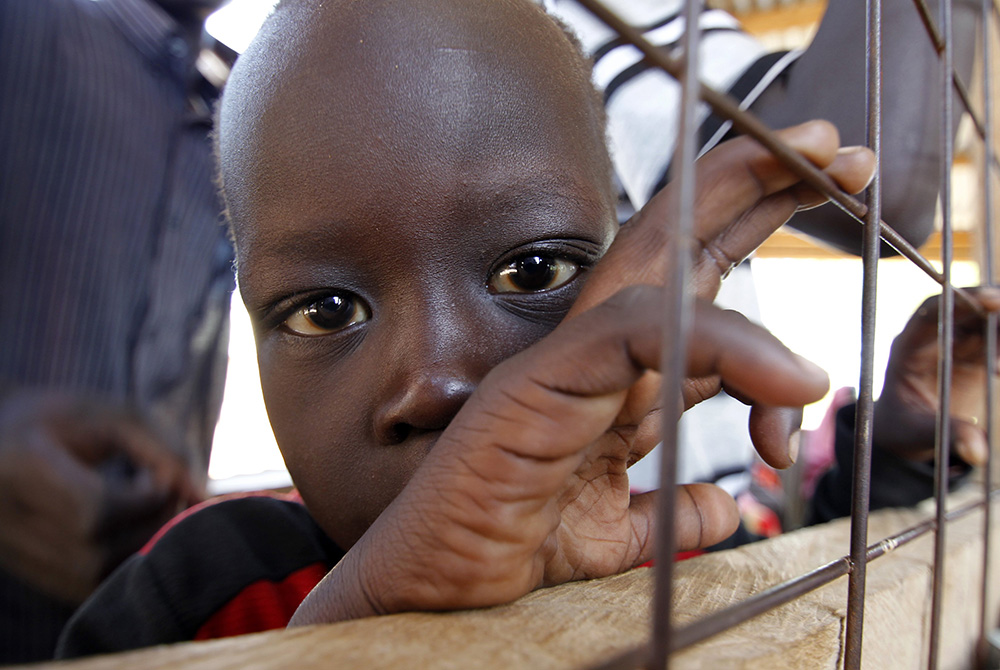 A child from South Sudan is pictured in a 2012 photo at a registration center in the Kakuma refugee camp in northern Kenya. Catholic bishops in Kenya are urging the government to shelve plans to close two refugee camps that host refugees who fled civil war and famine in Somalia and South Sudan. (CNS/Thomas Mukoya, Reuters)

Catholic bishops in Kenya are urging the government to shelve plans to close two refugee camps in the north, which host refugees who fled civil war and famine in Somalia and South Sudan.

The bishops' appeal came after the government ordered the U.N. Refugee Agency to close Dadaab and Kakuma refugee camps in northern Kenya within 14 days. The two camps host a total of 410,000 people, including a small number from South Sudan.

"It is highly unfortunate and regrettable that the intention by Kenyan authorities to close Dadaab and Kakuma refugee camps within a short time frame comes at a time that these people need help," said Archbishop Philip Anyolo, chairman of the Kenya Conference of Catholic Bishops. "This is the time to give protection and embrace the most vulnerable in our society."

He wants the government to shelve the decision, increase security for the refugees and treat them with care during the coronavirus pandemic.

Kenya first made public its intention to close Dadaab refugee camp complex in 2016. Then, the authorities charged that the camps had become a recruiting ground for al-Shabab, the Somalia based al-Qaida affiliate in East Africa.

Although the Kenyan high court has temporarily barred the closure, analysts say the camps controversy will persist as Kenya and Somalia engage in a maritime border dispute in the International Court of Justice.

Anyolo said hosting the refugees has been a good gesture, necessary, important and human to support the most vulnerable in the society. He said the refugees' lives had been disrupted by various reasons, including effects of climate change and insecurity.

"Forcefully returning refugees to Somalia, where there is still insecurity and attacks on civilians, will lead to more suffering of vulnerable women and children," Anyolo said, calling for a comprehensive approach to solve Kenya's complex refugee problem.