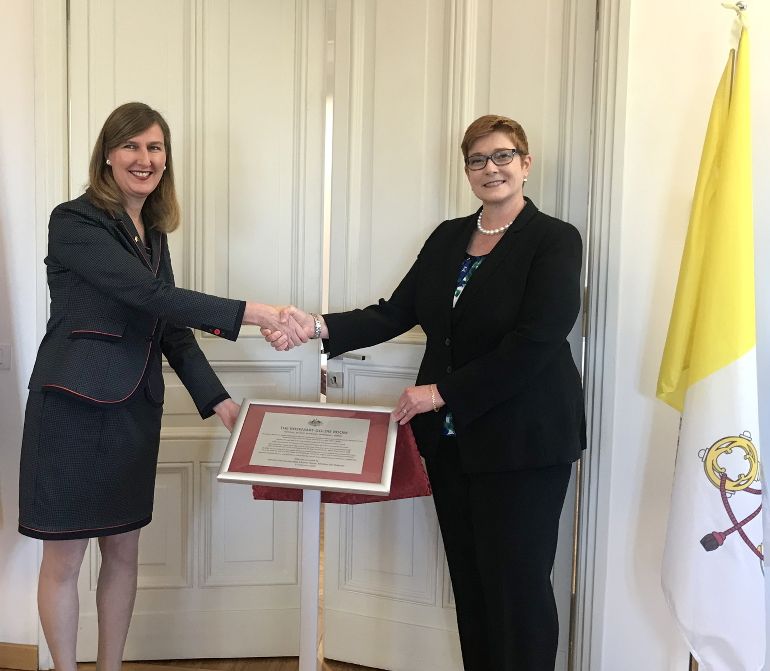 Australian Ambassador to the Holy See Melissa Hitchman shakes hands with Australian Defense Minister Marise Payne during the opening of a new conference room named for Rosemary Goldie at the embassy Feb. 13. (Photo courtesy of the Australian embassy to the Holy See).

Rome — The Australian embassy to the Holy See held a small commemoration ceremony Feb. 13 for Rosemary Goldie, the late Australian who was the first woman to hold a leadership post at the Vatican.

Australian Defense Minister Marise Payne, the first woman to hold her post, ceremonially opened a new conference room at the embassy named for Goldie, who served as undersecretary for the Pontifical Council for the Laity from 1967-76.

In a statement to the press, Payne called Goldie “a heroic figure with a legacy on which others have built.” She said “few have followed in the years since.”

Before serving on the laity council, Goldie was one of the first women appointed to attend the Second Vatican Council as an auditor and was an official observer at its last two sessions in 1964 and 1965.

She had previously served as the executive secretary for the International Congresses of the Lay Apostolate and as a staff member of Pax Romana, one of the oldest international lay Catholic movements.

Payne is traveling Feb. 13-14 in Rome and Brussels for meetings with counterparts from around the world. In Rome Feb. 13, she participated in a meeting of the Counter-Daesh (Islamic State) Coalition, which was co-hosted by Italian Defense Minister Roberta Pinotta and U.S. Defense Secretary James Mattis.

The new conference room at the embassy features a picture of Goldie sitting at her desk during her time as undersecretary at the laity council.

Vaccine proof not needed for Mass in Italy, but required for some functions