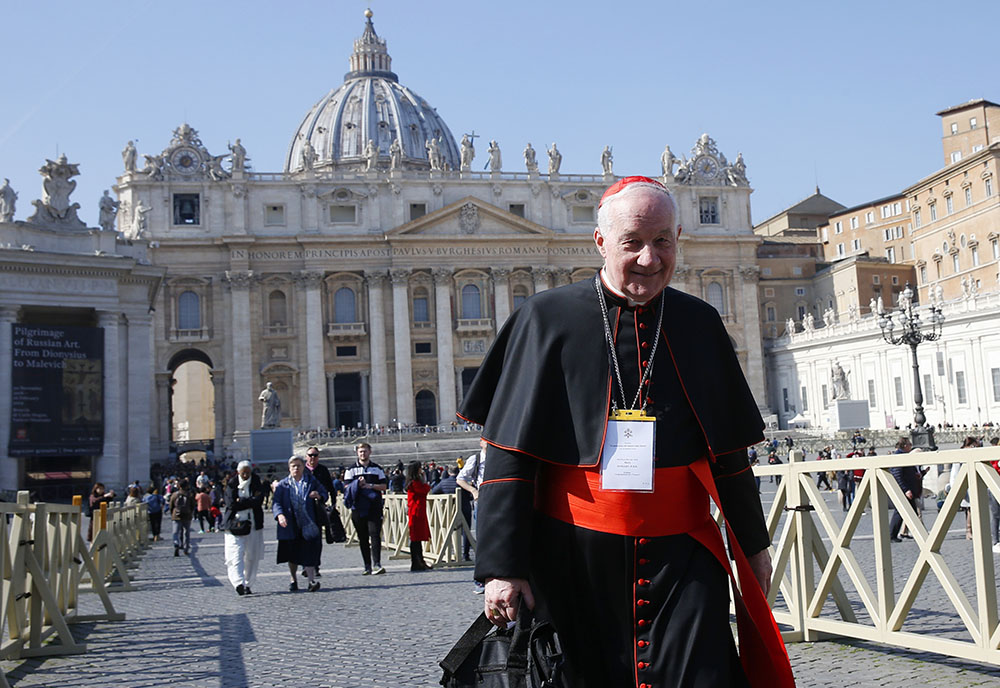 Cardinal Marc Ouellet, prefect of the Congregation for Bishops, walks through St. Peter's Square after attending the opening session of the meeting on the protection of minors in the church at the Vatican Feb. 21, 2019. (CNS/Paul Haring)

When Canadian Cardinal Marc Ouellet was first appointed in 2010 to lead the Vatican's Congregation for Bishops, the office that advises the pope on candidates to serve as Catholic bishops around the world, the former professor and theologian was "more attentive to the doctrinal dimension" of the job, he recalled.

"With Pope Francis, we've learned the accompaniment dimension," Ouellet told NCR. "We have learned that it's not enough to tell people what they have to do."

The Congregation for Bishops is one of the Vatican's most powerful offices, with a challenging mandate of vetting the right candidates to lead dioceses worldwide.

It's often a top-secret process, and Ouellet, who was widely considered papabile — meaning likely to be a contender for the next pope — in both the conclaves of 2005 and 2013, acknowledged that it's not an easy job. While he wouldn't give an exact number of how many people turn down the request to be appointed as a bishop, he said the sometimes-quoted estimate of 30% is "not far off." 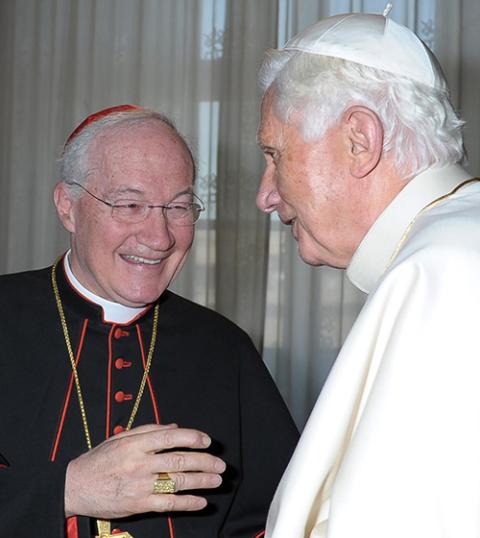 Ouellet was appointed to lead the congregation by Pope Benedict XVI and has stayed on under Pope Francis, though he acknowledges some of the focus of what's expected for him and the church's other bishops has changed.

"A pastor has to walk with the people," Ouellet said. "We have to teach always the truth, but at the same time, to be attentive, to be compassionate and merciful. That's what I've learned with Pope Francis, and I think it's a plus."

But the 77-year-old cardinal, who is likely facing the end of his mandate in office, having served beyond two five-year terms as head of a curial department, isn't giving up on doctrine.

In fact, on Feb. 17, he will preside over a three-day international symposium on the priesthood taking place at the Vatican. The conference will bring together a range of bishops, priests, religious formators and experts from around the world to explore the theological dimensions of the priesthood, including celibacy.

During a Feb. 15 interview with NCR at the congregation's office just off St. Peter's Square, Ouellet said he hopes the conference will find a balance in making a case for the importance of the priesthood, while also resisting the temptations of clericalism.

Ouellet said the antidote to clericalism, which Francis has repeatedly warned against, can be found in community.

"The focus of the symposium will be on the participation in the one priesthood of Christ," he said, which includes all of the baptized. 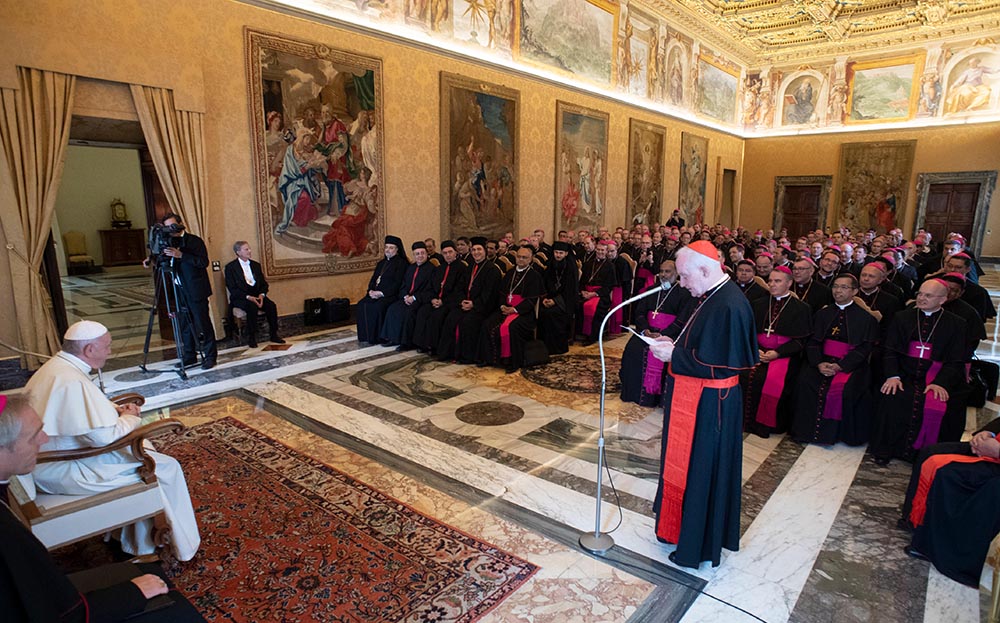 Pope Francis listens as Cardinal Marc Ouellet speaks during a meeting with recently appointed bishops from around the world at the Vatican Sept. 13, 2018. (CNS/Vatican Media)

One of the challenges in the post-Reformation era, said Ouellet, is a "very clerical view of the church," which developed as a way of defending the priesthood and the church's hierarchical structure.

"We ended up impoverished on both sides," he reflected, "because they [Protestant denominations] kept the baptismal priesthood, while we forgot it."

"We defended the ministerial priesthood, which is a key element of the church," he said, while acknowledging it has helped contribute to a clerical mentality. He believes the Second Vatican Council, with its focus on all of the people of God, has helped "reconcile" that divide.

Yet Ouellet admitted that in the eyes of most of the world, the all-male, celibate Catholic priesthood is a tough proposal. But it's one he is standing by.

His 2019 book, Friends of the Bridegroom: For a Renewed Vision of Priestly Celibacy, which explored the global priest shortage and the challenges of the clergy abuse scandals, also made the case for the church sticking with the discipline of celibacy.

Following its publication, the cardinal said a group of about a dozen men and women theologians began meeting to plan this week's symposium on the priesthood, which he said has the full backing of Francis.

Ouellet told NCR the priesthood is "more countercultural as ever" for two reasons: First, a priest's entire existence in the world is defined by his faith, something Ouellet said presents challenges in a secularized world where faith is increasingly privatized.

Secondly, celibate individuals are viewed by much of the world as "not fully human."

While there will always be those who are "suspicious," the cardinal said the choice of celibacy is "a way of affirming who is Jesus."

In a postmodern age, he conceded that is a difficult case to make, but said if a priest is truly living his vocation, it becomes attractive to others, and that, he believes, is what evangelization is all about. 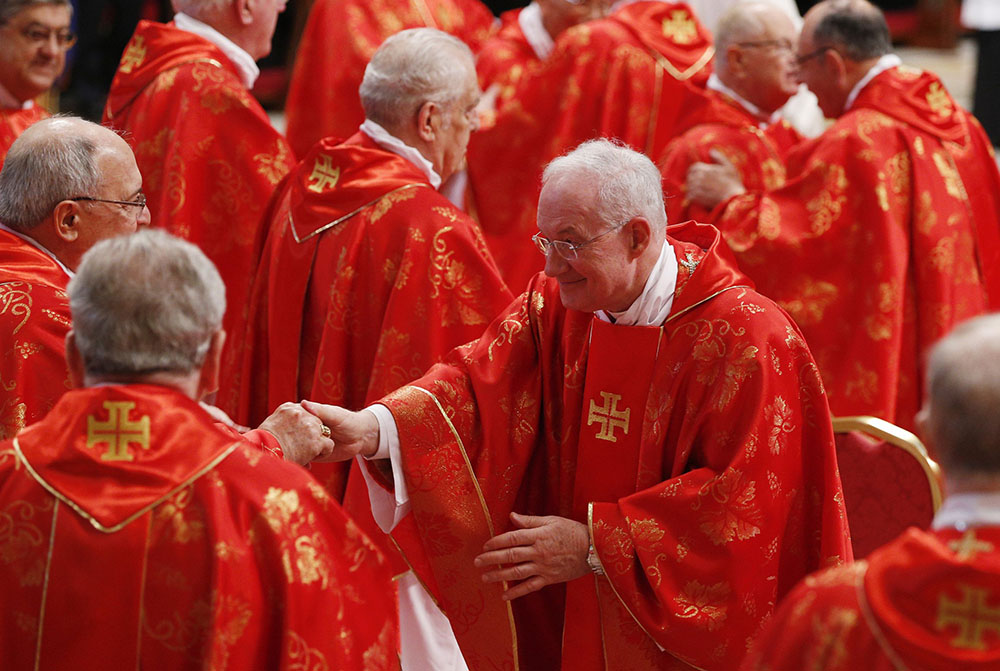 Cardinal Marc Ouellet exchanges a sign of peace with fellow cardinals during the Mass for the election of the Roman pontiff in St. Peter's Basilica at the Vatican March 12, 2013. (CNS/Paul Haring)

While it may be what evangelization is all about, Ouellet admits that among the priesthood's greatest challenges in recent years has been the self-inflicted wound of the clergy abuse scandals that have roiled the church worldwide.

The church, said Ouellet, must "do penance" to acknowledge its mistakes in the way it has confronted sex abuse and its cover-up, and part of the acknowledgment means "reshaping" the way priests are formed.

In previous decades and even centuries, he said, priests were formed in "isolation" as "a sort a group apart" from everyone else. While the cardinal believes this had the upside of creating a strong sense of fraternity, he said changes are in order.

Priests, he believes, must develop a greater relational capacity, including with women and families, in order to enter into the "fullness of pastoral life."

"If someone does not possess a healthy relational capacity,'' he said, "that somebody is not adequate for ministry." 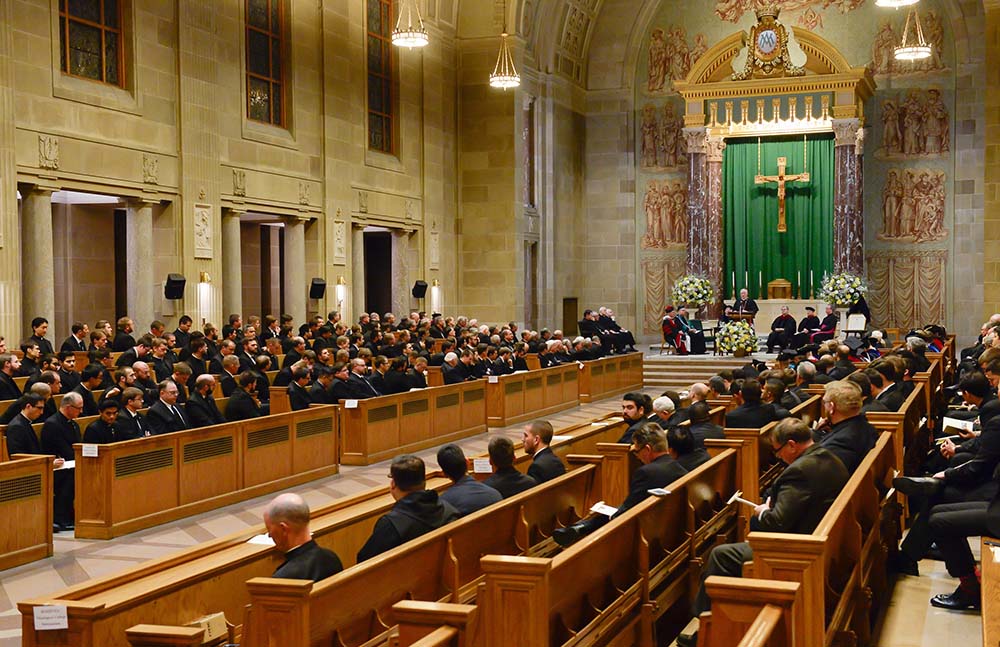 The timing of the priesthood symposium comes amid another major inflection point in the global Catholic Church: a newly revamped synod process that was launched last October in an effort to create a more participatory, listening church.

Since its launch, organizers of the Vatican's office of the Synod of Bishops have sought to facilitate greater inclusion of the church's lay members. In November, Ouellet attended the Ecclesial Assembly of Latin America and the Caribbean, which helped jumpstart the global synod and spotlighted the elevated role of Catholic laity.

Ouellet said he doesn't see the priesthood symposium in conflict with the synodal focus of the church, saying that at this moment, the role of the priest is "to really listen."

He cautioned against the "fatigue" some priests may express at participating in the process, noting that he has witnessed much enthusiasm, which he believes can help renew the whole church, the priesthood included.

As someone known for more traditional theology, when asked about the Synodal Path currently taking place in Germany — where more than two-thirds of all delegates voted in support of women deacons and voiced a desire for a change in the church's understanding of homosexuality — the cardinal said that Francis reiterated that the synod is not a parliamentary process. 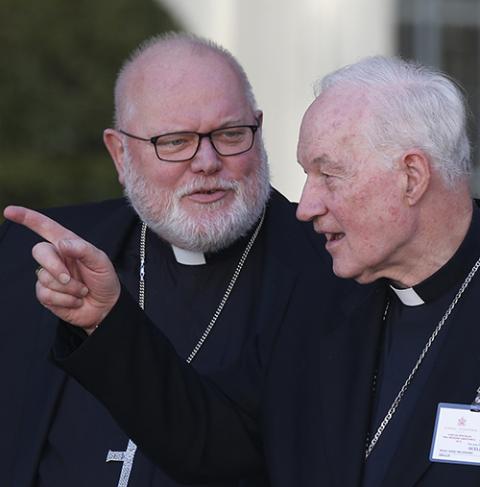 Cardinal Reinhard Marx of Munich and Freising, Germany, and Cardinal Marc Ouellet talk as they leave a session of the Synod of Bishops for the Amazon at the Vatican Oct. 21, 2019. (CNS/Paul Haring)

"This will be a delicate operation, not to be a sort of distorted by ideologies," he said. The cardinal said that in considering Germany's synodal path, Australia's plenary council and other such initiatives, at this point the church must wait "to the end of the process to what extent [such proposals] are acceptable for the universal church."

There are many unknowns, he said, but added that overall he believes the global synodal process is a sign of "hope" and "renewal."

Yet many of the synod's fiercest critics can be found in the United States and in the English-speaking world, often tied with a resistance to Francis and his priorities. In December, Boston Cardinal Sean O'Malley said in an interview that this was particularly acute among "young conservative clergy" who often hold distorted views of Francis due to the influence of social media.

While noting that he did not want to address the specifics of the situation in the U.S. church, Ouellet said that a priest must always be exercising his priesthood "in communion with" and "under Peter."

"Maybe they are not happy because he is not on their right political side," Ouellet surmised. "But their criteria is their politics. What we have to look for with the pope is his missionary spirit."

"I would invite the young clergy to look at the pope as an example," the cardinal continued. "A priest should be working in communion with the pope, otherwise he should ask himself, 'What am I doing here?' "

A version of this story appeared in the March 4-17, 2022 print issue under the headline: Cardinal Ouellet: Priests should be supporting Pope Francis.