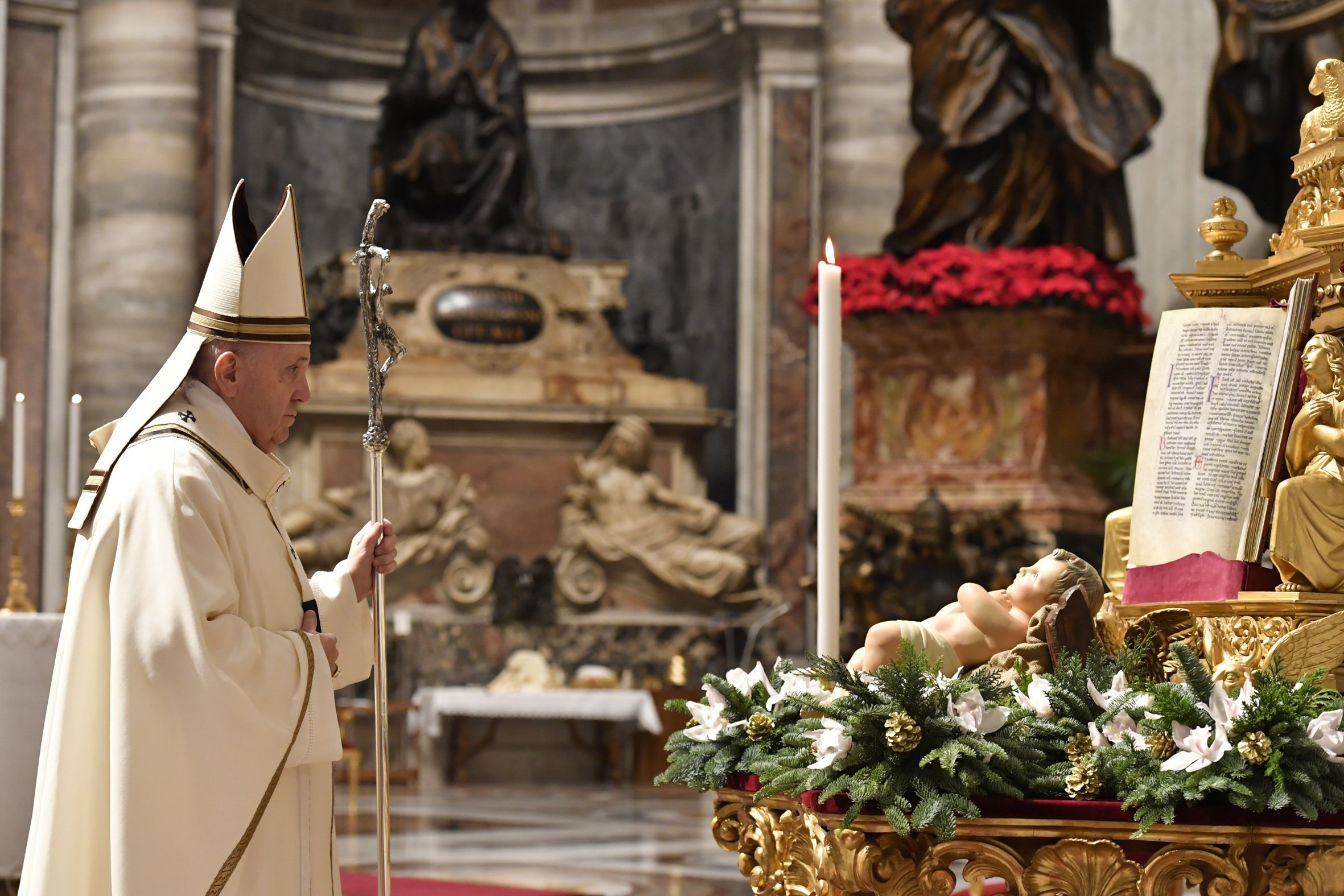 Pope Francis looks at a figurine of the baby Jesus as he celebrates Christmas Eve Mass in St. Peter's Basilica at the Vatican in this Dec. 24, 2020, file photo. (CNS photo/Vatican Media)

ROME — Pope Francis has approved further clarifications regarding restrictions on the traditional Latin Mass in an effort to ensure that liturgical reform is "irreversible" and that liturgical celebrations adhere to the changes made after the Second Vatican Council.

The clarifications, published Dec. 18, ban priestly ordinations and confirmations in the old rite and limit the frequency in which priests who receive a dispensation to celebrate the traditional Latin Mass can do so.

The Vatican's Congregation for Divine Worship and the Discipline of the Sacraments released the responses to 11 questions (or dubia) prompted by Francis' July 16 decree, Traditionis Custodes, which limited the use of the traditional Latin Mass.

The responses, which are addressed to the presidents of Catholic bishops' conferences around the world, were approved by the pope during a meeting with the head of the Vatican's liturgy office, Archbishop Arthur Roche, on Nov. 18.

Roche, in an introduction to the new text, said that each norm has the "sole purpose of preserving the gift of ecclesial communion" with the pope.

In explaining his original decision to reimpose restrictions on the traditional Latin Mass earlier this year, Francis lamented that it had become a source of division in the church.

Since then, the decree has become a lightning rod for a vocal minority group of Catholics who still favor the traditional Latin Mass, many of whom also have expressed skepticism or even outright rejection of the reforms of Vatican II and of the legitimacy of Francis.

In an interview last month, Roche said that after years of trying to offer concessions, such as through the continued use of the old Mass, those efforts have "not entirely been successful" and it is time to "go back" to the principles of the Second Vatican Council.

He reiterated that message in his introduction to the new responses, saying that he was saddened that participation in Mass, and in particular, Holy Communion, has become "a cause for division."

"It is the duty of the Bishops," he added, "to safeguard communion."

The new guidelines enact an outright ban on priestly ordinations and confirmations according to the old rite, although they provide an exception for parishes where only the traditional Latin Mass is celebrated and allow for the celebration of baptism, confession and marriage under the old rite.

The new guidelines also explain that if a priest has received the dispensation to celebrate the traditional Latin Mass but does not accept the "validity and legitimacy" of the concelebration of Mass, especially at the Chrism Mass (where all of the priests gather to concelebrate together with the bishop), then the concession must be revoked.

In his July decree, Francis also said that approved groups who use the traditional Latin Mass can no longer use regular parishes for their Masses and that instead, bishops must find an alternate location for them.

The new guidelines allow for the bishop to approve use of a parish church if another location is "impossible," but state that the decision must be made "with the utmost care" and that the celebration of the traditional Latin Mass cannot be listed in the parish's Mass schedule "since it is attended only by the faithful who are members of the said group."

In addition, it notes that the Mass cannot take place at the same time as other "pastoral activities" taking place at the parish.

Further, the responses clarify that priests who receive the dispensation to celebrate the traditional Latin Mass are only allowed to do so at one Mass per day and that deacons and instituted ministers participating in such celebrations must be authorized by the diocesan bishop.

The document also states that if a diocesan bishop is to grant permission to priests ordained after the publication of Traditionis Custodes, that the bishop must first be authorized by the Holy See to do so.

In concluding his introduction to the newly published liturgy clarifications, Roche said that pastors "must not lend ourselves to sterile polemics, capable only of creating division, in which the ritual itself is often exploited by ideological viewpoints."

"We are all called to rediscover the value of the liturgical reform by preserving the truth and beauty of the Rite that it has given us," he continued. "For this to happen, we are aware that a renewed and continuous liturgical formation is necessary both for Priests and for the lay faithful."

A version of this story appeared in the Jan 7-20, 2022 print issue under the headline: Francis further restricts the Latin Mass.