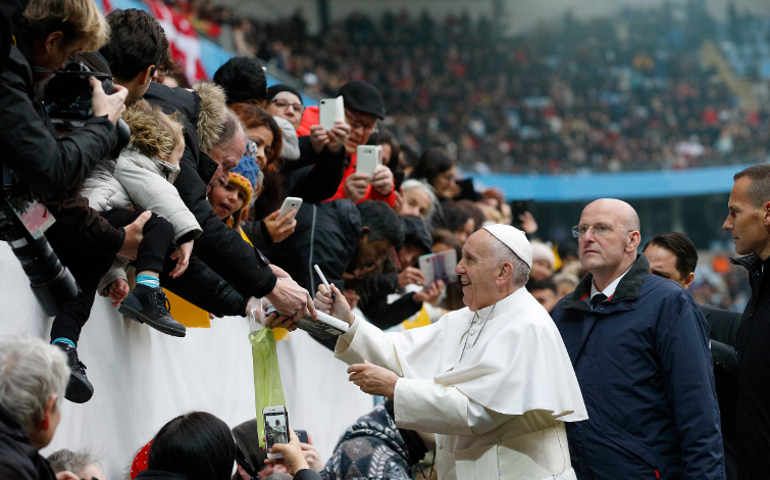 Pope Francis on a recent trip to Sweden. (CNS/Paul Haring)

Vatican City -- Pope Francis is firing back at foes of his efforts to make the Catholic church more open and pastoral in its ministry, telling an interviewer that “they are acting in bad faith to foment divisions.”

The pontiff’s lengthy interview in Avvenire, the official newspaper of the Italian hierarchy, was published Friday and followed days of news coverage of demands by four hard-line cardinals who have grave concerns about Francis’ approach.

The four say that focusing on ministering to people in their particular circumstances is eroding the church’s doctrinal absolutes and that Francis must dispel any ambiguities or face serious consequences.

The four critics, led by U.S. Cardinal Raymond Burke, a Rome-based prelate and longtime opponent of the pontiff’s policies, had written privately to Francis in September.

They asked the pontiff to state whether passages in a landmark document on ministering to families that he had issued in April could be interpreted to allow divorced and remarried Catholics to receive Communion in some cases.

On Monday, the cardinals went public with the letter because they learned that Francis was not going to respond to their demands that he answer five specific questions about the document, an exhortation called Amoris Laetitia, or “The Joy of Love."

The cardinals said he had to answer their questions in order to clear up their doubts about whether the document undermined the church’s teaching on sin and the permanence of marriage.

Then in an interview published Tuesday in the National Catholic Register, Burke raised the stakes by saying that if Francis did not offer a clarification, the next step would be to make “a formal act of correction of a serious error" — a phrase that some believe is tantamount to accusing the pope of heresy.

Avvenire’s interview with Francis focused largely on ecumenism and Catholicism’s relations with other churches.

But the pope also took the opportunity to push back against his critics — he did not name them — who view the faith through the lens of “a certain legalism, which can be ideological."

“Some people — I am thinking of certain responses to Amoris Laetitia — continue to misunderstand," Francis said. “It’s either black or white [to them], even if in the flow of life you have to discern."

Asked about critics who accuse the pope of “Protestantizing" the Catholic church — an objection often raised by conservative Catholics in the U.S. — Francis said, “I don’t lose sleep over it."

He insisted that he is following the model of the Second Vatican Council of the 1960s that set the church on a path to internal reform and greater engagement with the world.

“As for opinions of others," he said, “we always have to distinguish the spirit in which they are given. When not given in bad faith, they help with the way forward. Other times you see right away that the critics pick bits from here and there to justify a pre-existing viewpoint; they are not honest, they are acting in bad faith to foment divisions."

“You see right away that a certain ‘rigorism’ is born out of a lack of something, from a desire to hide inside the armor of one’s own sad dissatisfaction," he said.

The papal document Amoris Laetitia was Francis’ summation of two extraordinary Vatican meetings of the world’s bishops, held in 2014 and 2015, that sought to reorient the church’s approach away from a focus on doctrinal formulations and the reiteration of rules and toward accompanying people in difficult or unusual circumstances.

But the document has become a flashpoint for an increasingly open struggle between old guard hard-liners and supporters of Francis.

One of the three American prelates that Francis is to elevate to the rank of cardinal on Saturday — along with 14 other churchmen — pushed back against Burke’s campaign in unusually strong language, calling the effort “troublesome."

Cardinal-designate Joseph Tobin, who is going to head the Archdiocese of Newark, told The Tablet of London that Amoris Laetitia cannot simply be reduced to a question of ‘yes or no’ in a specific pastoral situation."

He said that the challenge by the four cardinals “is at best naive."

Vatican City -- The church is not a prop for one’s ego, a soapbox for ideas or a suit of armor protecting a sad life, Pope Francis said.

“The church exists only as an instrument for communicating God’s merciful plan to the people,” he said in an interview published in the Nov. 18 edition of Avvenire, an Italian Catholic newspaper.

God doesn’t ask for grand gestures, just for the trustful abandon of a child in a father’s arms and for sharing that divine love and mercy with others, he said.

“Those who discover they are loved very much begin to emerge from terrible solitude, from the separation that leads to hating others and oneself,” he added.

While most of the lengthy interview’s questions touched on ecumenism and the meaning of the Year of Mercy, the pope’s responses revealed his vision of the church and the “bad spirit” or psychological defects that foster division.

For example, he said, some reactions to his apostolic exhortation, Amoris Laetitia, continue to reflect a lack of understanding about how the Holy Spirit has been working in the church since the Second Vatican Council.

With Lumen Gentium, its dogmatic constitution on the church, he said, the church “returned to the source of her nature -- the Gospel. This shifted the axis of Christian understanding from a kind of legalism, which can be ideological, to the person of God, who became mercy in the incarnation of the son.”

“Think about certain reactions to Amoris Laetitia -- some continue to not understand, (seeing) either white or black, even if it is in the flow of life that one must discern.”

Historians, however, say it takes a century for a council’s teachings to fully sink in, which means “we are at the halfway mark,” Francis said.

The church and its members are asked to be docile to the Holy Spirit, he said, and to let the Spirit do the work because the Spirit knows when “the time is ripe” for things.

Calling the Year of Mercy was an example of that, he said. It was not “a plan” of his own, but something inspired by the Spirit and built on the cornerstones of his predecessors.

“The church is the Gospel, it is the work of Jesus Christ,” the pope said. “It is not a course of ideas, a tool for asserting them.”

“The cancer in the church is giving glory to one another,” he said in response to an observation made by Orthodox Ecumenical Patriarch Bartholomew of Constantinople, who said a worldly mentality within the church was at the root of divisions among Christians.

Someone who has never heard of or encountered Christ can always come to know him someday, Francis said.

But, he said, if someone is already “in the church and moves within it because precisely in the world of the church they cultivate and feed their hunger for domination and self-affirmation, [then] they have a spiritual disease; they believe the church is a self-sufficient human reality where everything proceeds according to the logic of ambition and power.”

There is a “sinful habit of the church to look too much at itself as if it believed it had its own light” -- what Bartholomew called an “ecclesial introversion,” the pope said. Divisions are born when the church looks too much too itself and not to the real light of Christ, which the church reflects like the moon does sunlight.

“Looking at Christ frees us from this habit and also from the temptation of triumphalism and rigidity,” the pope said.

The guide for knowing the right path to take is always understanding the importance of following the Holy Spirit, he said when asked about criticisms that his outreach to other Christian communities was a sign of “selling out” Catholic doctrine or “Protestant-izing” the church.

He said he doesn’t “lose sleep” over such critiques because it’s important to see what kind of “spirit” is motivating such opinions.

“When there is no bad spirit” behind the remarks, differing opinions can be helpful for walking the way of the Lord, he said.

Other times, it is immediately obvious when criticism is driven by wanting to “justify a position that’s already been taken,” he said. Such criticisms “are not honest, they are made with a bad spirit to foment division.”

One sees right away that certain forms of strictness “arise from a shortcoming, from the desire to hide one’s own sad discontent within a suit of armor,” he said, adding that the film Babette’s Feast offered a good example of “this rigid behavior.”

As long as the church and its members keep their focus on Christ, they will avoid many of these errors and temptations, he said.

It is walking behind Christ and doing his will by praying together, helping the needy and dying as martyrs together that will unite all Christians who already share the same baptism.

Ecumenism is a process, a walking together, not carving out or “occupying spaces,” or setting aside and ignoring theological differences, he said.

The “grave sin” of proselytism, too, goes against the “dynamic” of authentically becoming and being Christian. “The church is not a soccer team seeking fans,” he said.