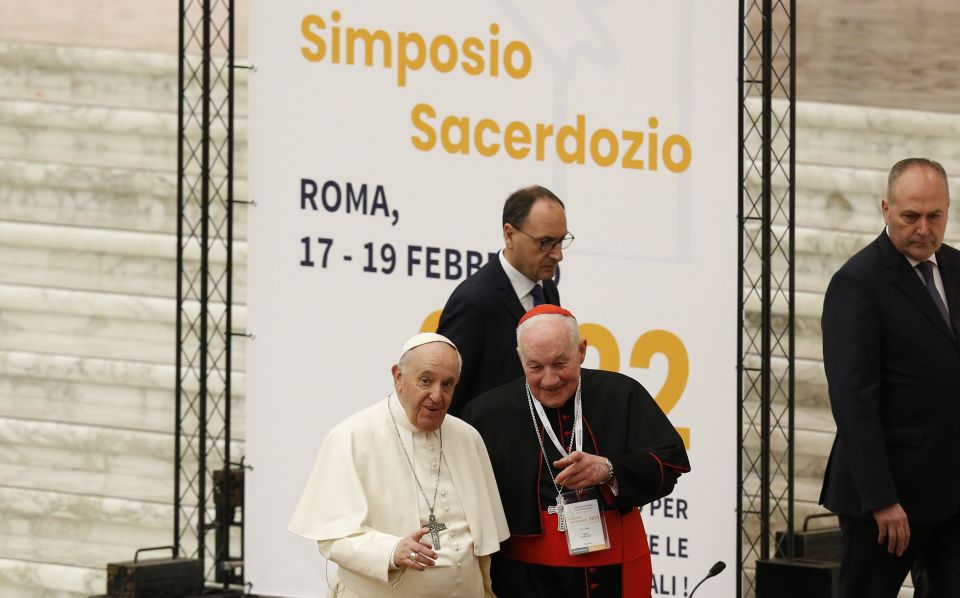 Pope Francis is pictured with Cardinal Marc Ouellet, prefect of the Congregation for Bishops, as he arrives to open an international symposium on priesthood at the Vatican Feb. 17, 2022. (CNS photo/Paul Haring)

ROME — Pope Francis on Feb. 17 kicked off a much anticipated three-day Vatican conference on the future of the Catholic priesthood by upholding clerical celibacy as a "gift" that should be lived out through "healthy relationships."

"Celibacy is a gift that the Latin Church preserves, yet it is a gift that, to be lived as a means of sanctification, calls for healthy relationships, relationships of true esteem and true goodness that are deeply rooted in Christ," Francis told some 400 Catholic bishops, priests and theologians attending the Feb. 17-19 conference in Rome.

The pope's remarks come at a time when some leading European bishops have signaled their willingness to relax the church's celibacy requirements for priests.

"I would also add that when priestly fraternity thrives and bonds of true friendship exist, it likewise becomes possible to experience with greater serenity the life of celibacy," said the pope. "Without friends and without prayer, celibacy can become an unbearable burden and a counter-witness to the very beauty of the priesthood."

Plans for the conference, organized by Canadian Cardinal Marc Ouellet, who heads the Vatican's Congregation for Bishops, have been underway for several years and are inspired, in part, by Ouellet's 2019 book, Friends of the Bridegroom: For a Renewed Vision of Priestly Celibacy.

The book was released ahead of the Vatican's 2019 synod on the nine-nation Amazon region, which among other proposals, considered the ordination of married men to minister in the remote region. Despite more than two-thirds of the synod's members voting in favor of the proposal, Francis has declined to respond to it directly, instead creating a special body tasked with implementing its proposals.

The pope has previously said he is not in favor of completely abandoning the church's discipline of celibacy, but would be open to allowing older married men to be ordained to the priesthood where there is a "pastoral necessity."

Yet despite touching on the sometimes-controversial issue of the all-male, celibate priesthood, the pope's nearly hour-long Feb. 17 address steered away from hot-button theological issues and instead focused on his desire for priests to be pastors who model God's "compassion and tender love."

Francis structured his remarks on what he described as the "four forms of closeness" that should define the attitudes and lifestyles of priests: a closeness to God, the bishop, other priests and to people.

The 85-year-old pope said his reflections may be the "'swan song' of my own priestly life."

"Closeness with God enables the priest to touch the hurt in our hearts, which, if embraced, disarms us even to the point of making possible an encounter," the pope said.

In order to maintain this closeness with God, Francis said it was necessary for priests to have an intimate prayer life, regularly celebrate the Eucharist, participate in Adoration and to participate in and offer confessions.

"Without these 'forms of closeness,' a priest is merely a weary hireling who has none of the benefits of the Lord’s friends," he said.

In exploring the proper relationship between a priest and his bishop, the pope said it was necessary for the priest to accept a bishops' authority and for bishops to sincerely listen to concerns raised by priests.

"Obedience can also be discussion, attentive listening and in some cases tension. This necessarily demands that priests pray for their bishops and feel free to express their opinions with respect and sincerity," he said. "It likewise demands that bishops demonstrate humility, an ability to listen, to be self-critical, and to let themselves be helped."

Francis went on to say that for priests to have healthy relationships with one another, they must avoid gossip, envy and other pretenses, but instead, treat one another as brothers.

"If there is one thing a priest can boast about, it is the Lord’s mercy," the pope said. "Conscious of his own sinfulness, weakness and limitations, he [the priest] knows from experience that where sin abounds, grace abounds all the more."

But the pope's strongest words were saved for his reflections on how priests are to relate to other people.

As he has done on numerous occasions, the pope railed against clericalism, describing it as "a distortion" of the priesthood, "because it is based not on closeness but on distance."

In opening the conference, Ouellet said that part of his motivation for organizing it was to help "unveil" the roots of clericalism.

"This term is a generic and concrete word at the same time, describing a set of phenomena: abuses of power, spiritual abuses, abuses of conscience, of which sexual abuses are but the tip of the iceberg, visible and perverse, emerging from deeper deviations to be identified and unmasked," said the cardinal.

Ouellet said the priesthood symposium was an occasion "to express our sincere regret and to ask forgiveness again of the victims, who suffer their lives destroyed by abusive and criminal behavior, which has remained hidden for too long and treated lightly, out of a desire to protect the institution and the perpetrators instead of the victims."

"This symposium takes note of the outcry and anger of God's people," he added, saying he hopes the three-day event helps to bring about new vocations to the priesthood and provides a forum to discuss ways in which women can participate more in church life.
Despite the clergy abuse scandals of recent decades looming over the Catholic priesthood, Francis did not address the topic directly, but said the priesthood must be "renewed."

"For a renewed understanding of the identity of the priesthood, it is important nowadays to be closely involved in people’s real lives, to live alongside them, without escape routes," he said.

“Sometimes we are tempted to be that kind of Christian who keeps the Lord’s wounds at arm’s length. Yet Jesus wants us to touch human misery, to touch the suffering flesh of others," he continued. "He hopes that we will stop looking for those personal or communal niches which shelter us from the maelstrom of human misfortune and instead enter into the reality of other people’s lives and know the power of tenderness."

While acknowledging that the world is in a time of "epochal change," Francis said the priesthood cannot be focused on the past or rushing too far ahead in the future, but instead should be anchored by a closeness to God and other people.

Only this, said Francis, will help "rekindle" a priest's "missionary zeal."

Editor's Note: This story was updated after initial publication to include additional comments from the first session of the symposium.

A version of this story appeared in the March 4-17, 2022 print issue under the headline: Francis: Celibacy is a 'gift' .

Pretrial hearing is held in McCarrick case; second hearing will be Dec. 21