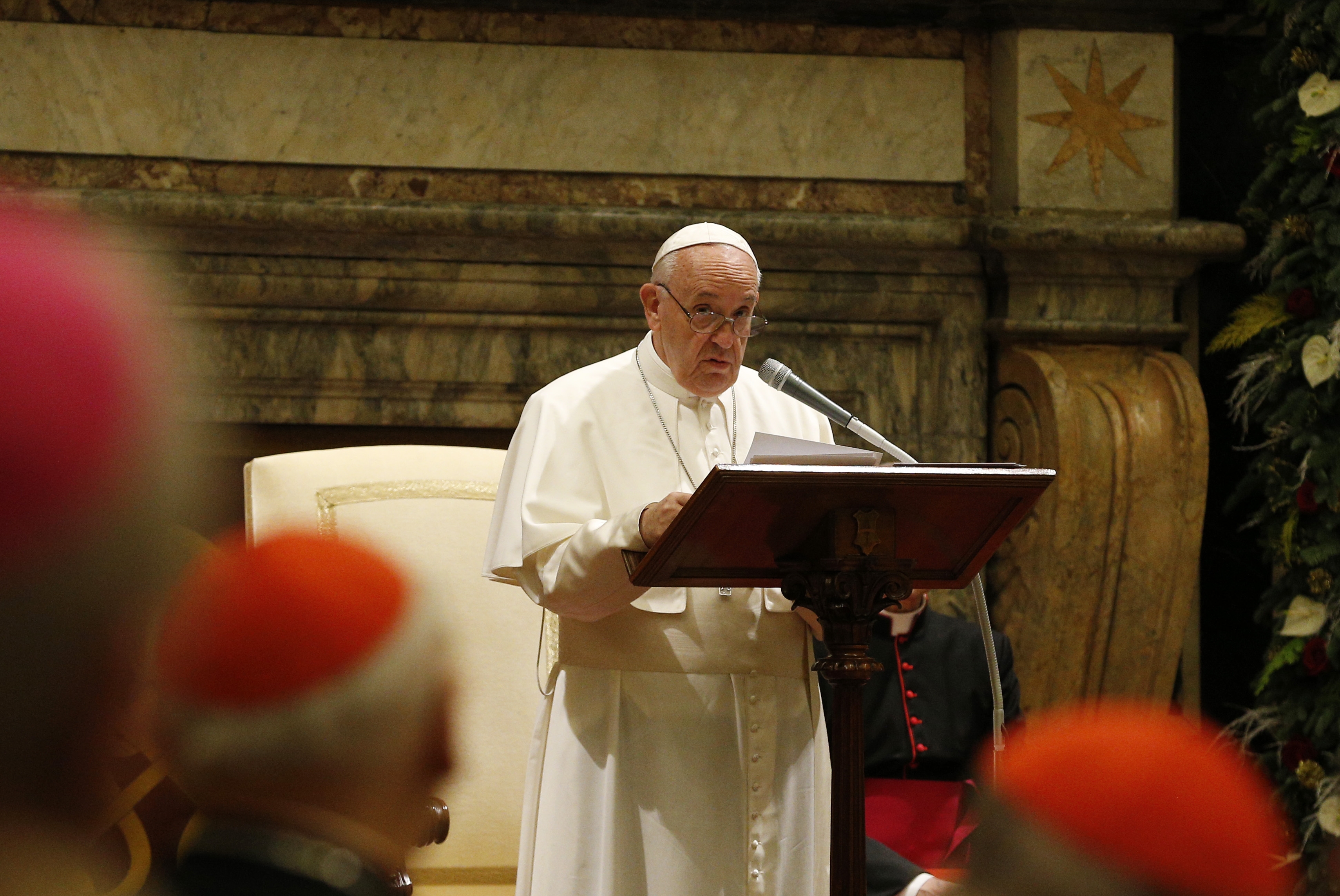 Pope Francis speaks as he leads his annual audience to give Christmas greetings to members of the Roman Curia at the Vatican Dec. 21, 2019. (CNS photo/Paul Haring)

ROME — Pope Francis on Dec. 23 told members of the Vatican bureaucracy that their work should be guided by humility and service, not a "spiritual worldliness" masked by liturgy, doctrine and religious devotion.

In his annual pre-Christmas address to a room full of men often dubbed as "princes of the church," the pope told the cardinals and bishops who work in the Vatican that it was time to "discard the trappings of our roles, our social recognition and the glitter of this world" and to adopt humility.

In past years, Francis has not hesitated to use his annual speech to lash out at Vatican officials for blocking his reform efforts and to criticize the spiritual "diseases" that he believes hamper their work. In this year's address, however, the pope took on a more pastoral tone, offering a reflection on the Old Testament figure of Naaman, an accomplished military commander who had leprosy.

"His armor that had won him renown, in reality covered a frail, wounded and diseased humanity," said Francis. "Sometimes great gifts are the armor that covers great frailties. Naaman came to understand a fundamental truth: we cannot spend our lives hiding behind armor, a role we play, or social recognition."

Christmas, Francis said during the 45-minute address, is a time to "find the courage to take off our armor."

"Once we strip ourselves of our robes, prerogatives, positions and titles, all of us are lepers in need of healing," he said.

The pope went on to criticize those who rely on their titles to hold on to a "modicum of power," rather than engaging in sacrifice and service for the "real lives and difficulties of our people."

The two-year process will include an unprecedented consultation phase with local churches, with an ambitious goal of providing every single Catholic — and even those outside the church — an opportunity to participate.

The synod, Francis told Vatican officials, "is the experience of feeling ourselves all members of a larger people." Listening to everyone in the church, he said, provides the opportunity to "understand God’s will, which is always revealed in unpredictable ways."

In addressing the high-ranking prelates, Francis said that the "temptation" of clericalism must be avoided, as it "makes us keep thinking of a God who speaks only to some, while the others must only listen and obey." Instead, he pleaded for a conversion to synodality, which he described as a "style" oriented toward service of the entire church.

"Authority becomes service when it shares, involves and helps people to grow," Francis said. "The curia is not merely a logistical and bureaucratic instrument for meeting the needs of the universal church, but the first body called to bear witness."

The pope also used his year-end address to double-down on his call for poverty in order to offer a more credible witness to the Gospel.

In March, due to budget shortfalls stemming from the COVID-19 pandemic, Francis approved pay cuts for a number of curial officials, including a ten-percent pay reduction for curial cardinals.

"If the word of God reminds the whole world of the value of poverty, we, the members of the Curia, must be the first to commit ourselves to being converted to a style of sobriety," he told curial officials on Thursday.

In concluding his address, the pope encouraged the church's prelates to embrace the "humility of the child Jesus."

"Only by serving, and by seeing our work as service, can we be truly helpful to everyone," he said. "We are here — I myself before anyone else — to learn how to kneel and adore the Lord in his humility, not other lords in their empty trappings."

At the end of his address, Francis greeted the cardinals and bishops present one-by-one and gave each three different books: Converting Peter Pan: The Fate of Faith in the Society of Eternal Youth by Italian priest Fr. Armando Matteo; The Discarded Stone: When the Forgotten are Saved by Italian priest Fr. Luigi Maria Epicoco; and The Abused Word by Nigerian Archbishop Fortunatus Nwachukwu.

Francis said the books, which discuss faith in the modern world and the dangers of gossip, are to be read — and not to be left on the shelf.

A version of this story appeared in the Jan 7-20, 2022 print issue under the headline: Pope Francis pleads with Curia to be humble.