Indictments for Vatican financial crimes a sign of progress 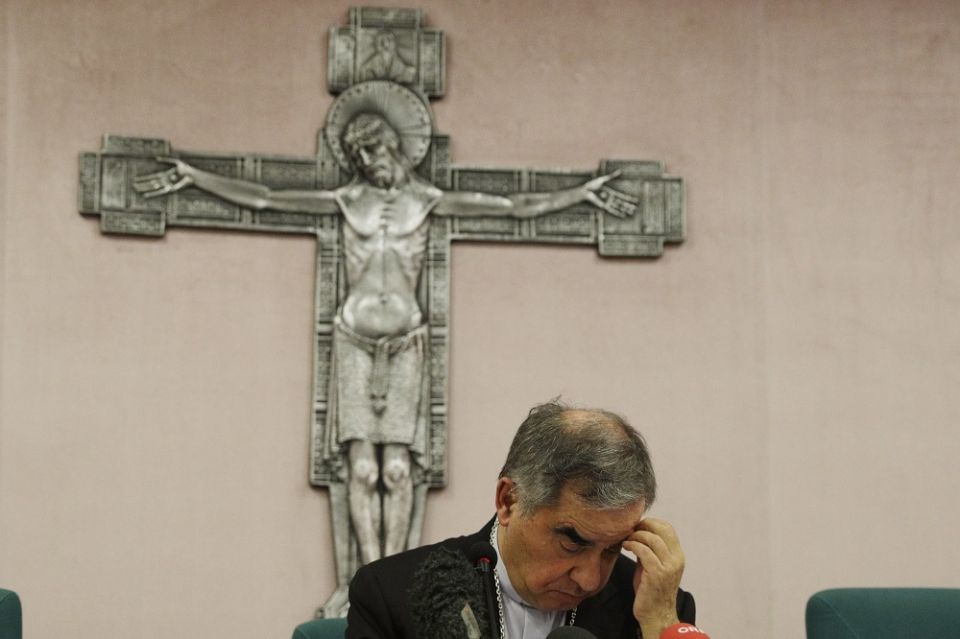 In this Sept. 25, 2020, file photo, Cardinal Angelo Becciu looks down as he meets the media during a news conference in Rome. The Vatican's criminal tribunal indicted 10 people July 3, 2021, including Becciu, and four companies on charges including extortion, abuse of office and fraud in connection with the secretariat of state's 350 million-euro investment in a London real estate venture. Becciu helped engineer the initial London investment when he was the chief of staff in the secretariat of state. (AP/Gregorio Borgia, File)

The Catholic faithful are rightly outraged by news of financial crimes in the Vatican, especially since the latest alleged crimes involve Peter's Pence, the collection for the pope's charities. But last week's announcement of indictments by Vatican prosecutors is not a scandal but a sign of progress.

Indicted by the Vatican are six former Vatican officials, including the cardinal who was behind a real estate investment in London involving hundreds of millions of dollars. Also indicted are Italian businessmen who worked with the Vatican on the investment, as well as a woman accused of buying luxury goods with Vatican funds intended for ransoming Catholic hostages.

For some years now, experts at Moneyval, the international agency dealing with money laundering, have complimented the Vatican on improvements in its laws and procedures, but they have wondered at the absence of prosecutions for financial crimes. In its most recent report, Moneyval warned the Vatican that it was still susceptible to money laundering and faced financial risks from "insiders."

Many presumed that the Vatican preferred to cover up these crimes when they involved cardinals and other clerics. Vatican officials feared the scandal would hurt the church's image and reduce giving. In addition, the accused were colleagues and friends.

In 2017, when two laymen were charged with diverting money from Bambino Gesu Hospital to finance the renovations of a cardinal's apartment, the cardinal was not indicted. He was not even called to testify at the laymen's trial. The occupant of the apartment was Cardinal Tarcisio Bertone, one of Pope Emeritus Benedict XVI's closest collaborators and a former secretary of state.

Nor did the Vatican have prosecutors or investigators competent to dig up the truth.

In March, a Vatican presentation to a British court was so poorly prepared that it was laughed out of court. The judge ruled that the Vatican request to seize the bank accounts of Gianluigi Torzi, the broker involved in its disastrous London real estate investment, was "appalling" and riddled with "non-disclosures and misrepresentations."

First, Pope Francis, two months ago, changed the rules so that cardinals can now be tried like anyone else in Vatican court with lay judges. Before that, only the pope could judge a cardinal. The pope has also mandated more financial transparency and the disclosure of conflicts of interest. For the first time in modern history, a cardinal and his secretary are being charged with financial crimes by the Vatican.

Nor is this just any cardinal; it is Cardinal Angelo Becciu, who had dreams of someday becoming pope. Prior to becoming a cardinal, he was sostituto (substitute) in the Vatican secretariat of state — technically a position just under the secretary of state, but in reality, the sostituto acts as chief of staff to the pope. It was as sostituto that Becciu orchestrated the Vatican's disastrous $400 million investment in London real estate in 2014.

Second, the pope beefed up the Vatican legal team dealing with financial crimes. In 2019, he appointed Giuseppe Pignatone, a former Italian prosecutor known for his anti-mafia efforts, to head the Vatican tribunal. He has been working with investigators from other countries to dig up the truth. The indictments announced last week are a result of his investigations.

The other good news in the current round of indictments is that this investigation does not involve the Vatican bank, which has been tarnished by major financial scandals in the past. The Vatican bank was cleaned up thanks to Benedict's insistence that it be subjected to review by Moneyval. This cost millions of dollars as forensic accountants combed through the bank's accounts.

In fact, it was the bank that first sounded the alarm over the London real estate deal when the secretariat of state tried to get a loan to cover its losses. For the bank to say "no" to the secretary of state, who is on its board, was an extraordinary act of financial responsibility and shows that the banking reforms are working. It is other parts of the Vatican that need to be cleaned up. 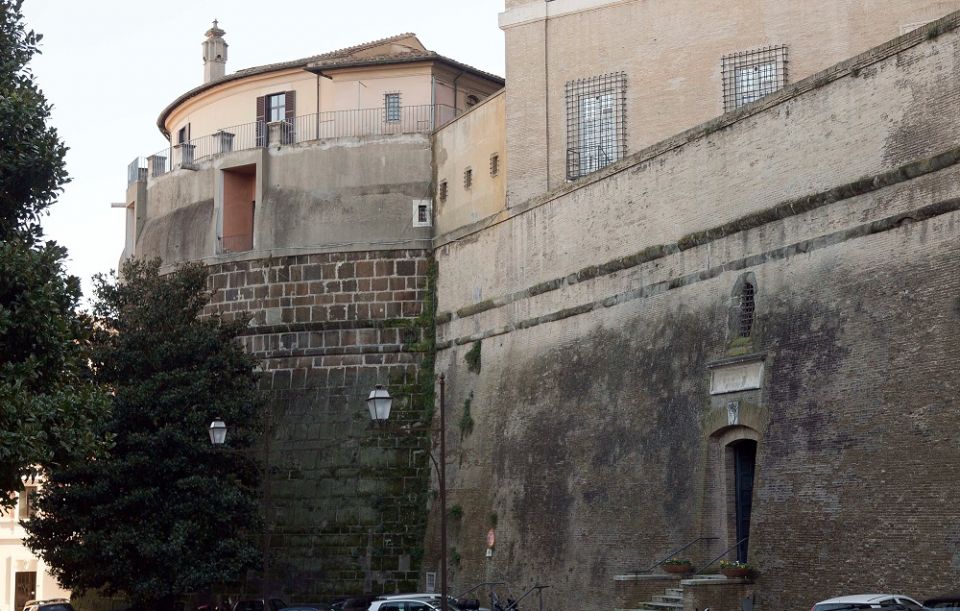 A 2014 file photo shows an exterior view of the offices of the Vatican bank IOR in Vatican City. The Vatican’s criminal tribunal on Thursday, Jan, 21, 2021 convicted the former head of the Vatican bank and his lawyer of embezzling some 57 million euros in proceeds from the sales of Holy See-owned real estate and sentenced them to nearly nine years in prison. (AP/Domenico Stinellis)

A preliminary hearing will be held July 27, but don't expect a quick trial. The Vatican, like Italy, is not known for speedy trials, especially with complex financial issues. Tons of paper will be submitted, and there will be long stretches between actual sessions of the court while judges review the documents.

The cardinal will undoubtedly say he is innocent and was tricked by the people with whom he was dealing. Those outside the Vatican who worked with the cardinal will argue that he knew and approved what they were doing, and if he did not understand the consequences, it's his fault, not theirs.

Will the prosecution be able to prove its case? That remains to be seen. Although the appointment of Pignatone is encouraging, remember that the "appalling" submission rejected by the British court was prepared after his appointment. That is not encouraging.

In addition, the most surprising indictment is that of René Brülhart, the former president of the Vatican's Financial Information Authority, who has an international reputation for integrity and competence. The evidence against him has to be overwhelming or his peers will conclude he was set up by enemies who opposed his efforts to investigate Vatican finances. This could undermine the credibility of the judicial process.

Finally, there are unanswered questions about the role of Cardinal Pietro Parolin, the secretary of state, in the scandal. It was his shop that made the investments and it was he who asked the Vatican bank for the loan. The Vatican says he had not been "effectively informed to be fully aware of the juridical effects that the different categories of actions would cause." At a minimum, he should testify at the trial, lest it look as if those closest to Francis are immune from prosecution while their subordinates take the fall.

There are three lessons from this fiasco.

First, papal leadership is needed to get Vatican finances under control. Most popes want be pastors and therefore delegate finances to others. This does not work.

Second, the church must put in place financial controls like those in any well-run nonprofit or business. The Vatican does not have to invent something new; policies and procedures already exist that the church can use.

Third, cleaning up Vatican finances costs money, as the reform of the Vatican bank showed. The Vatican is heavily criticized when it spends millions on outside accountants and lawyers, but doing so is cheaper in the long run. The credibility of Vatican financial managers is already diminished because they are not paid as well as their equivalents in the secular world. Some employees see "side deals" as ways to make up for low salaries.

There is more work to do. Numerous financial entities in the Vatican, including the city state, Propaganda Fide (the mission fund) and APSA, the Vatican investment and finance office, need to be examined. Real estate holdings in Rome and around the world need to be regularized, as do scores of contracts and purchases.

The Vatican bank has shown how to ferret out abuse and avoid scandals. Since Vatican finances are currently in the red, some big Catholic donors must go to the pope with a detailed plan and the money to clean up Vatican finances. Once the outside auditors arrive, the pope must make clear that anyone who obstructs their work will be fired.

Vatican financial scandals have repeatedly tarnished the image of the church. It is time for the Vatican to get its act together. Ironically, that will mean more bad news in the future as crimes and incompetencies are uncovered. But these should not be seen as scandals but good news.

Column | Indictments for Vatican financial crimes a sign of progress

Pope's quotes: Dwelling among us