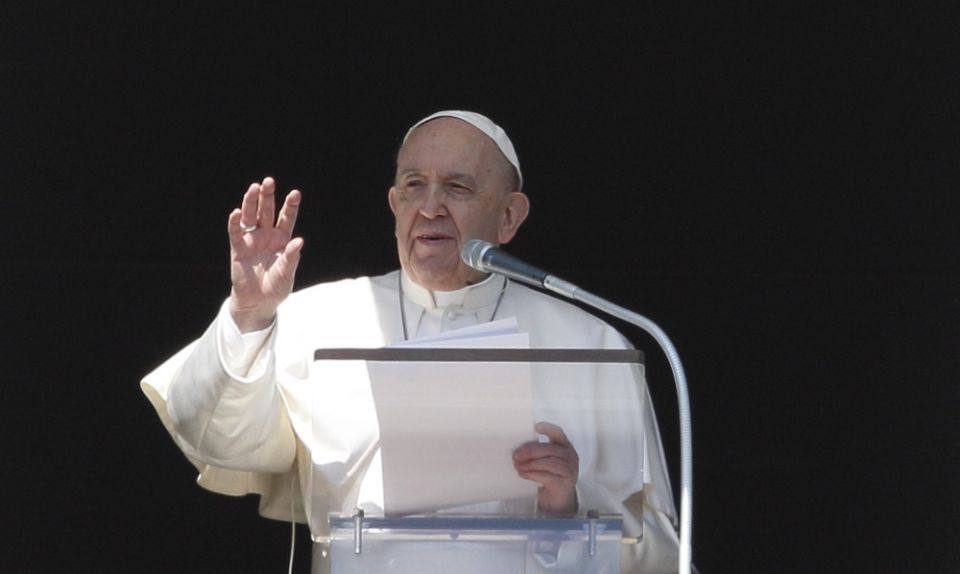 Pope Francis greets the crowd as he leads the Angelus from the window of his studio overlooking St. Peter's Square at the Vatican March 13, 2022. Appealing again for peace in Ukraine, Pope Francis said those who support violence profane the name of God. (CNS photo/Paul Haring)

Rome — The Vatican on March 14 sought to defend itself from criticism that Pope Francis has failed to directly condemn President Vladimir Putin and Russia as aggressors in the war in Ukraine and doubled down on the Vatican's long tradition of maintaining strict neutrality in wartime.

"As if the words of the pastor of the universal church should reflect the plans of a television news program outline," retorted a front page editorial in the Vatican's daily newspaper, L'Osservatore Romano.

Such criticism of the Vatican and Francis, the article maintained, is forgetful of the Vatican's historical stance of refusing to name the aggressor in armed conflicts.

This position, the editorial said, is derived "not out of cowardice or an excess of diplomatic prudence, but in order not to close the door, in order to always leave open a crack to the possibility of stopping the evil and saving human lives."

The article was penned by the editorial director for the Vatican's Dicastery for Communication, Andrea Tornielli, under the title "The voice of the Pope, crying out in the desert." The Vatican's newspaper, on March 4, has previously pointed the finger at Russia as the aggressor in an article headline that included the words: "Putin does not stop the offensive."

"Even St. John Paul II, born in a martyred nation like Poland, victim of Nazism and Communism, when there was a war in Kosovo in 1999, never named the authors of ethnic cleansing, always keeping a channel of contact open with Serbia," wrote Tornielli.

The 1,100 word editorial recalled that Francis has repeatedly warned of a third world war being waged "piecemeal" and that he has strongly condemned the arms trade. The editorial also noted that Francis has sent two cardinals into Ukraine as a physical expression of his closeness with those suffering from the violence of war.

"The successor of Peter does not have the problem of making known 'which side he is on,' because the Vicar of Christ, like his Lord, is always with the innocent who suffer as Jesus suffered on the cross," Tornielli wrote.

The Vatican's editorial comes after a flurry of criticism in recent articles over the pope's stance on the invasion, including an editorial from the National Catholic Reporter.

"Whatever is happening behind the scenes, it is time for Francis to speak the truth about the murderous assault on Ukraine," wrote the editors of NCR on March 10. "It is time to speak as clearly about Putin's warmongering as he has about the disastrous premises and consequences of neoliberalism. It is time to call things as they are. This is Putin's war and it is evil."

In recent weeks, Francis has ramped up his rhetoric against the war during his Sunday Angelus addresses in St. Peter's Square.

"This is not just a military operation but a war which sows death, destruction and misery," said Francis on March 6, a rejection of the Russian government's repeated descriptions of their military activities as a "special military operation."

In his editorial, Tornielli said that those words were an effort to evidence the "hypocrisy of the Russian government" and characterized the language of "special military operation" as "masking behind word games."

On March 13, Francis used even stronger language, referring to the "unacceptable armed aggression" that had devastated the Ukrainian city of Mariupol.

"Faced with the barbarism of the killing of children, and of innocent and defenseless citizens, there are no strategic reasons that hold up," the pope said.

In addition to his public statements, the pope has also made public gestures meant to register his concern against the war.

The day after Russia's invasion into Ukraine began, Francis took the extraordinary step of visiting Russia's embassy to the Vatican where he expressed his concern against the war. The Feb. 25 visit marked a strong break with diplomatic protocol where ambassadors are normally summoned to meet with heads of state.

On Feb. 26, Francis also spoke directly with Ukrainian President Volodymyr Zelensky, where the pope reportedly offered his spiritual support and expressed sorrow over the war.

Despite repeated offers from both Francis and the Vatican's secretary of state Cardinal Pietro Parolin, including a phone call with Russia's foreign minister, to help mediate a peace agreement, Russia's government has not sought such a recourse.