by Christopher White
Vatican
World
This article appears in the War in Ukraine feature series. View the full series. 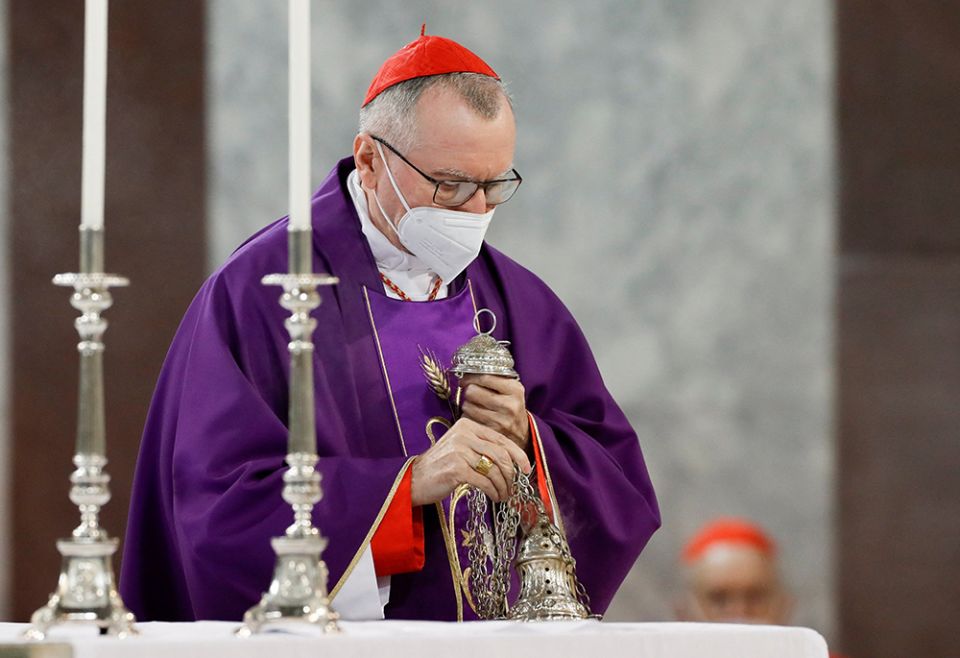 Cardinal Pietro Parolin, Vatican secretary of state, burns incense as he celebrates Ash Wednesday Mass at the Basilica of Santa Sabina March 2 in Rome. Parolin presided in place of Pope Francis, who was not able to attend because of knee pain. (CNS/Reuters/Remo Casilli)

Rome — As Ukraine endured its seventh day of Russia's invasion, the Vatican's top diplomat marked the start of the Lenten season on March 2 by offering prayers for "those who suffer and flee before the roar of weapons."

"Restore peace to our hearts; once again, grant your peace to our days," said Cardinal Pietro Parolin, the Vatican's secretary of state.

Parolin's words came during a Mass for Ash Wednesday at the fifth-century Basilica of Saint Sabina on Rome's Aventine Hill.

One week earlier — on the eve of Russia's invasion into Ukraine — Pope Francis announced that he was calling on all Catholics and believers to mark the start of Lent with a day of prayer and fasting for peace in Ukraine.

"Prayer, charity and fasting are the principal ways for God to intervene in our lives and in the world," Parolin told an estimated 300 attendees on hand for the Mass.

"They are weapons of the spirit and, with them, on this day of prayer and fasting for Ukraine, we implore from God that peace which men and women are incapable of building by themselves," said the Italian diplomat.

Parolin has previously said that the Vatican would be willing to mediate peace negotiations between Ukraine and Russia.

Francis was originally scheduled to celebrate the annual Mass, but on Feb. 25, the Vatican announced the 85-year-old pope would no longer preside over it due to acute knee pain and orders from his doctor to limit his activities.

Even so, earlier in the day on Wednesday, Francis participated in his weekly general audience at the Vatican. There, he paid tribute to Fr. Marek Viktor Gongalo, a Ukrainian friar who read the general audience summary in Polish. 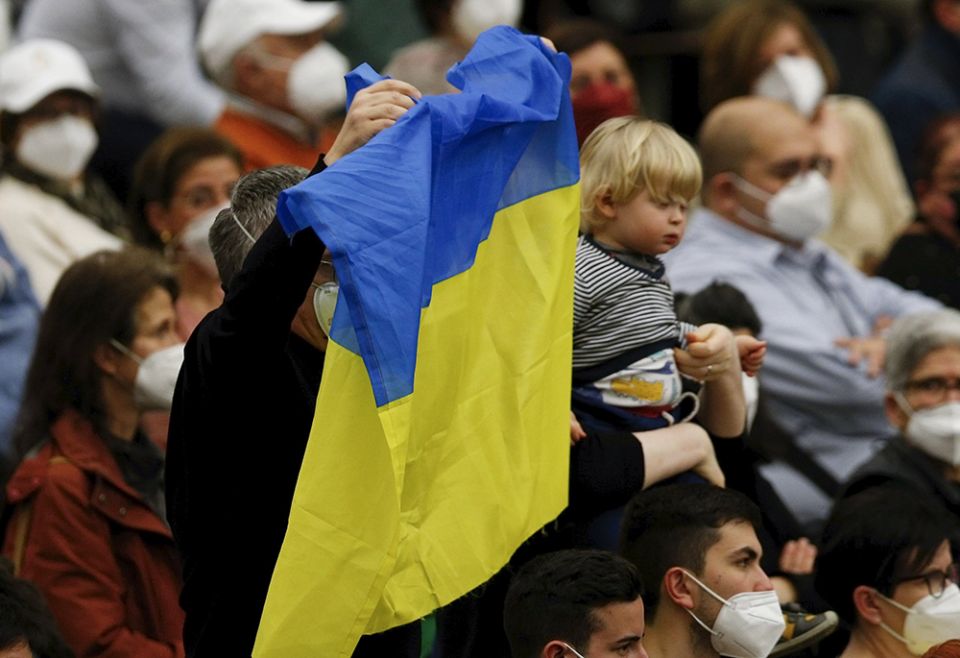 A man holds Ukraine's flag as Pope Francis leads his general audience in the Paul VI Hall March 2 at the Vatican. (CNS/Paul Haring)

"His parents right now are in an underground shelter to defend themselves from bombs, in a place close to Kyiv, and he continues to do his duty here with us," the pope told those gathered in the Vatican's Pope Paul VI audience Hall.

"By accompanying him, we accompany all of those who are undergoing bombardments and who are suffering, his elderly parents and many other elderly people who are underground to defend themselves," Francis said.

"We carry the memory of this people in our hearts and thank you for continuing in your work," the pope said.

Francis also offered his thanks to the Polish pilgrims in attendance at the Vatican, saying they were the first to support Ukraine by opening their hearts and homes to Ukrainians fleeing war.

"You are generously offering what is necessary for them to live in dignity," the pope said. "I am deeply grateful to you."

On Wednesday morning, the head of the Ukrainian Catholic Church released a video update on the status of the war.

"We are especially worried about Kharkiv, Sumy, Chernihiv, Kherson and other Ukrainian cities," said Archbishop Sviatoslav Shevchuk of Kyiv-Halych, "where there is already a great shortage of food and medicine, and it is difficult to save the local population."

The archbishop, who has remained in the Ukrainian capital of Kyiv, thanked everyone from around the world who were marking the day with prayer and fasting for the country.

"Only when we are united and unified," he said, "we will be strong and able to withstand this war."

Questions and answers about Ash Wednesday