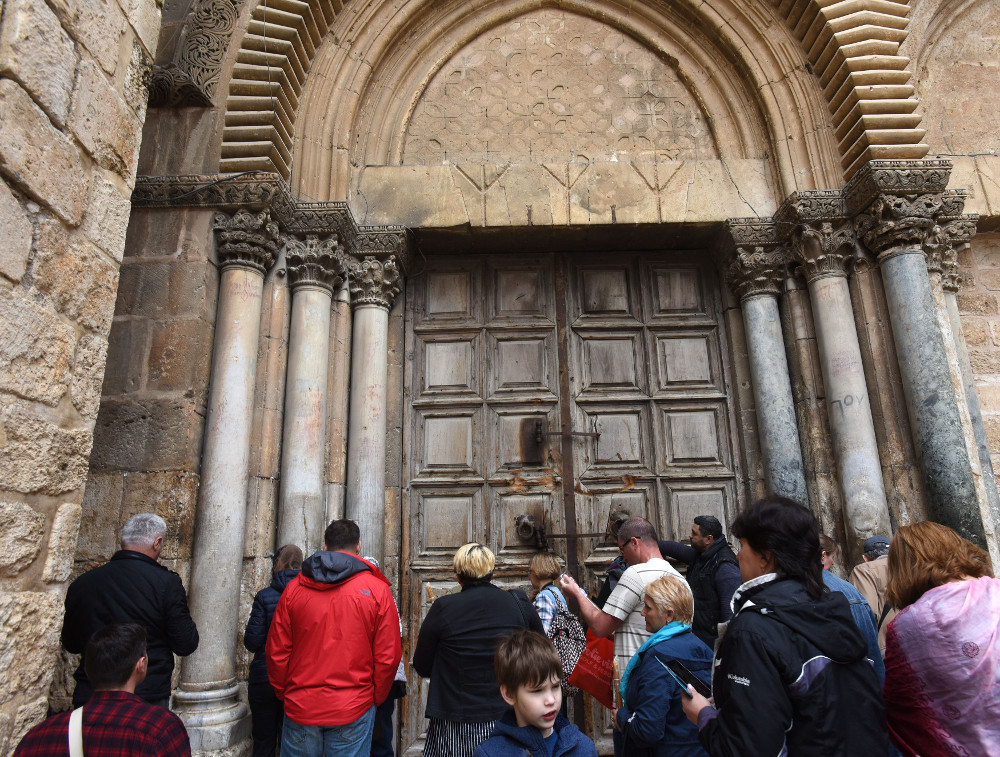 Tourists pray outside the locked doors of the Church of the Holy Sepulcher Feb. 26 in Jerusalem's Old City. Protesting several recent actions they described as a "systematic campaign against the churches and the Christian community in the Holy Land," the heads of Christian churches announced Feb. 25 they were closing of the doors of the church. (CNS/Debbie Hill)

JERUSALEM —​ Christian leaders in the Holy Land announced they would reopen the Church of the Holy Sepulcher Feb. 28 after the Israeli government has set up a negotiating team to resolve a municipal dispute over property taxes.

The heads of Christian churches expressed "our gratitude to all those who have worked tirelessly to uphold the Christian presence in Jerusalem and to defend the Status Quo," the 19th-century agreement that governs Jerusalem's holy places.

They said they looked forward to bargaining with the government committee "to ensure that our holy city, where our Christian presence continues to face challenges, remains a place where the three monotheistic faiths may live and thrive together."

The committee's formation was announced Feb. 27, two days after Christian leaders closed the doors of the Church of the Holy Sepulcher, built on the site where tradition holds that Jesus was buried. Church leaders sent out a brief press notice acknowledging they had received a statement from the prime minister's office concerning the crisis and said they were holding consultations.

The church remained closed for a third day as pilgrims continued to visit the square in front of the church, to pray, kneel and sing hymns.

Although the Church of the Holy Sepulcher was not being taxed, in early February the Jerusalem Municipality announced it would begin collecting $186.4 million in property taxes from some 887 church-owned properties that were not houses of prayer.

The Israel Hayom newspaper reported that the religious institution with the biggest tax bill was the Roman Catholic Church, owing more than $3.3 million.

Among the properties slated to be fined was the Vatican-owned Notre Dame of Jerusalem hotel, restaurant and conference center across from the Old City. The director of the complex declined to comment on the issue.

The Holy See and Israel have been in negotiations over the status of its Jerusalem holdings since 1993, when diplomatic relations were established.

The committee is also slated to look at the issue of Jerusalem land sales by the Greek Orthodox Church. Church leaders feared a bill in the Israeli parliament would allow for state expropriation of church land. Media reported that work on the bill was suspended until the committee could present its findings.

Earlier in February, some political commentators suggested that the threat to impose taxes on church property was a ploy by Jerusalem Mayor Nir Barkat to try to get more funding for his city from the Ministry of Finance. Prior to this crisis, he had urged municipal workers to go on strike, leaving the city buried in garbage in an attempt to get more funds.

Despite rumors, sources told Catholic News Service that church bank accounts had not been frozen, although at least the Greek Orthodox Church had received a notice that such actions could be taken.

The church leaders said taxing commercial properties decreases revenues for the church's good works and breaches "existing agreements and international obligations which guarantee the rights and the privileges of the churches, in what seems as attempt to weaken the Christian presence in Jerusalem."

The church leaders' closing of the Church of the Holy Sepulcher during Lent, close to Easter, the busiest time for pilgrims, drew international attention and condemnation.

In Amman, Jordan, Feb. 25, Mohammad al-Momani, Jordanian minister of state for media affairs, called on "the Israeli government to immediately reverse the decisions taken against churches and respect its obligations under international law as an occupying power in East Jerusalem."

Under a 1994 peace accord with Israel, Jordan is recognized as the legal custodian of Christian and Muslim holy sites in Jerusalem. It is also only one of two Arab countries to have a signed peace treaty with Israel.

In a statement made available to Catholic News Service, al-Momani reiterated "Jordan's absolute rejection of Israeli authorities' systematic measures to change the historical and legal status quo in East Jerusalem's holy sites, including Islamic and Christian property and endowments as well as imposing further restrictions on Christian churches in Jerusalem, the most recent of which was the Jerusalem municipality's seizure of church property and bank accounts on the pretext of not paying financial dues related to building taxes."

Contributing to this story was Dale Gavlak in Amman.