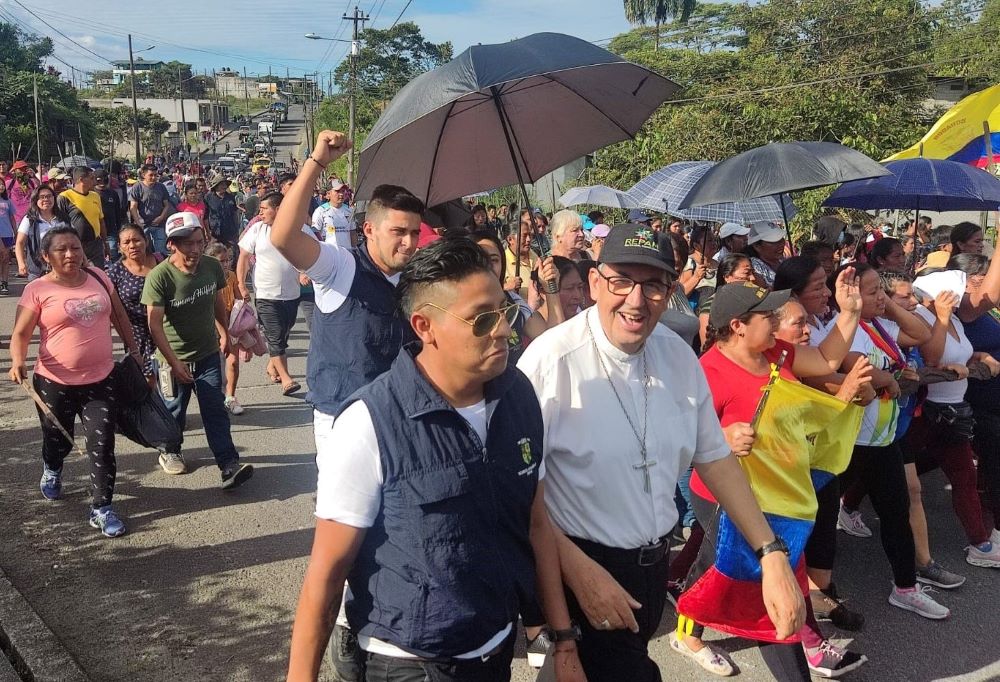 Bishop Rafael Cob of Puyo has condemned reports of violence at protests in Ecuador, but said, "The general strike came in response to a situation of injustice and marginalization of the poor." (Courtesy of Rafael Cob)

For 18 days in June, much of the Ecuadorian economy shut down as a general strike focused on fuel prices, unemployment, and environmental destruction caused protests across the country.

The strike was suspended June 30, largely due to efforts undertaken by Ecuador's Catholic bishops to mediate among union groups and the national government.

The church was invited to participate after previous attempts at dialogue had failed — and has been trying to show the authorities that social peace depends on listening to the poor.

Archbishop Luis Cabrera of Guayaquil, who heads the bishops' conference of Ecuador, or CEE, had asked, via video, for dialogue, then the episcopate issued a statement June 23 calling for a truce and inviting the protesters and the government to negotiate solutions.

But the Confederation of Indigenous Nationalities of Ecuador, or CONAIE, the major organization behind the general strike, did not accept the initial call for a truce, claiming it did not see any possibility for dialogue.

As the crisis intensified, the protest leaders changed their minds. An agreement with President Guillermo Lasso's administration over the outstanding issues still seems an improbable outcome, though. 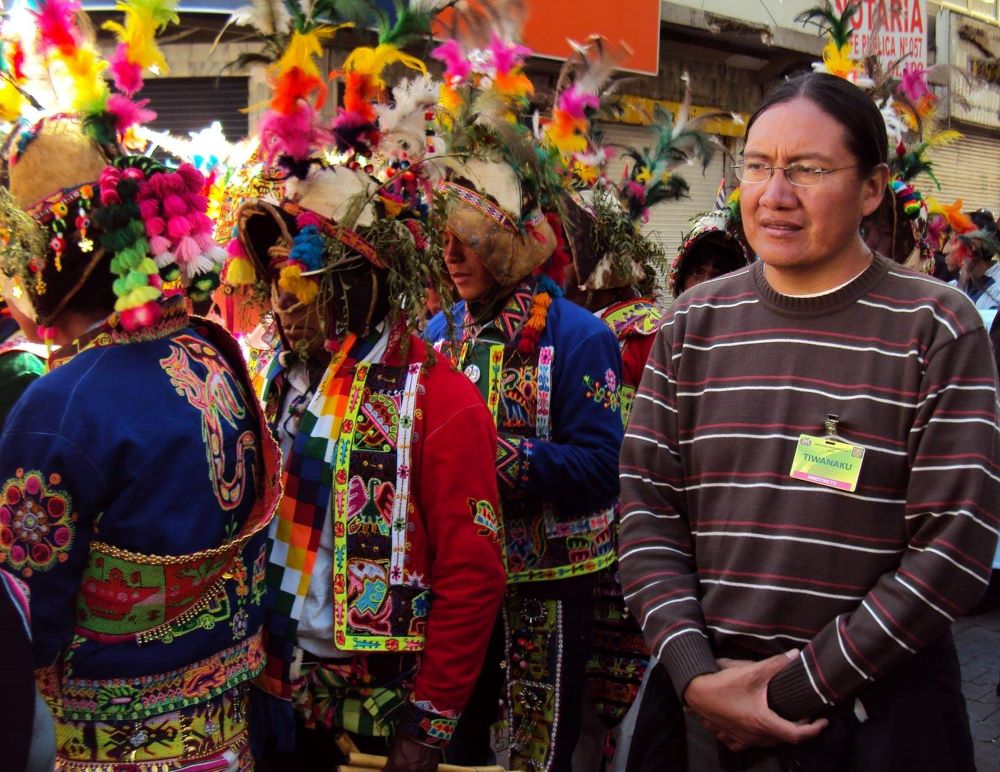 Floresmilo Simbaña, a former director of the Confederation of Indigenous Nationalities of Ecuador, said Indigenous movements call for bilingual education and land rights, but also protest the rising fuel and food prices that affect all Ecuadorian people. (Courtesy of Floresmilo Simbaña)

Floresmilo Simbaña, a former director of the CONAIE confederation, told NCR that Lasso did not initially seem to have "any intention to negotiate with the movement."

In fact, on June 28, Lasso spoke polemically in a televised address, saying he would no longer talk to an "opportunistic" leader, referring to the confederation's president, Leonidas Iza. Lasso claimed Iza had "deceived" the Indigenous peoples and "the whole country."

Cabrera told NCR that he spoke to Iza June 29, the day after Lasso's statement.

"Leonidas Iza called me and asked me if the church would agree to mediate the conversations with the government," the archbishop said. "We immediately accepted the idea and informed the government about it."

The national strike was a reaction to rising fuel and food prices, which have been seriously impacting the lives of the poorest in the South American country. Since 2020, the price of a gallon of gas has jumped from $1.75 to $2.55, leading to higher prices for other essential goods.

The COVID-19 pandemic intensified longstanding structural problems in the Ecuadorian economy. One third of the population live in extreme poverty and two thirds of the labor force work in precarious, or informal, jobs or are not fully covered by the country's labor protections.

The Indigenous movements also demanded respect of their rights and territories, with no further expansion of oil and mining projects, and larger budgets for public education and health care services.

"The Indigenous movements have always had a national nature. Of course we struggle for our rights too, like the right to bilingual education, but we have been concerned with problems that affect the whole Ecuadorian people," Simbaña said.

'Being heard is a human right.'
—Bishop Rafael Cob

The roadmap for dialogue suggested by the bishops, and coordinated with both parties, defined that each of the 10 demands presented by the Indigenous movement would be dealt with in a specific way at the negotiating table.

The discussions began with the theme of renegotiation of debts with public and private banks.

"Many people owe money to the banks, including numerous small farmers. Those are usually low amounts, but in case of failed crops, nobody can pay them," said Julia Serrano, a Spanish-born lay missionary in the city of Riobamba, in Chimborazo province.

She celebrated the fact that the first mediated negotiation was successful and thousands of debts are being pardoned or refinanced.

But debate on other topics will certainly be more difficult, said Serrano, who arrived in 1983 in Chimborazo, where most of the population is Indigenous, and worked until 1988 with the late Bishop Leonidas Proaño, a central figures of liberation theology in Ecuador and a major advocate of Indigenous rights.

"The issue of mining and oil drilling in Indigenous territories — and their consequences — will cause a heated debate and will probably generate more struggles," she said.

In July 2021, Lasso approved a decree with the intention of expanding oil drilling in the country. The plan involved the concession of blocks of land to private companies, which Indigenous activists, fiercely oppose, fearing such concessions would risk their territories and endanger the Amazon rainforest.

Another decree, dealing with mining projects, was equally opposed by the Indigenous communities. While the government argues that the objective is to formalize the mining sector in Ecuador and fight illegal operations, CONAIE and other social movements see the move as part of an effort to expand the exploitation of resources in protected areas without consent from Indigenous peoples. 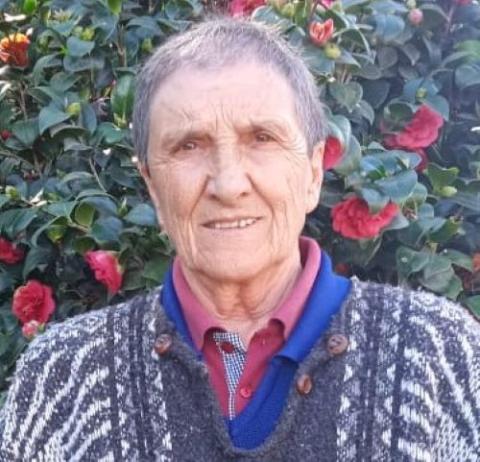 Julia Serrano, a Spanish-born lay missionary, has worked in the city of Riobamba, in Chimborazo province, since 1983. (Courtesy of Julia Serrano)

As a result of the recent national strike, the decree on oil was suspended and the law on mining will be revised. The negotiations mediated by the bishops will now include discussion of those topics. The negotiations are scheduled to be concluded within 90 days, but the debate may take longer.

"The exercise of power among the Indigenous peoples is rather horizontal. The leadership continually listens to the people in the base," Serrano said.

CONAIE and other movements are still waiting for the government to take concrete measures concerning hundreds of activists — many of them Indigenous — who have been arrested over the past year after protesting for their territories and the environment.

"There are now hundreds of legal cases against community leaders," Simbaña said. "That is a demonstration that the government does not really want to move forward."

He and other leaders hope that intervention by the church and other organizations can force Lasso's administration to pay attention to the people's appeals. 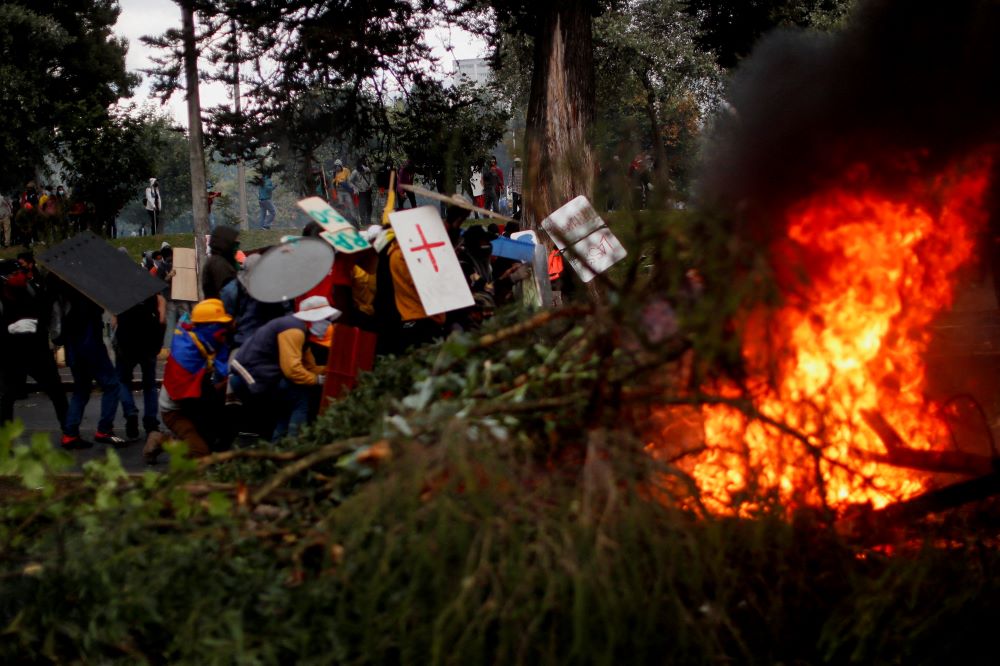 Many in Ecuador think that a message from Pope Francis against violence in the country played a role in the government's willingness to negotiate. As part of his Angelus address in St. Peter's Square on June 26, after 14 days of protests, the pontiff mentioned Ecuador and said it is "only through dialogue that social peace can be achieved, with particular attention to the poor and marginalized population." He called all sides to abandon extremist positions.

Bishop Rafael Cob of Puyo condemned reports of violence at the protests, but said the protesters had legitimate grievances.

"The general strike came in response to a situation of injustice and marginalization of the poor. It is clear that the current Ecuadorian administration has a neoliberal nature, and that has an impact on the lives of the working poor," Cob told NCR.

The bishop lamented the acts of violence that led to hundreds of injured people and at least six deaths during the demonstrations, and said that the church worked to reduce radicalization and to build dialogue.

"In Puyo, the church invited different segments of society to the table," said Cob, who added that church officials had also helped make way for emergency services on roads that were blocked by protesters.

The diocese also offered places for people to meet, and handled donations and food distribution for the poorest during the crisis.

"Our presence was important to show to the people that we could reduce tensions even during the 18 days of strike," Cob said. "The church humanized the situation."

Cabrera, Guayaquil's archbishop, is hopeful about the negotiations. He said that both parties have been fulfilling their commitment to serious dialogue.

"That has been an important exercise of democracy," he said.

Cob, who is the vice president of the Pan-Amazon Ecclesial Network, or REPAM, said that organization has been following the plight of Indigenous groups to protect the rainforest from exploitation, so Catholic movements had already been intimately involved with several of the demands CONAIE presented during the strike.

Cob said politicians should learn to take into consideration the people's demands.

"Being heard is a human right," said the bishop. "The people's appeals should be listened to, before they end up making use of violence. Governments have to learn how to listen to them."

A version of this story appeared in the Aug 19-Sept 1, 2022 print issue under the headline: 'An important exercise of democracy'.