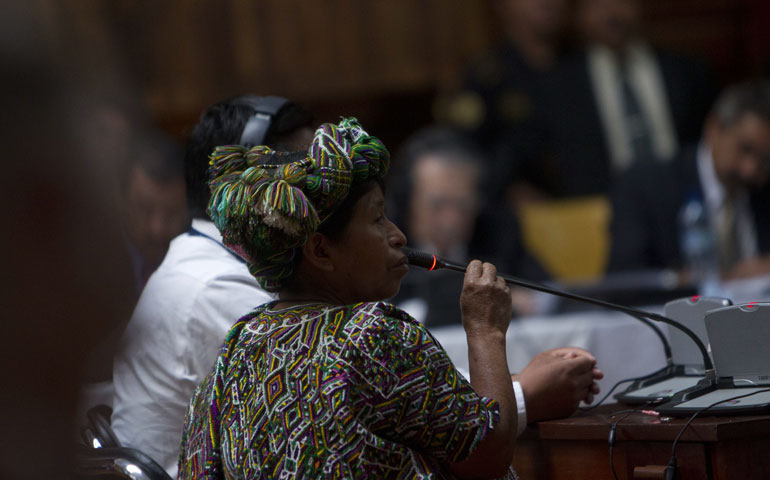 Dozens of survivors of mass violence in the 1980s have testified in keening voices in a Guatemala City courtroom under the gaze of former Guatemala strongman Gen. Efraín Ríos Montt, accused of genocide in a landmark case. Since a near chaotic beginning March 19, when defense attorneys tried to delay proceedings, Judge Jazmín Barrios has controlled the courtroom.

The genocide charge is based on the deaths of 1,771 Ixil Maya indigenous residents of a northern mountainous region, where guerrillas maintained a strong presence in 1982-83. The trial is expected to last several more weeks.

Men and women, sometimes elderly, often wearing colorful woven traditional dress, are delivering riveting, occasionally stupefying accounts of brutality and murder of family members, and of hardships fleeing soldiers and aircraft in mountainous wildlands, eating only grass and roots for months. They speak of watching soldiers burn houses, of crops destroyed and livestock killed, drawing a picture of a once tranquil way of indigenous life erased at army hands.

On Nov. 4, 1982, Tomás Chávez Brito, 50, said soldiers from the garrison at a plantation called La Perla came into his village area of Saxibán and killed his mother, six siblings, two nephews and two in-laws. "My nephews were very small. They had done nothing to anyone."

"I think soldiers took advantage of the time we men were not at home," said Jacinto López, 82. Ixil Maya men and boys often work milpa, fields of corn and beans, an hour or more walk from their houses.

López said that on July 15, 1982, returning from his milpa, he found his wife, Jacinta, and two small sons, Tomás and Miguel, dead on the trail to his house, their heads destroyed, "it seemed by machete." Prosecution attorney Edgar López said forensic experts will testify that 38 percent of remains recovered in exhumations at massacre sites in the Ixil area belong to children under age 12.

When soldiers set fire to their house, said another witness, Pedro Chávez*, he hid with an older sister and siblings aged 2 and 5 in the family temescal, a structure of baked clay used for steam bathing. Then age 7, Chávez said his sister and her infant, born the day before, lay covered with a poncho. "Don't kill us," he testified to saying when soldiers discovered them. " 'Where are the guerrillas?' they said. 'You're a guerrilla' they said to my sister, you feed them.' " Chávez said that before he ran free, he saw soldiers tie his sister to a ladder so she could not move as the fire continued to consume the premises and the other children.

Ríos Montt, hale-looking at age 86, ruled Guatemala for 18 months ending in August 1983, a particularly flagrant killing period in Guatemala's civil war. Some 200,000 people, mostly civilians, died during the 36-year conflict, according to a U.N.-sponsored report. Dressed in a business suit, sometimes using earphones, the general watched and listened from the defense table, conferred with counsel, took notes or twisted a ballpoint pen between his fingers, appearing generally relaxed and confident.

More than one witness has stated a belief he or she survived in order to testify "before the law" for the sake of those who died.

The genocide trial is the culmination of years of work and pressure by Guatemalan survivors, along with their allies in local and international rights groups. Preeminently a legal procedure, the trial nevertheless also serves as a public forum where the aggrieved from one of the land's most remote corners may recount their experience in an atmosphere of respect before the wider country. How much Barrios is able to keep witnesses from giving voice to the torrent of memory and indignation unleashed by the trial, possibly at the expense of an orderly process, is an open question.

María Cruz Raimundo, 55, and her husband fled their village for mountain wilderness when soldiers attacked. She testified that during bombing by "the instrument," a word some witnesses use for "helicopter," she gave birth to a son, Francisco. She said she nursed with difficulty as "we only ate roots of the San Juan plant." Within months, soldiers killed her husband and the infant died. "When I see a couple walk together I say, 'Why did my husband die?' I am still crying." Dismissed, Cruz asked, "Can I say more? I have more to say. About my son." The judge declined.

Likewise, when Juan López Mateo, 68, took out a pocket photo album and opened it to display pictures of two children, Barrios ordered, "Put that away."

López testified that he returned from working a cornfield late on a September morning in 1982 to find soldiers occupying his village. Hearing gunshots, he hid. López said when the army left hours later he entered his house to find his wife and two children dead, the 5-year-old with the rope around his neck with which he had been strangled, the 2-year-old's head beaten in as if by a stick.

"My heart hurts," López said. In a courtesy gesture still seen in indigenous villages, he lifted an open palm over the room in farewell as he departed.

Each witness is escorted from a waiting room where he or she cannot hear what others have said, sits alone or with an interpreter before the three judges, his or her back to the public while speaking. Survivors and spectators watch with a generally solemn air, sometimes filling the 500-seat audience room. Guatemalans elsewhere follow live Twitter feeds, streaming Internet video and daily newspaper stories.

Witnesses who were very young at the time of the violence have spoken of trauma unshakable until now. Diego Santiago Cedillo, 33, said his mother, uncle and aunt carried him for days in the mountains with their hands clamped over his mouth, lest soldiers hear him. "I was crying, shaking. I was hungry. I couldn't walk. They killed my brother, my father. We didn't have anyone to care for us."

Testimony halted. The microphone caught gasping sounds, as if the witness were fighting to keep from crying, or his mouth covered again by silencing hands. When he continued, Santiago said, he became lost on the trail and was taken in for some days by another fleeing woman. Still sounding distressed, he described the moment his mother reappeared to throw her arms about the child with tears of joy. "I thought she wasn't my mother," he said. Defense attorneys attempted to impugn the credibility of a young child's memory.

"When I am in the milpa, I think of my father," Santiago said. "I remember him, not much, but I remember him like a dream. I can't stand these tears."

As many as a hundred persons are expected yet to testify. Barrios said she wants to hear at least 15 witnesses per day.

'They tried everything in the book'

In an opening-hours spectacle, the court rejected six defense motions to delay the historic trial. When Ríos Montt's attorney accused the judge of hostility, she threw him out, assigning both defendants to a vehemently protesting Calderón. Ríos Montt appointed a new defense team, including former guerrilla commander Danilo Rodríguez, who had been fired by Ríos Montt's family only the day before.

As the first genocide case brought in a national court against a former ruler, the Guatemala trial is important to the international justice system for the clear and transparent way it proceeds, whatever the verdict. It becomes a potential model for neighbors such as El Salvador, where no ranking official has been charged in thousands of civilian deaths in the 1980s, including six Jesuit priests, their housekeeper and her daughter in 1989.

"There is less control in a national court than an international court," Brody said. In Guatemala, he told NCR, "they tried everything in the book but the judge was not bullied."

After a 1982 meeting with Ríos Montt in Guatemala City, U.S. President Ronald Reagan defended the general, saying he got "a bum rap." Washington then authorized the sale of spare parts that gave new life to Guatemalan "Huey" helicopters and A-37 aircraft, the kind witnesses said attacked them in the Ixil Triangle area. Justifying the authorization, a U.S. spokesman said urban violence had "dramatically" declined under Ríos Montt and rural conditions improved. Some in Guatemala called it "the peace of the graveyard."

*Editor's note: An earlier version of this story incorrectly identified the witness.

A version of this story appeared in the April12-25, 2013 print issue under the headline: Survivors take stand at Ríos Montt trial.