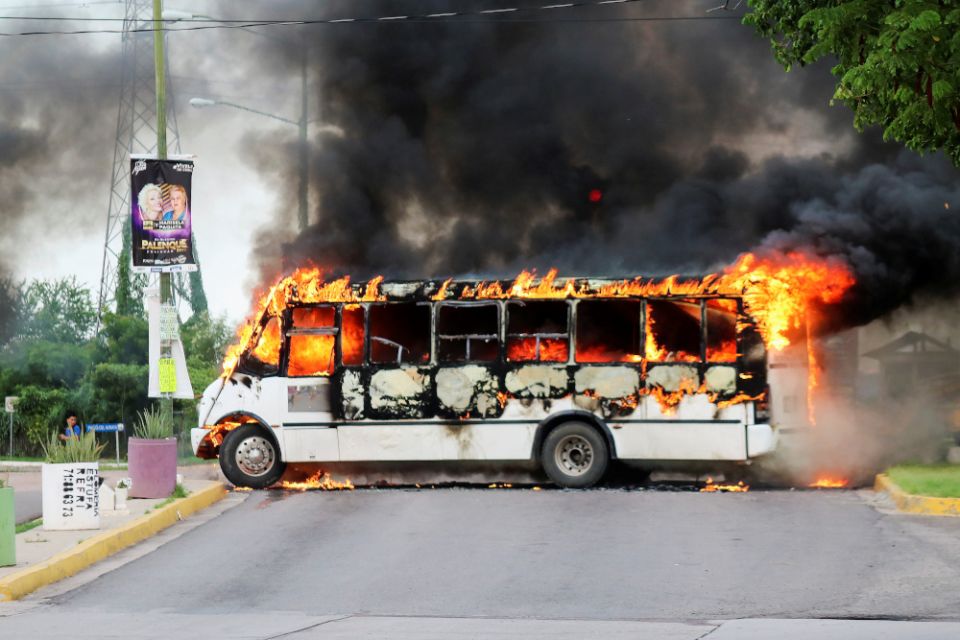 Mexico City — The Mexican bishops' conference called for calm and reflection after well-armed members of a drug cartel descended on the city of Culiacan and forced Mexican security forces to release the son of convicted cartel kingpin Joaquin Guzman Loera, known as "El Chapo."

In an Oct. 18 statement, a day after the violence in Culiacan, capital of Sinaloa state, the bishops "offered prayers" and "expressed solidarity" with the victims and their families.

"We exhort those who provoke violence, death and suffering to rethink (their actions,) repent and convert," the bishops said.

The statement continued, "We urge the authorities to make an extra effort to reduce the staggering levels of violence that a large part of our population suffers through the length of the country."

And "for all believers and people of goodwill, we invite them to join us in working for peace, overcoming all rivalries, confrontation and personal interests."

Gunmen from the Sinaloa cartel quickly deployed around the city, blockading roads with burning vehicles, engaging security forces in gun battles and provoking a mass jail break in which more than 50 inmates escaped.

It was later revealed that security forces, acting on orders from senior government officials, released Guzman to avoid further bloodshed in the city. At least eight people died in the violence and soldiers had been taken hostage by cartel members.

"This decision was taken to protect citizens," Mexican President Andres Manuel Lopez Obrador said Oct. 18. "You can't fight fire with fire. The strategy applied previously (by past governments) turned the country into a cemetery."

The violence in Sinaloa — an agricultural state hugging the Pacific Coast, where the illegal drugs business has deep roots — comes as Mexico's murder rate races to record levels.

The violence left many Mexicans wondering how an armed group could cow the state into submission.

"I'm worried about the risk of moral hazard," said Patricio Estevez-Soto, a Mexican doctoral student in security and crime science at University College London. "Other groups will learn from this. They will know that if they terrorize the public they can make the government yield to their demands."

El Chapo was convicted in a U.S. court earlier this year and sentenced to life in prison. His son still controls the Sinaloa cartel, however, and showed the criminal organization's muscle and influence and ability to beat back the state.

The decision to free the younger Guzman set off intense criticism of Lopez Obrador, who has promised to curb violence by cutting poverty and has admonished drug cartels to behave and "think of their mothers."

Some in Sinaloa say the president acted prudently, however.

"Thugs don't measure the consequences. Soldiers, do," said Ruben Rubio, a Culiacan native who works on social projects in the rugged mountains of Sinaloa. He estimated "800 thugs" were at work on the day of the violence.

Mexico's bishops, meanwhile, said, "We invite everyone to sowers of peace and hope, living (the practices) of justice, respect, dialogue and reconciliation."

'Narco Cultura' explores the meaning of the war on drugs