The chancellery of the Archdiocese for Dijon, France, is pictured in 2013 (Wikimedia Commons/Arnaud 25, CC-BY-SA 3.0)

Paris — Traditionalist Catholics in eastern France have protested against Archbishop Roland Minnerath of Dijon for expelling a clerical religious congregation that celebrates exclusively in the pre-Vatican II or Tridentine Rite.

Several supporters of the Priestly Fraternity of St. Peter (FSSP) gathered in front of the archbishop's office on June 26 holding up signs calling for "dialogue" and "respect for ritual diversity."

Archbishop Minnerath announced on May 17 that he would no longer allow two FSSP priests to continue to reside and offer Mass in the Old Rite — which Benedict XVI renamed the "extraordinary form" — at the Basilica of Saint-Bernard de Fontaine-lès-Dijon.

The archbishop, who turns 75 in November, told the FSSP that members they will have to leave the premises in September.

The decision has caused quite a commotion among FSSP supporters.

The traditionalist priestly fraternity has been in Dijon for 23 years — some five years before Minnerath became archbishop in 2004.

A press release posted June 18 on the FSSP website complained about the lack of "prior consultation" and the "reason given" for the fraternity expulsion.

The archbishop's office referred La Croix to a June 17 list of grievances against the fraternity.

Most notable is the refusal of FSSP priests the past five years to celebrate the post-Vatican II Mass (the "ordinary form") even "from time to time." It said this was contrary to what had been "agreed upon" when the FSSP arrived in Dijon in 1998.

"Such an attitude is indicative of a conception of their ministry that we do not share," said the archdiocese."

The Old Rite should not create a parallel community," it said.

This is in line with the sense of communion that Pope Benedict XVI made clear in his letter accompanying the "motu proprio" Summorum Pontificum in 2007.

"Needless to say, in order to experience full communion, the priests of the communities adhering to the former usage cannot, as a matter of principle, exclude celebrating according to the new books," he wrote.

"The total exclusion of the new rite would not in fact be consistent with the recognition of its value and holiness," Benedict pointed out.

Archbishop Minnerath went on June 26 to talk with the protesters.

"I have made a final proposal to the FSSP, but I don't yet know their answer: either they agree to concelebrate from time to time and stay, them or other priests, or they leave," he said.

He added that Pope Francis was planning to issue a new "motu proprio" that should" set things straight" on this matter.

Controversy around the exclusive celebration of the pre-Vatican II Mass is a thorny issue in other dioceses of France beyond just Dijon. 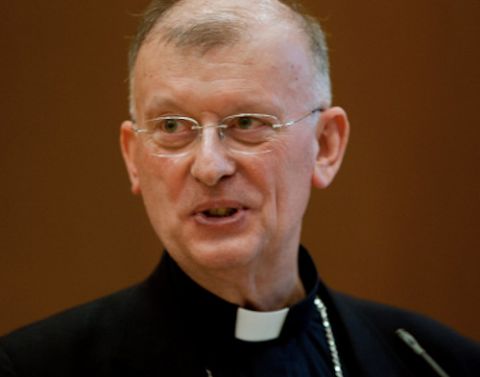 Archbishop Roland Minnerath of Dijon, France, is pictured in 2010 at The Catholic University of America in Washington. (CNS/Nancy Wiechec)

In fact, the pope is about to publish a note on the correct application of Summorum Pontificum.

La Croix has learned there will soon be a review of how the "motu proprio" has been followed, now 14 years since Benedict XVI published it on July 7, 2007.

It is known that Francis wants to strengthen the bishops' authority on this matter.

Currently, any group of lay people wishing to have a Mass celebrated in the Old Rite can refer the matter to Rome if the parish priest and the bishop refuse.

This is why the pope is expected to suppress the Ecclesia Dei section of the Congregation for the Doctrine of the Faith (CDF), which has long been responsible for overseeing relations with traditionalist communities.

Francis already reduced Ecclesia Dei's status in 2019, when he changed it from a commission to a simple office inside the CDF.

This would be a way to further normalize and regulate communities attached to the pre-Vatican II Mass.

But it would also mean they will no longer receive the special place they were accorded in 2007 with the publication of the "motu proprio."

A meeting is scheduled for the end of this week in Dijon between Archbishop Minnerath and the priests of the Fraternity of Saint Peter.

But the local FSSP superior, Rev. Roch Perrel, told La Croix it was impossible for him to concelebrate in the new rite.

"I have chosen a traditional rite; I intend to be faithful to it. It is a choice of life," he said.

"One out of every two priests in the Fraternity of St. Peter is on the same line in France," said a person familiar with the matter.

Your thoughts on reforming the liturgy, part two

The traditional Latin Mass is not the problem with traditionalist communities