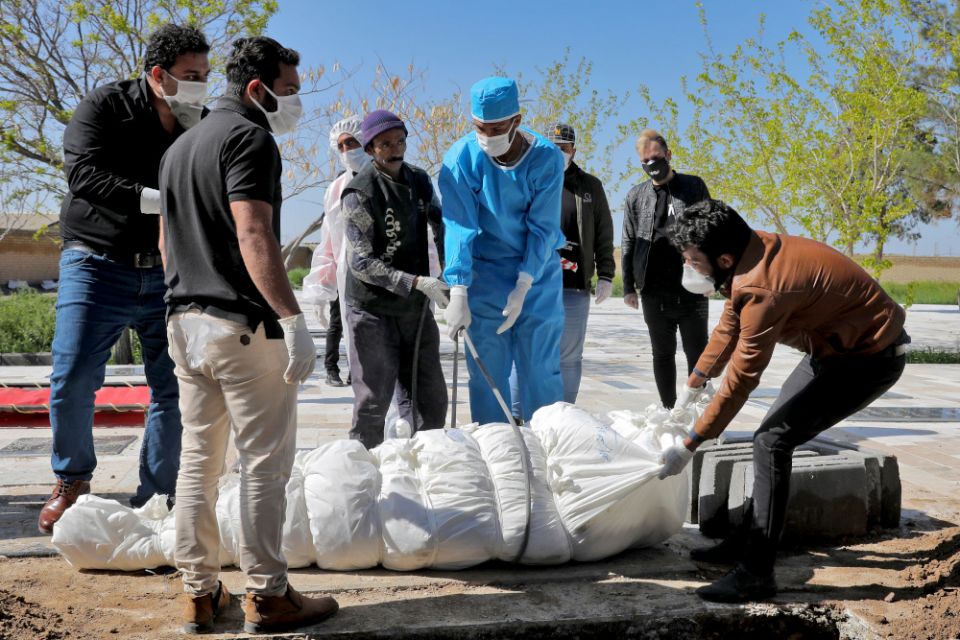 People wearing protective clothings, masks and gloves, attend the funeral of a victim who died after being infected with the new coronavirus, at a cemetery just outside Tehran, Iran, Monday, March 30, 2020.The new coronavirus causes mild or moderate symptoms for most people, but for some, especially older adults and people with existing health problems, it can cause more severe illness or death. (AP/Ebrahim Noroozi)

Tehran — Prisoners in southern Iran broke cameras and caused other damage during a riot, state media reported March 30, the latest in a series of violent prison disturbances in the country, which is battling the most severe coronavirus outbreak in the Middle East.

Israel meanwhile announced that Prime Minister Benjamin Netanyahu will enter self-quarantine after an aide tested positive for the virus. His office says the 70-year-old leader has undergone a test and will remain in quarantine until he receives results or is cleared by the Health Ministry and his personal doctor. His close advisers are also isolating.

Speaking from confinement at home, Netanyahu called on Israelis to remain at home and avoid family gatherings during the upcoming spring holiday season.

The Jewish holiday of Passover, the Christian holiday of Easter, and the month-long Muslim holiday of Ramadan all fall in April. All three festivals traditionally entail large social gatherings.

Netanyahu told Israelis in a televised address that they should "avoid family visits" for the sake of preventing the further spread of the virus.

Netanyahu said the government would discuss possible further restrictions on gatherings of more than two people, a ban on public worship of any kind, as well as a 80 billion shekel ($22 billion) economic rescue plan.

More than 4,600 Israelis have been infected with the new virus and 16 have died.

Iran had temporarily released around 100,000 prisoners as part of measures taken to contain the pandemic, leaving an estimated 50,000 people behind bars, including violent offenders and so-called "security cases," often dual nationals and others with Western ties.

Families of detainees and Western nations say Iran is holding those prisoners for political reasons or to use them as bargaining chips in negotiations.

The state-run IRNA news agency quoted Gov. Enayatollah Rahimi of the southern Fars province as saying a riot broke out at Adel Abad Prison, the main lockup in the city of Shiraz. Rahimi said prisoners broke cameras and caused other damage in two sections housing violent criminals. No one was wounded and no one escaped.

IRNA reported March 27 that 70 inmates had escaped Saqqez Prison in Iran's western Kurdistan province. Prisoners beat guards during the chaos, a local prosecutor said. Several inmates later returned on their own to the prison.

Since the beginning of the year, riots have broken out in prisons in Aligudarz, Hamedan and Tabriz as well, with some prisoners escaping, IRNA reported.

In a separate development, Islamic State militants rioted inside in a prison in northeastern Syria and a number of them managed to escape. That riot did not appear to be connected to the pandemic.

In Lebanon, a criminal court ordered the release of 46 prisoners who were being held without trial to protect them from getting infected, the state-run National News Agency reported. Lebanon has reported 446 cases and 11 deaths from the virus. 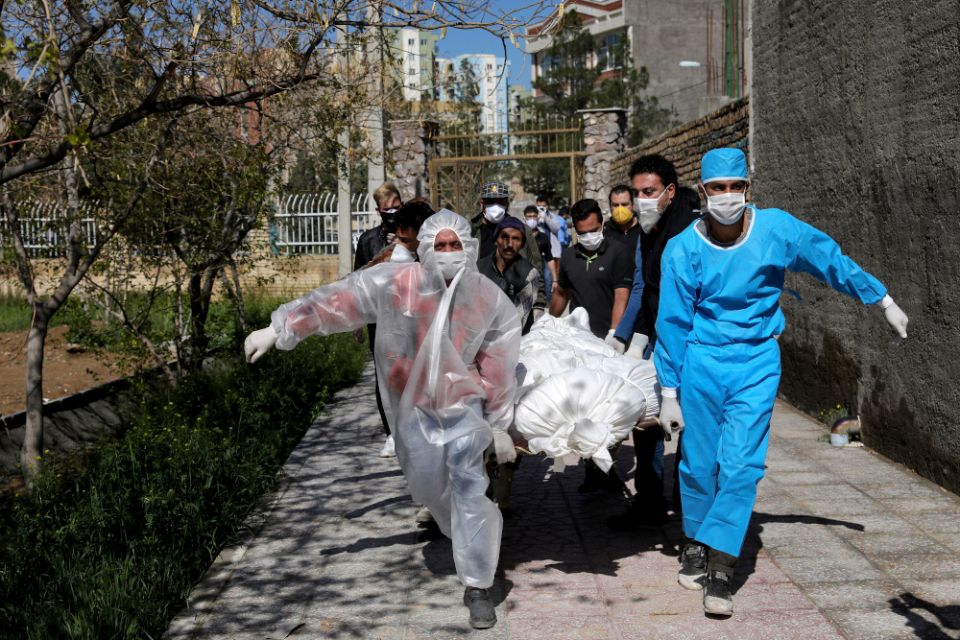 People wearing protective clothing carry the body of a victim who died after being infected with the new coronavirus at a cemetery just outside Tehran, Iran, Monday, March 30, 2020. The new coronavirus causes mild or moderate symptoms for most people, but for some, especially older adults and people with existing health problems, it can cause more severe illness or death. (AP/Ebrahim Noroozi)

In war-torn Yemen, more than 240 prisoners were released in government-held areas as a precaution against the spread of the coronavirus, according to provincial officials, some of whom spoke on condition of anonymity under regulations. The majority were being held on low-level charges, the officials said.

Yemen has not yet detected a case of the coronavirus, likely because of its weak disease surveillance systems. Public health experts have been warning of catastrophic consequences if the illness spreads to the Arab world's poorest country, which is mired in a bloody civil war.

Iran has reported more than 40,000 infections and 2,757 deaths from COVID-19, the illness caused by the coronavirus, including 117 fatalities in the last 24 hours. The Health Ministry says more than 3,500 people are in critical condition, while around 14,000 have recovered.

The virus causes mild symptoms, including fever and cough, in most patients, who recover within a few weeks. But it is highly contagious and can be spread by people showing no symptoms. It can also cause severe illness and death, particularly in older patients or those with underlying health problems.

The virus has infected more than 740,000 people worldwide, causing more than 35,000 deaths, according to data gathered by Johns Hopkins University. More than 150,000 have recovered.

Elsewhere in the region on March 30, Jordan began releasing thousands of travelers who were quarantined for the last two weeks at five-star hotels on the Dead Sea in order to prevent the spread of the virus.

More than 4,200 Jordanians and 1,500 foreigners have been held at the hotels. The Jordanians will be sent home via Uber, the popular ride-hailing service, and are requested to remain at home for another 14 days.

Travelers with other nationalities will be released on March 31. It was not immediately clear where they would go, but authorities said they would be in contact with their embassies and the Foreign Ministry.

Jordan has reported 268 infections and five deaths from the virus. At least 26 people have recovered.

Jordan halted all flights and closed its borders on March 17. It later imposed an indefinite round-the-clock curfew before providing limited times for people to shop for basic goods on foot.

In Egypt, the government extended the closure of the country's famed museums and archaeological sites, including the Pyramids and the Sphinx at Giza, until at least April 15. Authorities still plan to light up the pyramids on March 30 night in an expression of support for health workers battling the virus.

Egypt has reported 656 infections and 41 deaths from the virus.

This Easter, the US should help provide COVID vaccines globally

How does coronavirus connect to climate change?