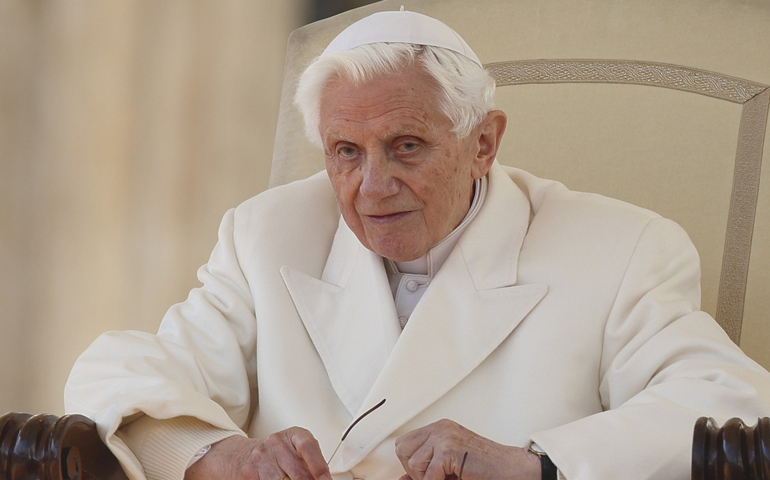 Eight years ago Sept. 12, Pope Benedict XVI delivered a lecture at the University of Regensburg in Bavaria in which he seemed to diagnose Islam as a religion inherently flawed by fanaticism.

It was an undiplomatic assertion, to say the least -- especially coming a day after the 9/11 anniversary -- and it sparked an enormous outcry among Muslims and came to be seen as one of a series of missteps that would plague Benedict's papacy until he resigned in 2013.

Now, with the Islamic State on the march in the Middle East, leaving a trail of horrifying brutality and bloodshed that has shocked the world, some of Benedict's allies on the Catholic right are saying, in effect, "He told you so."

"Regensburg was not so much the work of a professor or even a pope," wrote Fr. Raymond de Souza in a column for the National Catholic Register, a conservative publication. "It was the work of a prophet."

Eight years later, "we have ISIS" -- an acronym for the Islamic State -- "And beheadings. And persecution. And hatred. And war," added Elise Hilton in a blog post for the Acton Institute, a libertarian Catholic think tank.

"It appears that the world owes Pope Benedict an apology," she wrote.

So what did Benedict say at Regensburg that continues to resonate so widely?

The lecture was meant to be a homecoming of sorts for the German pope who had been the chief guardian of orthodoxy for Pope John Paul II.

For it was as a teacher at Regensburg during the 1970s, when he was Fr. Joseph Ratzinger, a leading Catholic theologian in Germany with a growing international reputation, that Benedict was happiest.

In his 2006 speech, simply titled "Faith, Reason and the University: Memories and Reflections," Benedict characteristically took up a knotty concept -- the interplay of faith and reason. He wanted to show how reason untethered from faith leads to fanaticism and violence.

To illustrate that case, Benedict dug up an obscure 14th-century dialogue between a long-forgotten Byzantine Christian emperor, Manuel II Paleologus, and a Persian scholar about the concept of violence in Islam.

"Show me just what Mohammed brought that was new, and there you will find things only evil and inhuman, such as his command to spread by the sword the faith he preached," Benedict quoted the emperor as saying to his Islamic interlocutor.

In Islamic teaching, Benedict said, "God is absolutely transcendent. His will is not bound up with any of our categories, even that of rationality."

Given the tinderbox that was the Muslim world then, as now, it was no surprise that Benedict's citation of Islam as an example of a religion gone wild touched off the firestorm.

Not only were moderate Muslims offended, but extremists attacked churches in the West Bank, killed an Italian nun in Somalia, and beheaded a priest in Iraq. Benedict's allies saw those episodes as proving the pope's point, and they cheered his willingness to "get tough" with Islam. "Benedict the Brave," the Wall Street Journal called him.

But many in the West, and in Benedict's own church, cringed at what they saw as his impolitic -- to say the least -- remarks and criticized his analysis of Islam.

"Today when the news from ex-Iraq is once more making history, and is showing to anyone who has eyes to see what the Quran translated into action looks like, they need to apologize to both of you," Camillo Langone wrote in Il Foglio, a conservative Italian periodical.

Yet those reactions may not be doing justice to Islam, or Benedict.

For one thing, while many Catholic critics of Islam cheered Benedict's Regensburg address, the pope himself tried to distance himself from the more anti-Islamic interpretations. He tweaked the wording of the official Vatican version of the talk to say that the emperor's remarks were delivered "with a startling brusqueness, a brusqueness that we find unacceptable."

And he added explanatory footnotes, saying he is "in agreement with Manuel II, but without endorsing his polemic."

Meanwhile, the Vatican portrayed the speech as an attempt to open a dialogue with Islam, rather than representing it as the pope's final word on Islam.

In fact, a number of Islamic scholars took the opportunity to invite Benedict and the Catholic church to a deeper dialogue on the topic of religion and violence -- a dialogue that in itself showed Islam may not be as reflexively violent as some said. And Benedict went out of his way to repair relations with the Islamic world, visiting a mosque in Turkey and saying many nice things about Islam during the rest of his papacy.

Islam in Spain throughout the Middle Ages, for example, represented a sort of golden age of religious comity and intellectual and artistic flowering that rivaled anything in Christendom.

Benedict "could easily have found other passages by Muslim scholars showing the compatibility, even the necessity, of faith and reason as allies not enemies in Islamic thought," wrote Bruce Lawrence, Islamic scholar and professor emeritus at Duke University, in an email from India, where he is delivering a series of lectures.

Lawrence cited the 14th-century Arab scholar Ibn Khaldun as an influential Muslim who argued that " 'aql" (the Arab word for intellect) and "naql" (meaning tradition) "are as close in practice as they are in sound; i.e., they rhyme and complement one another."

Others note that the religious wars that raged across Europe in the wake of the Reformation are among the many instances of brutality carried out by Christians that rival anything we see today in the Middle East.

In a column for The Week, for example, Michael Brendan Dougherty detailed how the English and the established Anglican church treated the Irish and Catholics much the way the Islamic State deals with its foes.

But such historical analogies aren't going to make many feel better about the present-day predicament.

Neither is it clear what Benedict would make of all of this. He is retired and living in semi-reclusion in a Vatican convent and doesn't seem eager to stir the pot.

As the Rev. George Rutler wrote in Crisis, a conservative Catholic magazine, "like the bold prophet Jeremiah, the benign prophet Benedict will never say in this world or from the next, 'I told you so.' "