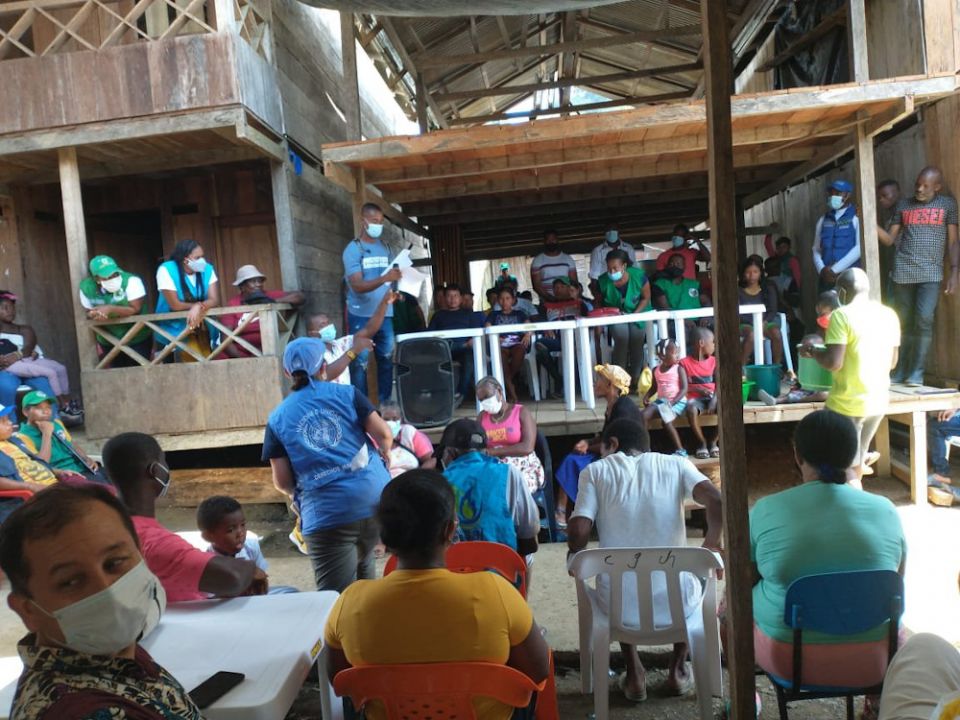 Humanitarian workers from the United Nations and other agencies, hold a meeting with villagers on the Baudó River in the department of Chocó, Colombia, Feb. 23, 2021. More than 280 people living along the river had to flee their homes in February to escape fighting between armed groups. (CNS photo/Diana Losada, U.N. Human Rights office in Colombia)

Bogotá, Colombia — Bishops in Colombia's Chocó department are calling for a cease-fire between the Colombian army and rebel groups fighting over drug trafficking routes and illegal gold mines in one of the country's most remote regions.

In a statement issued March 1 — following a weeklong expedition to more than a dozen villages — the bishops of Quibdó, Istmina and Apartadó called on Colombia's government and the National Liberation Army, or ELN guerrillas, to focus on peaceful solutions to armed conflict and respect the rights of Indigenous people living in the area.

"Militarizing this area should not be the main priority," read the statement, which said the government of President Iván Duque needs to make greater efforts to provide access to health care, education and infrastructure that will enable villagers in Chocó to make a decent living. "The implementation of a humanitarian accord is urgent."

Violence in Chocó recently has forced hundreds of Indigenous people and members of Afro Colombian communities to flee their homes in the countryside and head to small towns and villages.

Roads are scarce in the region, which is covered in dense tropical jungle, and most villages are only accessible through river transport, making it tougher for humanitarian groups to take assistance to those who have been displaced.

Along the Baudó River — one of Chocó's main waterways — 290 people were forced to flee their homes in late February, according to the Colombian government's human rights ombudsman.

The government agency said an additional 4,000 people living along the Baudó River are currently trapped in their villages and unable to fish or go to their farms, due to threats from the ELN and the Gaitanista Self Defense Forces, the two largest armed groups fighting over the region's natural resources.

Between Feb. 22 and 25, a delegation of Catholic church leaders and humanitarian workers visited the Baudó River to speak with locals and provide some assistance.

"People told us that their animals are being stolen, the armed groups are also taking their crops and not letting them tend to their fields," said Bishop Hugo Torres Marín of Apartadó.

Torres explained that the Baudó area used to be under control of the Revolutionary Armed Forces of Colombia, or FARC, which made a peace deal with the Colombian government in 2016.

But after the FARC left, the ELN guerillas and the Gaitanista paramilitary group moved into the area and began to fight over its gold mines, timber and drug trafficking routes.

"The peace deal was only with the FARC," Torres said. "Now we need a peace deal with the ELN and some type of deal to demobilize the paramilitary groups."

The Colombian government started peace talks with the ELN guerrilla group in 2018, but those were canceled by Duque a year later, after the rebels bombed a police academy in Bogotá, killing 23 people.

Duque has said that he will only restart peace talks with the ELN if the group frees all of its hostages and stops conducting criminal activities like attacks on oil pipelines and police stations. Otherwise, the president says, starting peace talks would be "validating violence."

Colombia's government has struggled to control violence in some rural areas since the 2016 peace deal was signed, and the situation has become notably worse over the past two years.

But 74 massacres were carried out by armed groups in the country in 2020, twice as many as the previous year. These are defined as incidents where three or more people are killed. The U.N. also said that 25,000 people were forced to abandon their homes in rural areas of Colombia to escape fighting between armed groups.

Torres said programs that bring better infrastructure to rural areas and help people to find legal ways to make a living can help to stop violence. Many of these programs are included in the 2016 peace deal.

"If the government continues to be slow and doesn't implement the peace accords, we will end up in the hands of the paramilitaries," the bishop said.