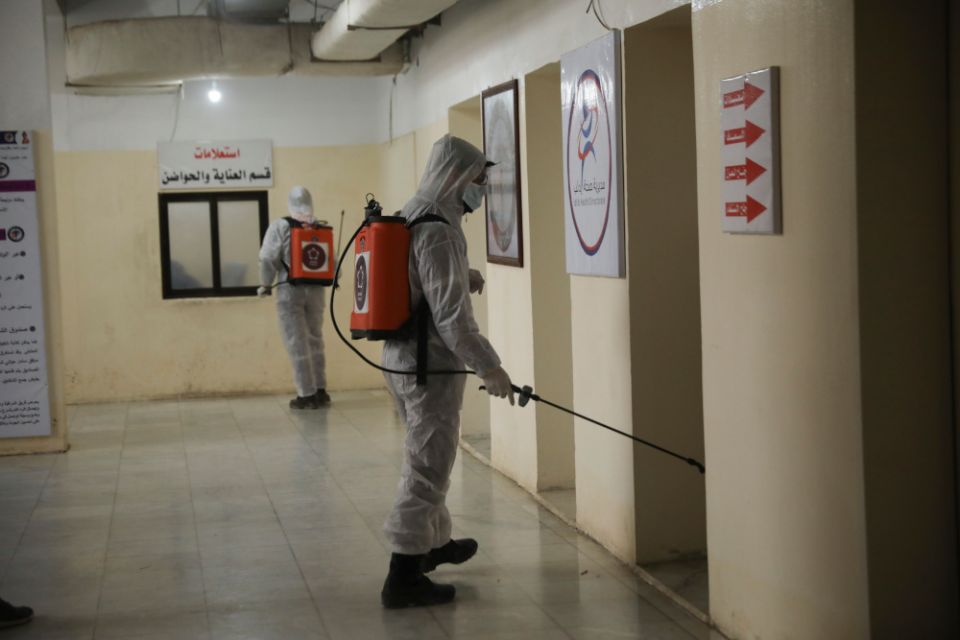 Members of a humanitarian aid agency disinfect Ibn Sina hospital as prevention against coronavirus in the city of Idlib, Syria, March 19, 2020. (AP/Ghaith Alsayed)

Damascus, Syria — Syrians rushed to stock up on food and fuel March 23 amid fears that authorities would resort to even stricter measures after reporting the first coronavirus infection in the country, where the healthcare system has been decimated by nearly a decade of civil war.

The arrival of the global pandemic in Syria as well as the Gaza Strip has raised concerns it could run rampant in some of the most vulnerable areas in the Middle East. War-torn Libya and Yemen, which have yet to report any cases, are also a source of concern.

The worst outbreak in the Middle East is unfolding in Iran, where state TV reported another 127 deaths on Monday, bringing the total number of fatalities to 1,812 amid more than 23,000 confirmed cases. Iran has faced widespread criticism for not imposing stricter quarantine measures early on. It is also suffering under severe U.S. sanctions.

Lines formed outside grocery stores, banks and petrol stations across the Syrian capital, Damascus, as people braced for wider closures. The government has already closed restaurants, cafes and other businesses, and has halted public transportation.

The city's famed Hamidiyeh souk, a network of covered markets running through the Old City, was deserted after the government ordered all shops closed on March 22.

Authorities closed border crossings with Lebanon and Jordan, and Damascus International Airport was closed to commercial traffic after a final flight arrived from Moscow. State-run newspapers issued their last print edition and will only be available online.

Countries across the Middle East have already ramped up restrictions on daily life in an effort to contain the global pandemic. Many have sealed their borders and cancelled flights.

The United Arab Emirates, home to the world's busiest international airport, said it was suspending all passenger and transit flights for two weeks. Dubai's airport is a vital hub connecting Western nations with Asian countries and Australia, and suspending transit flights there affects travelers around the world.

Most people only experience mild symptoms from the COVID-19 disease caused by the virus and recover within weeks. But it is highly contagious and causes severe illness in some patients, particularly the elderly and those with weakened immune systems. People can carry and spread the virus without showing any symptoms.

Syria has close ties to Iran, which is a key ally of the government in the civil war, and Shiite pilgrims frequently travel between the two countries. Syria's Health Ministry reported the first case of coronavirus late March 22 – a 20-year-old woman it said had arrived from another country, without elaborating.

Syria's health care system has been ravaged by nearly a decade of war that has displaced millions of people and spawned rampant poverty. Hospitals and clinics across the country have been destroyed or damaged. The government is also under heavy international sanctions linked to its conduct during the war. 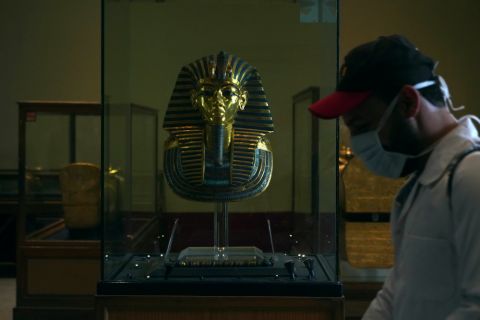 A worker disinfects around King Tut's famous mask in the Egyptian Museum in an effort to help prevent the spread of the coronavirus, in Tahrir Square, Cairo, Egypt, March 23, 2020. (AP/Hamada Elrasam)

An open-ended curfew went into effect Monday in parts of northern and eastern Syria, which are controlled by a Kurdish-led civilian administration. It was not immediately clear how that would affect hundreds of U.S. troops stationed in the region.

Gaza, where two people tested positive after returning from Pakistan, has been under an Israeli and Egyptian blockade since 2007, when the Islamic militant group Hamas seized power from rival Palestinian forces.

The coastal territory is home to more than 2 million people but it only has around 60 ventilators. All but 15 are already in use, according to Abdelnasser Soboh, director of the World Health Organization's Gaza office.

Yemen, where Saudi Arabia has been leading a war against Iran-backed Houthi rebels since 2015, is already home to one of the world's worst humanitarian crises. Millions depend on food aid, and the country has suffered a series of cholera outbreaks in recent years.

Altaf Musani, the WHO representative in Yemen, said the entire healthcare system in the nation of 29 million people is operating at less than half its capacity. Officials are "deeply alarmed" by the possibility of an outbreak, which would be "catastrophic" for Yemen, he said.

In eastern Libya, authorities will impose a round-the-clock curfew on March 25 that will last one week. The government there is allied with Khalifa Hifter, a military commander whose forces control much of the country and are battling rivals in the capital, Tripoli.

The eastern administration has already imposed a nightly curfew and closed mosques, educational facilities and shops. It has banned large gatherings and suspended public transportation.

In Iraq, authorities have begun using a loudspeaker system for the first time since the 1990 Gulf War to urge citizens to stay at home and avoid large gatherings. Iraq's Health Ministry has reported 23 fatalities among 266 confirmed cases.

Neighboring Jordan used air raid sirens on Saturday to announce the start of a three-day curfew. The government said it would begin delivering essential goods to citizens on Tuesday, working through municipalities, water distributors and large companies. Pharmacies, bakeries and shops will re-open, but without direct contact with customers.

In Egypt, tens of thousands of people working in the major tourist destinations of Luxor, Hurghada and Sharm el-Sheikh, along with 300 families in the Nile Delta, have been ordered into 14-day quarantine.

In Cairo, workers have been disinfecting exhibits in the famed Egyptian Museum, including the gilded mask of King Tutankhamun, better known as King Tut. Authorities have temporarily closed all museums and tourist sites, including the pyramids at Giza.

State-run television meanwhile reported that a second senior military officer has died from the virus in as many days after taking part in disinfecting efforts around the city. Egypt has reported around 330 cases and 16 deaths.