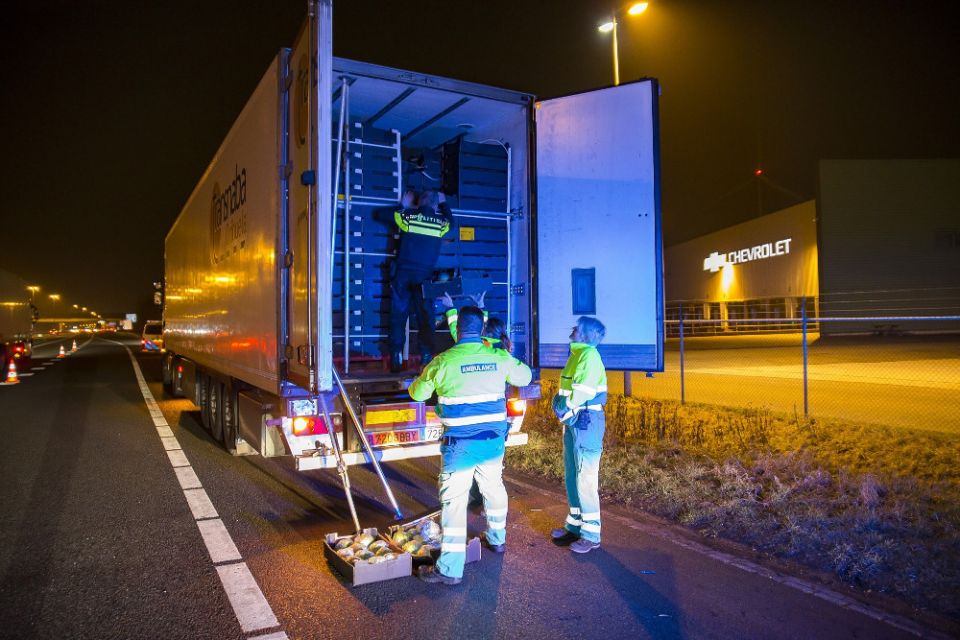 Dutch police search a Spanish truck at the border after nine immigrants were rescued from the freezer of the vehicle in early February in Hazeldonk, Netherlands. The truck driver was arrested as a suspect involved in human trafficking. (CNS/Marcel van Dorst - MaRicMedia, EPA)

United Nations — As long as wars and conflicts rage, "trafficking in persons for sexual exploitation, forced labor and similar crimes will continue to flourish," said the Vatican's nuncio to the United Nations.

"To eradicate trafficking in persons, we must confront all its economic, environmental, political, and ethical causes, but it is particularly important to prevent and end the wars and conflicts that make people especially vulnerable to being trafficked," Archbishop Bernardito Auza said.

He made the comments in an intervention during a U.N. Security Council open debate Nov. 21 on human trafficking in conflict situations.

"Wars and violent conflicts have become the biggest driving force of forced human displacement," the archbishop said. "This situation is an enabling environment for human traffickers, who increasingly exploit this tragic humanitarian situation to target refugees, forced migrants and internally displaced persons themselves in their criminal enterprises."

"One of the most effective ways to eradicate trafficking in persons is therefore to prevent conflicts and put an end to wars," he said, urging the international community to work to end such conflicts and "the eradication of slavery" by addressing all of its causes.

Auza cited U.N. Security Council Resolution No. 2331, which "refers to a correlation between trafficking in persons, sexual violence, armed conflict, terrorism and transnational organized crime." Issued in 2016, the resolution followed by a year the first meeting on trafficking to be held by the Security Council.

"The council has underscored that acts or offenses associated with trafficking in persons in conflict may constitute war crimes," he said.

Any efforts to end violent conflict must "be accompanied by measures to protect affected populations from traffickers, in particular those most vulnerable, like women and children," Auza said.

In that regard, he said, the Vatican wanted to highlight the importance of implementing the Responsibility to Protect "in the context of the migration and refugee crises that facilitate trafficking in persons."

Responsibility to Protect is a global political commitment endorsed by all U.N. member states at the 2005 World Summit "to prevent genocide, war crimes, ethnic cleansing and crimes against humanity."

"When states and the international community have failed to protect people from war and atrocities such that people have felt compelled to flee their homes," Auza continued, "we all have a great and urgent responsibility to protect them from further harm, including falling into the hands of human traffickers."

Declaring that "forced migrants (and) undocumented and irregular migrants in general" are criminals "exacerbates their vulnerabilities, drives them further into the clutches of traffickers and other extreme forms of exploitation," he said.

Such criminalization also "renders them less likely to collaborate with the law enforcement authorities to catch and punish the traffickers," the archbishop added.

Achieving the specific targets of the U.N. Sustainable Development Goals that are aimed at ending human trafficking "is an integral part of our efforts," he said.

"Likewise, leaders and followers of various religions around the world must do all in their power, within their respective communities and beyond, to save the millions of children, women and men who are forced to live in slave-like conditions," he said.

Auza said he and his delegation also wished to thank "all faith-based organizations and religious communities, in particular women religious, who have long been at the forefront in the fight against trafficking in persons."

He praised the organizations and women religious for their commitment "to accompany survivors with loving concern on the long journey back to living a life in freedom and dignity."