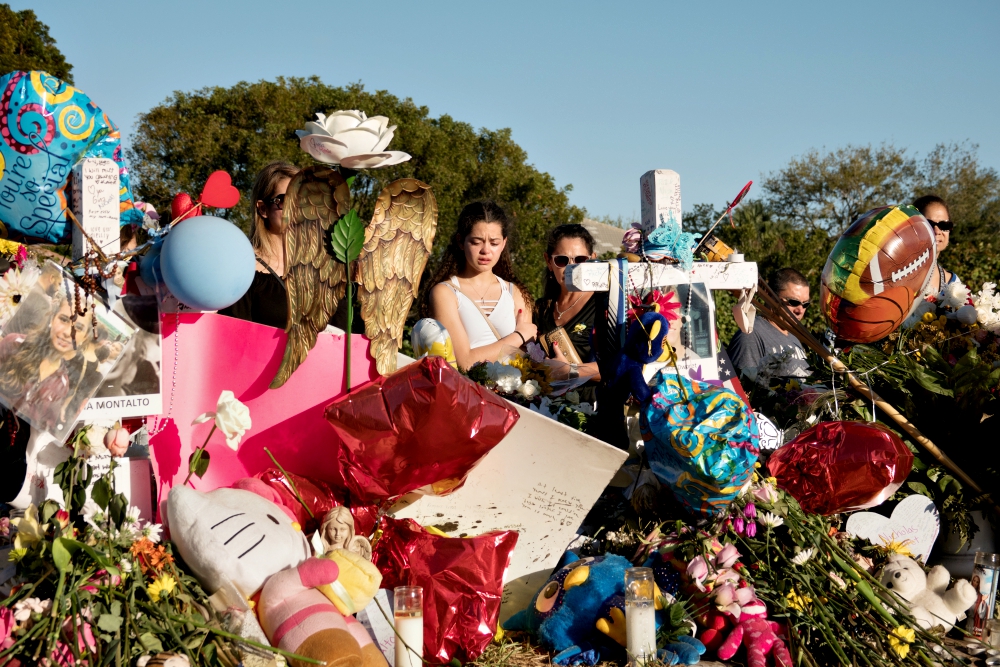 In the face of yet another mass shooting, this time at a Florida high school, and the suffering that attack occasioned, the Catholic Church brings both its prayers and its belief that death is not a wall but a door.

We should not jeer at the ability of prayer to ground solidarity, nor at the power of belief to, over time, heal the wounds that death inflicts. In the face of a natural disaster, there is little else we humans can do. But these mass shootings are not natural disasters, and prayer and belief, though essential, are not enough, because there is something morally bankrupt about mourning the dead, incident after incident, without also taking steps to ensure that it is harder to carry out another such attack in the future.

The Catholic Church brings gifts to this latter task as well. The pillars of Catholic social doctrine — human life and dignity, solidarity, subsidiarity, charity — all shed light on how to combat the scourge of gun violence and to do so in a way that no one who values sportsmanship and hunting need worry.

The application of some of these ideas drawn from Catholic social doctrine are not difficult to ascertain: The most basic principle of Catholic social thought is that every human person is endowed by God with life and dignity, and the degree to which life is protected and dignity is enhanced is the exact measure of justice in a society. The fact that the United States, alone among the large industrialized nations, suffers from these repeated mass shootings is an affront to human life and dignity of the most basic and obvious sort.

Similarly, charity demands that we not only seek to avoid future tragedies on behalf of potential victims, but also on behalf of potential perpetrators: It is not charity to place a gun in the hands of a mentally unstable individual, giving him the means to commit a crime and earn just punishment, when what he needs is treatment.

I should like to focus on solidarity and subsidiarity, however, and see how they can guide our thoughts about how to curb gun violence.

Solidarity is nothing more than the recognition that we humans are bound together, that however great our individual efforts, achievements and disappointments, we bear some responsibility for our fellows, and not just for ourselves, that we are in this together. For Christians, it is rooted in the further idea that we are made in the image and likeness of a triune God, and so there is relationship even at the very essence of reality, the Godhead.

Subsidiarity is the idea that the solution to any given social problem is best made at the lowest possible level of social organization and the highest level necessary. Further, because the Latin root is subsidium, or help, whence we get the word subsidy, subsidiarity is about how the different levels of a society, from the family, through intermediate social bodies, and up to the level of government, can help one another to achieve the common good.

In his encyclical Caritas in Veritate, Pope Benedict XVI wrote, "The principle of subsidiarity must remain closely linked to the principle of solidarity and vice versa, since the former without the latter gives way to social privatism, while the latter without the former gives way to paternalist social assistance that is demeaning to those in need" (emphasis in original). This is key in understanding how we, as Catholics, should discern solutions to the problem of gun violence.

I submit that while families and communities can and should take the lead in efforts to keep guns out of the hands of those with mental health issues, and generally provide care for such individuals beyond merely keeping them away from guns, it is only at the federal level that gun control legislation is possible.

Conservatives and National Rifle Association flunkies cite the high levels of gun violence in cities like Chicago, which has strict gun control laws, as evidence that such laws are not effective. But unless the state of Illinois wants to turn its borders with other states into a series of Checkpoint Charlies of the kind that marked the border between East and West Berlin during the Cold War, guns from states with lax laws can easily be transported to states with stiff laws.

Subsidiarity demands action at the only level of government that will be efficacious, the federal level.

For 10 years, from 1994 until 2004, our nation had a federal assault weapons ban. The ban applied only to new purchases and, regrettably, there were already plenty of guns on the market at the time the law was enacted. Critics of gun control claim it failed, because violence did not significantly diminish.

I think we would have needed to allow the law to run another generation or so to actually test its efficacy. And it is undoubtedly true that the incidents of mass shootings have increased since 2004.

Causality is a difficult thing to prove and if certainty were needed before enacting a given social policy, there would be no social policy. All government action has unintended consequences that must be measured and assessed, adjustments to the original law undertaken, etc. But you have to be either a Second Amendment ideologue or otherwise deluded not to think that banning assault weapons, and trying to buy back as many as are currently on the market as possible, would make it less likely that another angry young man will get his hands on a weapon capable of creating the kind of carnage we have seen at Columbine, Newtown and now Parkland.

We Catholics bring our prayers and beliefs to these horrific mass killings, but we bring much more to the effort to keep future such killings from happening. It is shocking to me that the leaders of the pro-life community, including the U.S. bishops, are not at the forefront of this fight for stricter gun control laws. Let none of them again call anyone on the left a "cafeteria Catholic." You should not have to be in the womb to have your life valued in this country.

It is moral cowardice or hypocrisy or both to sit out the political fight that has been started by the brave, and astonishingly erudite, voices of the Florida high schoolers who survived this latest shooting. Pope Francis insists that people must be agents of their own development and these children have taken that message to heart. May their courage shame the cowards on Capitol Hill into action.