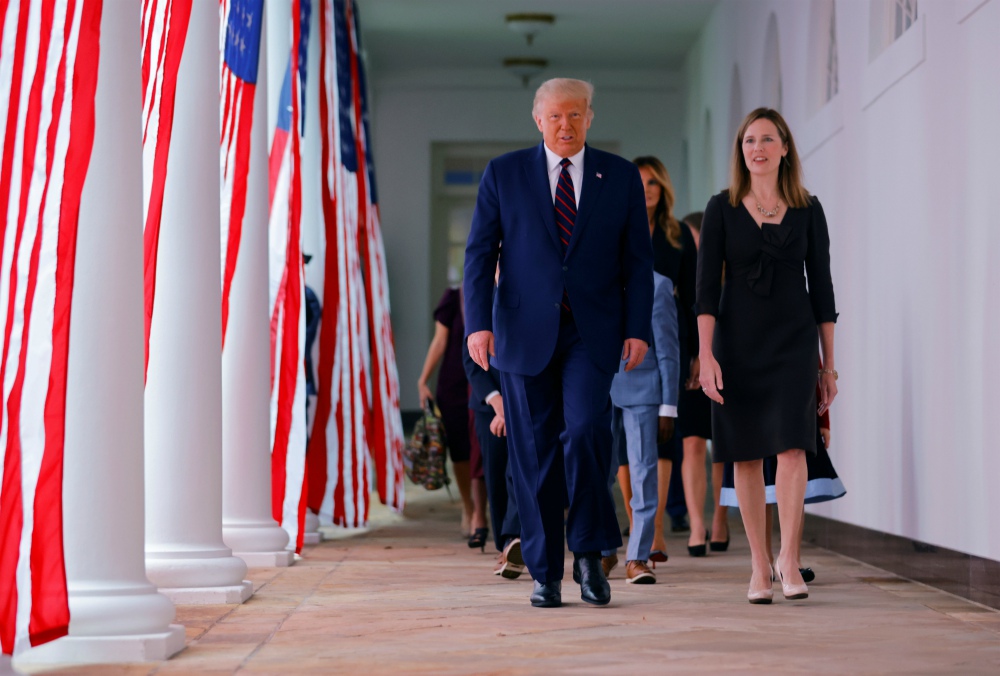 The president's nomination of Judge Amy Coney Barrett to the Supreme Court raises all sorts of issues, some of them complicated and difficult, some of them not. Let's examine them in order.

The decision to move forward with hearings and a vote, though undoubtedly within the constitutional prerogative of the president and Senate, reeks of hypocrisy so clearly, even I was taken aback.

Sen. Lindsey Graham gets the prize for the most egregious flip-flop: His 2016 statement regarding the decision not to move forward on the nomination of Judge Merrick Garland was unequivocal. "I want you to use my words against me," he said. "If there's a Republican president in 2016 and a vacancy occurs in the last year of the first term, you can say Lindsey Graham said let's let the next president, whoever it might be, make that nomination." Now, he supports confirming Barrett and is presumably considering entering the gymnastics competition at next year's Olympic Games in Tokyo.

Second, the Republicans have the votes and there will be no stopping this nomination. Therefore, the Democrats should think long and hard about how they seek to obstruct it. They have a knack for shooting themselves in the foot, mistaking the mindset of their woke advisers and Twitter followers for the views of the American people.

If they attack Barrett's religious beliefs, they might as well hand President Donald Trump a second term. Having put the phrase religious liberty in scare quotes for years, Democrats have demonstrated a cluelessness about how to discuss religion in the public square that astounds. Sen. Kamala Harris' 2018 question to nominee Brian Buescher — "Were you aware that the Knights of Columbus opposed a woman's right to choose when you joined the organization?" — was as ignorant as it was offensive. Sen. Diane Feinstein's 2017 comment about Barrett — "The dogma lives loudly within you" — succeeded only in making Barrett a conservative icon.

Despite the decadeslong conceit that judges are impartial, and that it is wrong for them to speak during their confirmation hearings about a subject that might come before them on the bench, there is only one good reason to vote for or against a judicial nominee: You agree or disagree with their judicial philosophy.

The current Kabuki-theater approach to confirmations is an intellectual sham. You shouldn't have to prove that a nominee smoked pot in high school or failed to pay Social Security wages for a nanny or, in this case, that she holds religious affiliations about which you have questions in order to vote against a nominee whose jurisprudence you think will harm the country.

Liberal legal scholar Noah Feldman argued last week that Barrett deserves to be on the court, that she is supremely qualified, even though he knows he will disagree with many, perhaps most, of her decisions. He argues, "Some might argue that you should want your probable intellectual opponent on the court to be the weakest possible, to help you win. But the Supreme Court is not and should not be a battlefield of winner-take-all political or ideological division."

I am not sure what planet he is living on, but after the court gutted the Voting Rights Act in 2013 and the right to organize in 2018, overturning long-standing precedents to reach its decision, Feldman's hope for a court free of ideological division is at least a decade out of date. Don't get me started on Bush v. Gore.

I also want to challenge the idea that Barrett is a person of impeccable character. Watching her stand beside, and shower praise upon, the president in the midst of his concerted effort to undermine confidence in our democracy, mindful of the hypocrisy the Republicans are demonstrating in moving forward with this nomination and the long-term damage it will do to the fabric of our democracy, I most certainly call her character into question. Like Sen. Mitch McConnell, she is overlooking everything that is egregious and anti-democratic about this president and this moment in order to snatch some power.

She could have asked not to be considered for the post. She didn't. I hope there is a big and ugly asterisk next to her name in every annal of the Supreme Court because of her collaboration with this power grab.

Barrett's religion is already playing a central role in the debate about her nomination. While I am sympathetic to some of the concerns raised at Politico by theologian Massimo Faggioli about Barrett's involvement with the charismatic group People of Praise, Senate Democrats should be careful.

It is appropriate to invite former members who have made serious allegations about the group, just as it is also appropriate to hear from members of the group who think it is wonderful. That testimony will not affect how the Senate votes, and if Democrats appear hostile to traditional religious beliefs per se, they risk undoing the careful, deft work Joe Biden has done to cultivate religious voters.

If I were on the Senate Judiciary Committee, I would come at the issue of Barrett's beliefs from a different angle: I would question the legal doctrine of originalism. The Notre Dame Observer reported on a talk Barrett gave that sought to introduce some sophistication into the legal doctrine that has so animated conservative legal scholars for the past 40 years, distinguishing between "original intent," which she admitted was problematic, and "original public meaning," which she embraced.

"The text of the Constitution controls, so the meaning of the words at the time they were ratified is the same as their meaning today," she said. Is that true? Certainly, when the drafters of the Second Amendment referred to arms, they knew about muskets, not AK-47s. So, is "the meaning" the same?

How does this implicate Barrett's religious beliefs? They might also ask about the anti-Catholic bias of many of the founders and how that affects her understanding of originalism. For example, the first chief justice, John Jay, was a fierce anti-Catholic bigot.

Federal officers, including senators, take an oath with an anti-Catholic slur in the middle of it: "I do solemnly swear (or affirm) that I will support and defend the Constitution of the United States against all enemies, foreign and domestic; that I will bear true faith and allegiance to the same; that I take this obligation freely, without any mental reservation or purpose of evasion; and that I will well and faithfully discharge the duties of the office on which I am about to enter: So help me God."

The reference to "mental reservation or purpose of evasion" evidences Protestant fears of Catholic casuistry. This is perhaps no longer obvious to us as an example of anti-Catholicism, but it would have been obvious to those who crafted the phrasing in the 18th century, the very people Barrett claims to understand so well she is merely following the meaning of their words.

The problem with originalism in any form has always been that it solves a complicated legal problem by replacing it with a historical problem that is just as complicated, and permits its practitioners to claim a veneer of fidelity to the Constitution when, in fact, their theories allow them just as much opportunity as the court liberals to reach the decisions they want.

As well, much of the ugly divisiveness in our culture is rooted in the excessive role judges and lawyers play in our society. The litigiousness of Americans goes back to colonial times, but it has gotten worse as our political system's dysfunctions make the courts more consequential, and legal theories suitable for academic debate have reached beyond their ivory towers to alter the everyday lives of millions of Americans.

Here I discern an additional reason to vote against Barrett: The court needs to have some members with experience of other branches of government and fewer former law school professors. Not since Justice Sandra Day O'Connor left the court in 2006 has there been a justice with experience as a legislator.

It is not appropriate for senators to chastise Barrett for being a particular kind of Catholic. That would violate the constitutional prohibition against religious tests for office. But, as a Catholic, I can voice the fear that Barrett is a kind of conservative, cafeteria Catholic that continues to damage the church in this country, content to let it become an upper-middle-class club for people with conservative sexual ethics.

Recently, Archbishop Charles Chaput said of Attorney General William Barr that "he's disliked by all the right people." It was a remark worthy of a pundit, but unworthy of an archbishop. I am not a bishop, arch or otherwise, so I am going to borrow the remark and reverse it: Barrett is admired by all the wrong people.

If a Supreme Court nominee finds herself championed by conservative Catholic legal scholars, why is it per se unacceptable to ask about those associations? It can't be mere coincidence that when confirmed, Barrett will be part of a six-member conservative majority on the court, all of whom were raised Catholic and five of whom are still Catholic. I thought these conservatives were supposed to be proud of their faith in the public square, that it was supposed to be consequential, and now, all of a sudden, voilà, it has no effect on the nominee's reasoning? Senators may find such questions inappropriate but the rest of us are surely free to pose them.

When news leaked that Amy Coney Barrett would get the nod, and people started to call, my first thought was, "Why couldn't he have picked a Methodist!" The fact that Barrett would join four other Catholics in the conservative majority of the court will alter the way our fellow Americans view the church in ways that are regrettable.

She may be able. She may have the nicest temperament in the world. I just wish our church did not produce so many conservative jurists committed to a legal theory that is hooey.