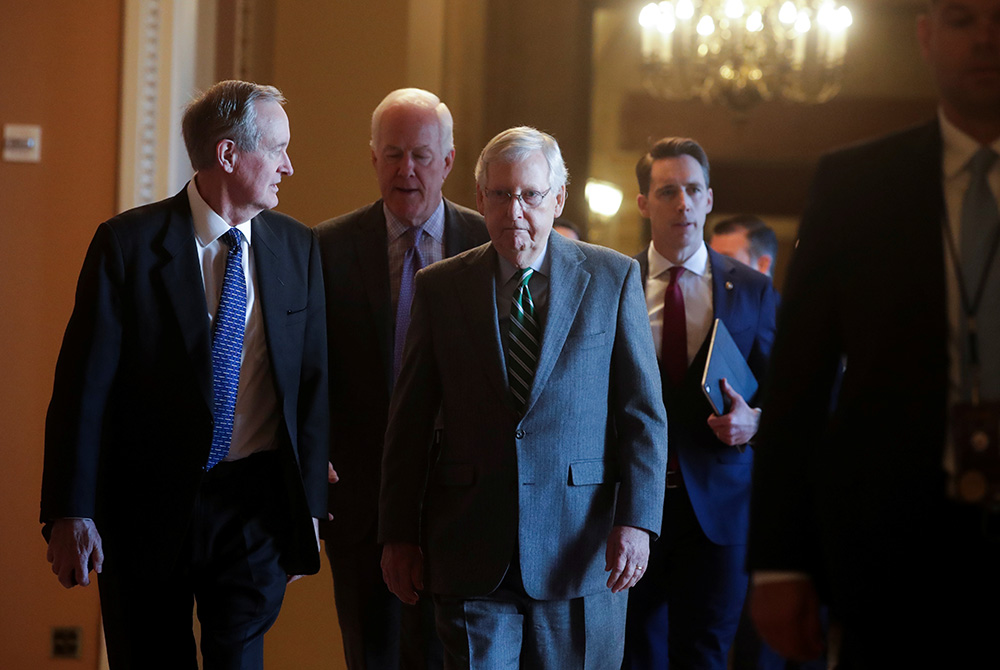 U.S. Senate Majority Leader Mitch McConnell, R-Ky., center, arrives with fellow Republican senators prior to the Senate receiving the House impeachment managers Jan. 16, and the procedural start of the impeachment trial of President Donald Trump at the U.S. Capitol in Washington. (CNS/Reuters/Jonathan Ernst)

It is unsurprising that most of the political commentary in the religious press this year has focused on the presidential contest. In Donald Trump, the nation has a president who is uniquely polarizing around issues of ethical significance from abortion to race relations to income inequality. But the common good, which Pope Francis reminded us in Fratelli Tutti is the moral objective of political life, requires more than a new occupant of the White House, and today I would like to consider some non-presidential contests.

Control of the U.S. Senate is at the heart of this week's lead news story, the confirmation hearing for the nomination of Judge Amy Coney Barrett to serve on the U.S. Supreme Court. Senate Majority Leader Mitch McConnell has been willing to inflict unprecedented damage on our democracy in order to secure power, and it is an interesting intellectual parlor game to debate which is a greater threat to democracy, a man like Trump with bad morals, or a man like McConnell with none. McConnell's hypocrisy in forcing Barrett's nomination through after refusing to grant a hearing to Judge Merrick Garland will go down in history as one of the most Machiavellian acts of any Senate leader. His refusal to pass financial help to Democratic state and municipal governments hit hard by the coronavirus was morally repugnant as well.

Polls in Kentucky show McConnell leading in his own reelection bid. FiveThirtyEight.com has him winning 96 of 100 election outcome models. But if he is no longer the majority leader, his ability to damage our democracy and the common good will be strictly limited.

Holding onto the majority was always going to be a tough slog. Republicans are defending 23 seats compared to only 12 seats the Democrats must defend. So far, it looks like the only Democrat who is likely to lose is Alabama Sen. Doug Jones, who won a special election in 2017 against Judge Roy Moore, the Bible-toting judge who was accused of sexual misconduct. Now, Jones faces Tommy Tuberville, a former football coach at Auburn University.

Republican incumbents Sens. Martha McSally in Arizona and Cory Gardner in Colorado appear headed for defeat, while Susan Collins in Maine and Thom Tillis in North Carolina are both slightly losing according to FiveThirtyEight. Sen. Joni Ernst in Iowa is in the only race rated a toss-up. But, in close races, if the top of the ticket goes overwhelmingly one way or another, not only would Ernst likely lose, other close races would follow. Incumbent Republican Sens. David Perdue in Georgia and Steve Daines in Montana are in close races and, in the case of Montana, facing a formidable opponent in the person of that state's popular governor, Steve Bullock. 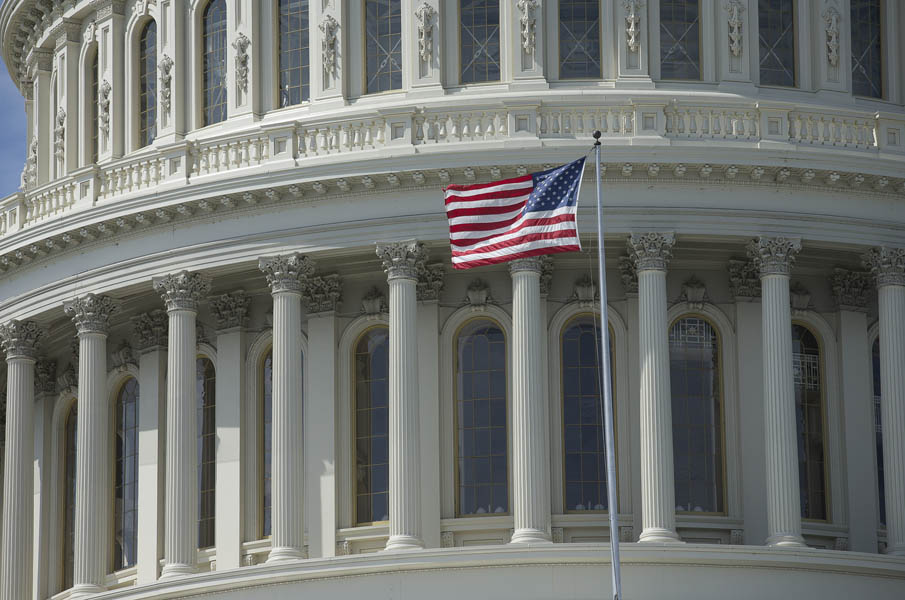 Already, you are seeing the beginning of a Democratic tsunami in the fundraising contest, which, according to Politico, has Republicans "freaking out." Traditionally ruby-red states like Alaska and South Carolina are suddenly viewed as competitive, if still likely Republican, in large part because of the infusion of campaign cash.

In fact, it is difficult to think that more campaign ads will shift the presidential race one way or another, but in Senate and House races it can still make an enormous difference. There are plenty of studies indicating that most Americans cannot name their members of Congress or what party they belong to, so creative advertising, and the amount of it, makes a difference.

FiveThirtyEight looks at how gerrymandering congressional districts in Virginia gave the GOP control of that commonwealth's congressional delegation throughout the last decade, and how different approaches to redistricting would yield different results. In an act that is the moral opposite of McConnell-style politics, the Democratic legislature in Virginia relinquished its control over the redistricting process next year, creating a nonpartisan commission to redraw district lines. The campaign for nonpartisan redistricting, led by former California Gov. Arnold Schwarzenegger, may be the most important moral movement in favor of our democracy in our time. Voters should get to pick the politicians who will represent them; politicians should not be able to select which voters make that choice.

In 2019, the U.S. Supreme Court ruled in Rucho v. Common Cause that the federal courts had no role in reshaping congressional districts, that the Constitution vested this power in the political branches of government, and that appeals to the courts would be rejected. The court recommended voters demand nonpartisan commissions by referendum, as had recently happened in Colorado, Michigan and Missouri. But, popular initiatives of the kind cited by Chief Justice John Roberts in Rucho have been thwarted time and again by Republican legislatures.

Catholics believe that the purpose of government is the furtherance of the common good. The current regime of partisan gerrymandering moves government in the opposite direction, pulling candidates in highly partisan districts to the extremes because they do not have to fear a loss in a general election, only in a primary. And, taking away the powers of the Senate Majority Leader from Mitch McConnell is so obviously an advancement of the common good, no argument is needed.

On election night, don't run to the kitchen for more popcorn or another drink once the presidential contest is decided: The future of our democracy will be strengthened or weakened by the down-ballot races as well.