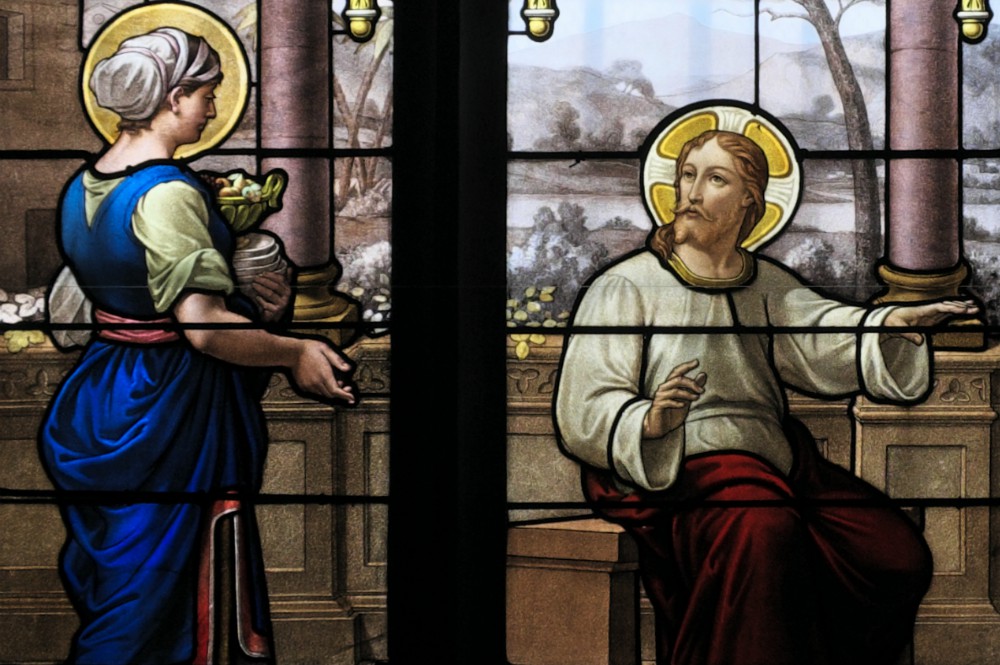 We all need to have both our Martha moments — busy with household chores, as we Christians can become easily busy with politics — and our Mary moments. Now, as the end of this election nears, it is time for some Mary moments. (Wikimedia Commons/GFreihalter)

Tomorrow may well be the most consequential election of our lifetimes. We hear that every four years, but this year it happens to be true. If Donald Trump wins reelection, the very future of our democracy is in grave danger. The revelations last week of improper pressure being brought to bear on prosecutors in the Southern District of New York over its investigation of a Turkish bank is only the latest small-d, democratic-norm domino to fall.

This summer, the videotaped murder of George Floyd by a white policeman in Minneapolis served as irrefutable evidence of how far our nation has to go in addressing the disparate treatment of Black Americans. That disparate treatment goes well beyond police brutality to include systemic discrimination in housing, systemic denial of access to credit and other means of wealth accumulation, systemic impediments to voting, systemic failure to provide quality education. The list goes on.

To address the still-persistent racial injustice in our society, we will need legislation to be sure, but legislation will not be enough. After all, murder was already against the law when Derek Chauvin placed his knee on Floyd's neck. We need hearts to change and that is always a complicated business.

Politics is an important part of the Christian vocation, but it is only part, not the whole, and it is not even the better part.

The culture needs to change to make it easier for hearts to change, and the culture will only change when hearts make it change. It is like the old New Yorker cartoon showing a chick and an egg in bed, smoking, with the caption, "Should we tell them?"

Whichever comes first and no matter how change happens, we need it, we need it badly. The results of tomorrow's election, like the election of our first Black president in 2008, may help or hinder the culture rid itself of racism, but it can't achieve that on its own.

In Catholic social doctrine, politics is about advancing the common good, defending and promoting human life and dignity, strengthening the bonds of solidarity and organizing solidarity through the principle of subsidiarity. In this fallen world, however, politics is about power, and nothing is so antithetical to power as love.

In our constitutional system, the president is not only the leader of government, she is the head of state. The latter office involves those symbolic roles that require the marshaling of love. "It has become too easy in recent years to define our neighbors as 'others' rather than children of God and fellow Americans. It has to stop. We have to strive harder to come together, and to love our neighbors as ourselves. That is the work we are all called to by God," Joe Biden said in an op-ed in The Christian Post last week. The "we" there is all Americans, not all politicians and not all Democrats. It is a start.

Last week, I called attention to some of the more facile and ridiculous things clergy have said about this election. After tomorrow, the bishops need to rethink their entire approach to witnessing in the public square, because their previous witness has not been characterized by love.

It is time to let the culture-warrior model pass into retirement along with former Philadelphia Archbishop Charles Chaput, who did so much to champion it. The love the culture-war approach entailed was a condescending, paternalistic love in which the bishop knows best. It never really succeeded, and it always fed the divisions in society.

Before the bishops think of new approaches to politics, they need to stop for a moment and think more deeply about how the church can help build up the culture. Building culture always unites, and the divisions in American life are raw.

During the 1996 campaign, the late Jean Bethke Elshtain published a wonderful little book titled Augustine and the Limits of Politics. I commend it to anyone who has to mount a pulpit next weekend. Having debunked Cicero's definition of the commonwealth, she writes:

This is where love comes in — love of God and love of neighbor — and this is where justice comes in as well. Augustine's alternative definition [of the commonwealth] starts with love. "A people is the association of a multitude of rational beings united by a common agreement on the objects of their love." It "follows that to observe the character of a particular people, we must examine the objects of its love." No single man can create a commonwealth. There is no ur-founder, no great bringer of order. It begins in ties of fellowship, in households, clans and tribes, in earthly love and its many discontents. And it begins in an ontology of peace, not war.

I am not sure how I can begin to build a "tie of friendship" with the person who has four handmade signs on their lawn: "Trump2020" reads the first, "Trump2024" reads the second, "Trump2028" reads the third, and the last reads "Trump4Ever." But I know that it is incumbent upon me to try.

Elsewhere in that same book, Elshtain identifies a principal culprit in the demise of a commonwealth, what she, with Augustine, calls "false pride" but that we might also recognize as libertarianism. It is difficult to read her words and not imagine she had a premonition of the age of Trumpism:

False pride, pride that turns on the presumption that we are the sole and only ground of our own bring; denying our birth from the body of a woman; denying our utter dependence on her and others to nurture and tend to us; denying our continuing dependence on friends and family to sustain us; denying our dependence on our Maker to guide and to shape our destinies, here and in the life in the City of God for which Augustine so ardently yearned, is, then, the name Augustine gives to a particular form of corruption and human deformation [emphasis in original].

These are words for all citizens to ponder in the days ahead.

I am not advocating any kind of quietism. Politics is an important part of the Christian vocation, but it is only part, not the whole, and it is not even the better part.

I think of the account of the Master's visit to Martha and Mary recorded in the Gospel of Luke, Chapter 10. Martha is busy with household chores, as we Christians can become easily busy with politics. Mary sits at the Lord's feet and listens to his teaching. Martha asks Jesus to tell Mary to help her with the chores, and he replies, "Martha, Martha, you are anxious and troubled about many things; one thing is needful. Mary has chosen the good portion, which shall not be taken away from her."

My dear mother hated that passage of Scripture. I would always assure her that we all need to have both our Martha moments and our Mary moments.

Now, as the end of this election nears, it is time for some Mary moments.

Augustine served as inspiration for British diplomat Cecil Spring Rice, who wrote a poem titled "The City of God" at the beginning of the last century. The poem provided the lyrics for the hymn "I Vow to Thee, My Country," which is often sung at state religious services in the United Kingdom. The first verse is deeply patriotic and, in the nature of such things, treacly and regrettable. The second verse, however, provides beautiful words — some food for thought — for all of us as we contemplate the importance, and the limits, of politics. I shall conclude my thoughts today with them: